Once upon a time, video storytellers had to have the backing of deep-pocketed television networks or film studios to do their work. Not anymore. Today, low-cost GoPros, iPhones and drones have democratized video storytelling — spanning platforms from the internet to broadcast television. 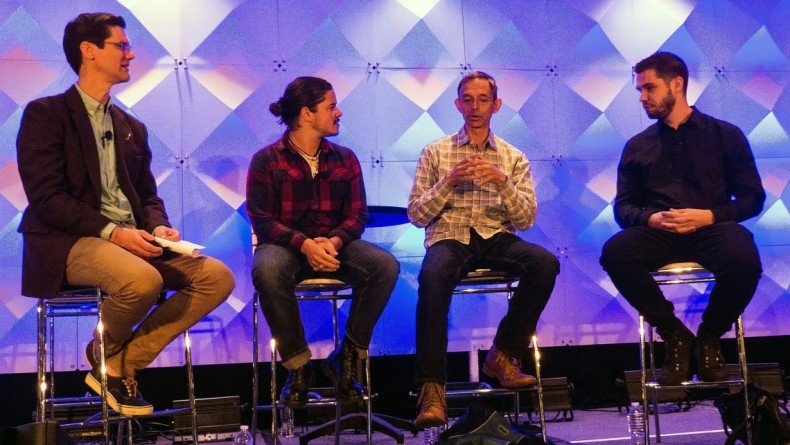 At a panel called The New Technology of Storytelling at the Promaxdba Convention in New York City, a group of diverse storytellers who are using the low cost cameras told of their experiences and how the new technology has changed their professional lives.

Mike Castellucci, a producer at WFAA-TV, a Tegna Media-owned station on Channel 8 in Dallas, has created the first broadcast television show shot entirely on Apple’s iPhones. Today, he produces and hosts Phoning It In, a magazine style show that pushes the technological envelope. 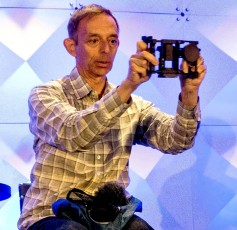 Having experimented with an early Flip camera, Castellucci was asked in 2014 by his boss if he could do an entire story on an iPhone. Out of that simple question came his all-iPhone show on the human condition in North Texas, which premiered on December 21, 2014.

“When I first went out with an iPhone from a big TV station, the subjects were visibly underwhelmed,” Castellucci said. “It was like I wasn’t there. They would ask ‘where’s the cameraman.’ I’d say ‘don’t worry, it will be all right.’ But since then it has gone the opposite way. It’s really much easier now. With a little ten year old subject, the iPhone was really native to her. When I shoot with an iPhone, people seem to be very relaxed and are not intimidated at all.”

Castellucci said though anyone can use the new tools for production, most still don’t. That’s not because there is any lack of video quality, but because not enough people have the storytelling skills to do it well. “It doesn’t matter what device you use to tell a story, as long as you do it in an emotional and engaging way.” 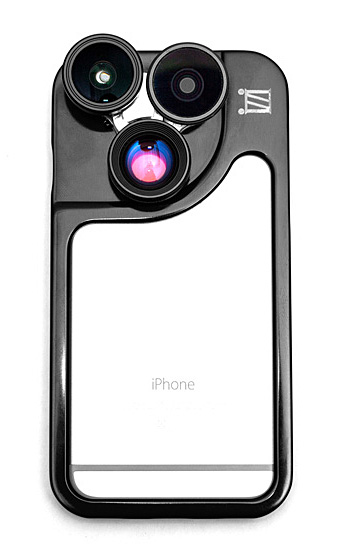 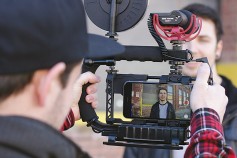 These days, Castellucci uses some accessories to gives increased production capability to his iPhone segments. He uses a three lens turret with a wide angle, a fisheye and a telephoto lens by Izzi Gadgets, a Reticam iPhone holder for his tripod and a BeatGrip Pro mount, which holds a RØDE microphone and wireless receiver. (For more information on the RØDELink wireless system see note below.)

Some tips he offered is keep the camera steady, using a tripod whenever possible, insure good audio and shoot and move frequently.

He shoots in short segments, all under two minutes each. Editing is done on a laptop with Apple’s Final Cut 7. The iPhone video is transferred first from to MXF files using Image Transfer (from Capable Bits).

“The quality of great,” Castellucci said. “When I did my first story and sent it to our editor, he had no idea we had used an iPhone to shoot the original footage. He thought we had used a full size ENG camera. That was telling in itself.” 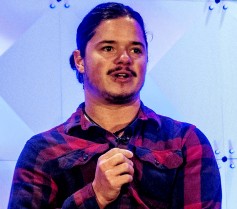 Nature videographer Filipe DeAndrade uses a combination of iPhones, GoPro and DSLR cameras on his nature shows. On a recent trip to New Zealand for National Geographic, he mixed and edited several different cameras together, using Adobe Premiere to edit the diverse footage.

“Why does our iPhone and GoPro footage look better than that of most shooters?” DeAndrade asked. “There are cutaways, there are tight, medium and wide shots, there are interesting angles, there are all the elements that make up a good film. Just with a different device. No matter what device you shoot on, you must know the rules of filmmaking and how to break them.”

DeAndrade said he has three iPhones — two dedicated to shooting video. One is waterproof in a Lifeproof case. He got dramatic shots with an iPhone when a group of explorers tried to cross a dangerous, fast moving river.

“The iPhone is insane,” he said. “It is up there with anything else. I think it might be the best action and documentary camera out there today. You pull it out and people don’t think twice. They act natural in front of it. Those moments you get with people breaking down and crying in front of the camera, they won’t do it if you have a big camera on your shoulders. But with an iPhone, they ignore the camera.” 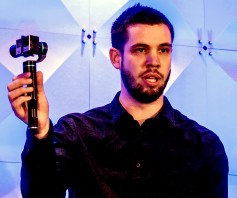 Joey Lawrence, who uses the professional name, Joey L., is a Brooklyn, New York-based professional still photographer, who uses a GoPro camera to document his photo shoots. The videos became so successful it is now a web series called “Dudes With Cameras.” The videos take a peep at life on photo sets around the world and is narrated by Joey and his crew.

“After every photo shoot, we sit around microphones — podcast-style — and reminise on the shoot we have just done. We edit the GoPro footage to our talking. The GoPro is so versitile I can give one to someone who has never filmed something before and allow them to walk around the set with it. We sometimes get some pretty stuff that way. We totally embrace the GoPro for this series,” he said.

“We use it not to look sexy or cinematic, but to play up the fact that it’s fun and we’re filming it. We also send the videos to clients to show our work ethic and how our crew works. The tools are so small that people rarely say ‘no.’ With a little GoPro, people don’t really take it seriously, although its 4K footage is beautiful. That’s how we’ve been able to get away with it.”

Joey L said when he first started using the GoPro, it reminded him of the first person perspective. “That’s because it has a slightly wide, distorted lens. When people watch more serious videos that I’ve made, they are interpreting it in a new way because it’s a new tool. It’s like coming from the eyes of someone. For me, it was liberating to use such a small tool because it allows the viewer to be in your actual shoes as you are working. Also, cutting between the GoPro and the big professional still image makes it seem like these guys are actually doing something that is good.”

The biggest plus with the GoPro, said Joey L., is a size so small that you can take it anywhere. “But because it’s so tiny, you get a lot of camera shake.” He then pulled out his GoPro on a handheld gimbal.

Tips he suggested include carefully control the exposure and shoot in Protune and neutral color settings. Also, to get much better audio, use the camera without the waterproof case. And accessorize — with tools like gimbals.

“A million different companies make gimbals like these,” he said. “This is a Chinese company called Feiyu Tech. I got it on Amazon. This thing is used on about 90 percent of the GoPro footage we do. It’s the same (stabilized) gimbal you can find on the bottom of a drone. You can walk around with this thing and it get really beautiful shots. It always feels fly on the wall.” 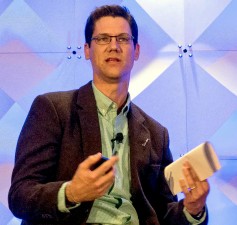 Finally, on the discussion of drones, Andy Baker, the panel’s moderator and a senior vp at National Geographic channels, noted how fast drone technology is changing. He noted two drone prototypes that he predicted will disrupt the drone industry.

“The first one is called a Lilly (from Lilly Robotics), which is in beta testing and due on the market in late 2016. It eliminates the drone operator. You wear a tracking device on your wrist and it follows you wherever you are going. It can even go under water. Another is called the Hover Camera (from Zero Zero Robotics), an ultra light weight, carbon fiber drone. All you have to do is release it and push it. It will just follow you, getting amazing 4K imagery all the way.”

Joey L used a drone in Kurdistan region of Iraq and Syria last year on a photographic story on guerrilla fighters. He brought a drone, equipped with a GoPro camera, and had the fighters operate the drone, incorporating it into the story.

Flying the drone became part of the scenes itself and he captured terrific footage of explosives that couldn’t have been gotten otherwise. “They were fighting against the Islamic state, but still had time to find use for a drone,” he said.

Yet, he warned video storytellers not to overdo drone footage. “Know the good shots and use the drone wisely,” he said. “At first, I flew it too fast and didn’t get much. But when I slowed it down and tried to get a new perspective, it worked. It is so easy to become enamored with these devices. Like shooting 3D doesn't necessarily mean that will be the main device that tells the story. Be smart about it.”

The RØDELink wireless microphone platform mentioned above uses the 2.4GHz digital band. It provides 128-bit encryption and is able to constantly monitor and hop between frequencies to maintain a strong signal over a range of up to 100 meters (over 100 yards). The receiver provides an OLED display monitoring RF level, battery status (receiver and transmitter), mute and channel selection. The receiver is simply mounted on a standard camera shoe mount, 3/8" thread or belt-clip in one of two positions. The lightweight transmitter is easily fitted to a belt or clothing and features a locking thread for reliable connection. The receiver/transmitters are paired by a simple one-button activation. The audio is controlled with three stages of gain control. Microphone and transmitter are powered by AA battery or USB connection. The RØDELink Filmmaker Kit includes everything needed to start shooting video wirelessly; a receiver, transmitter and broadcast-grade lavaliere microphone.