Beginning with IBC 2015, the broadcast and production industries have seen an increasingly large investment in IP-centric solutions being offered by vendors. While that is encouraging, customers need to be sure that the performance of a centralized solution is not compromised by a low-bandwidth network.

Traditionally, large sound desks with dedicated fader channels had line level audio or phantom powered mic level plumbed directly into the back of the desk in the sound engineers control room. These connectors were often heavy, cumbersome and lacking in flexibility. The audio signal would route its way through various Krone connectors and jack fields alongside potentially hazardous noise generators such as power and timecode.

Even with the use of integrated silicon amplifiers, the potential to generate lots of heat was extremely high and either fan cooling would have to be introduced into the desk or extremely expensive high capacity silent air conditioning had to be installed into the sound control room. The amount of power required by the desk necessitated the installation of large power supplies using iron core transformers which had the potential to generate lots of heat with their linear DC regulators. Good sound engineers can hear even the quietest fan at fifty paces and would not tolerate such noise interference in their studio.

Centralized control lends itself well to sound desks. The user interface can be physically separated from the cumbersome electronics providing better ergonomic designs, and an improved experience for the sound engineer, allowing them to mix more accurately. The option of digital signal routing such as AES gives excellent noise immunity, and this can be made more convenient by multiplexing many audio sources onto a MADI fibre system.

In the past, analogue sound desks generally had to be built on a channel per source basis. This resulted in very long desks with 32, 64 or more fader channels. Each one taking up space, consuming power and potentially going faulty and causing interference with the output mix. As the audio was routed through each channel before being mixed on busses or auxiliary feeds, one faulty component could have a cascading effect on the rest of the mix due to shared power rails. 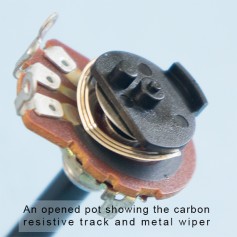 Shown above, the “pots” relied on moving a springy bit of thin metal across an even thinner carbon track, the distance travelled was directly proportional to the resistance of the carbon track, which could then be used to control an analogue filter or level control. Each channel would have to be a separate module or assembly, removable vertically through the desk so that it could be replaced if components went faulty, or the edge connector became dirty, which in turn could introduce pops, crackles and other unsavoury sounds.

Mechanical components would rarely fail completely, or predictably, or at a convenient time. But would instead spend many hours or days going faulty. As the components started to wear, the connections would become intermittent, and noise or voltage spikes would be modulated onto the audio signal. This sporadic state could be very difficult to detect and fix, hence the reason the channels had to be removable. Many a maintenance engineer has had to swap out an audio channel module whilst on-air, take the control module back to the maintenance room only to frustratingly leave it on soak for days, as the faulty component refused to make itself known.

Centralized sound desks can easily overcome the power, space and reliability problems. As the sound is routed in dedicated hardware in the racks room, the audio source can generally bypass the studio control room, power supplies, timecode, and other interference generators. With the help of relatively simple digital electronics we can reduce the number of physical channels actually needed on a desk, whilst not compromising the number of source channels provided for.

In essence the input audio becomes routable, or assignable to several audio busses. When a channel is selected, motorized pots and faders can take the values of pre-assigned channels. Or LED indicators and electronic displays can be used to remove any mechanical requirement at all.

Advantages of digital rotary encoders include construction that is entirely optical, no metal contacts to wear or cause noise. They can also provide “limitless” turns because the decoding circuitry merely counts up or down depending on the direction the knob is turned.

Digital pots are significantly more reliable, the remote hardware solution can use continuously rotating controls which are essentially opto-couplers counting the number and direction of rotations. Digital pulses are sent back to the processor in the racks room, which in turn maps and presents them to registers in DSPs, providing the relevant function, such as level control or frequency attenuation in a filter.

With the decrease in the number of channels we also reduce the amount of electronics in the sound control room resulting in reduced power consumption, heat generation and air conditioning. We can even use a switch mode power supply as the desk becomes a remote device and doesn’t process any sound.

Although we regularly see “no food or drink” signs in studios, commercial facilities are often compromised when enforcing this due to maintaining the needs of the paying client. A cup of coffee spilled into an analogue sound desk could cause a great deal of damage.

While similar damage would be caused to a remote control sound desk, the disruption would be less severe as most of the audio processing takes place in the racks room. The fix might be as easy as replacing the damaged module with a spare or even borrowing one from another studio.

The centralized hardware philosophy can easily spread throughout the rest of the studio to include equipment such as talkback, vision mixing, lighting control and in vision graphics. With the adoption of Ethernet networks in television studios, the process of centralizing hardware becomes even easier as we no longer have to run additional bespoke control cables such as RS422. Instead we can use IP control over standard IT CAT6.

Care has to be taken however with this type of solution. The response time of the control equipment is critical to adoption by users, and there must be no perceivable lag in control response. When a sound engineer moves a fader they expect to hear a predictable response immediately. In congested networks, response times could be delayed, or in the worst case scenario become unpredictable.

Well defined networks, using VLAN’s for example, will be required so that general office traffic doesn’t interfere with control of the broadcast kit. This is a relatively simple process for the IT networks team but is something that must be implemented before the installation is commissioned.

Centralized hardware control has many advantages and the distance from the processing kit is only limited by the response time of the underlying control network.