The number of vendor specific playout and edit systems continues to increase year on year. Consequently, the different types of media and metadata files required by broadcasters follows suit. The unfortunate result is a complex system that compromises quality through multiple transcoding. All this increases the potential for lost air time because of human error in highly automated playout systems causing unnecessary delays in the programme chain.

Typically, a post house may deliver a media file to two different broadcasters having two different file format delivery requirements. The post house may find themselves creating one file as an MPEG2-Intra100 with a separate XML metadata file, while the second broadcaster may require a DVCProHD in an MXF wrapper with embedded metadata. The number of combinations of essence files, wrappers, codecs, metadata and file types is immense. When combined with the ever increasing time pressures technical teams are under the result is a system which is extremely problematic and potentially unstable.

As a solution to this the UK’s DPP, in collaboration with AMWA in the USA, have worked together to define a set of specifications to harmonise the transfer of media files between broadcasters and their suppliers. With the introduction of common audio and video compression formats, the quality of media has been maintained by reducing the number of format transcodes in the programme chain. This reduces human intervention so the highly automated playout systems can continue to operate smoothly. In addition, the DPP’s certification process gives broadcasters added piece of mind knowing that the files they receive meet a well understood specification. 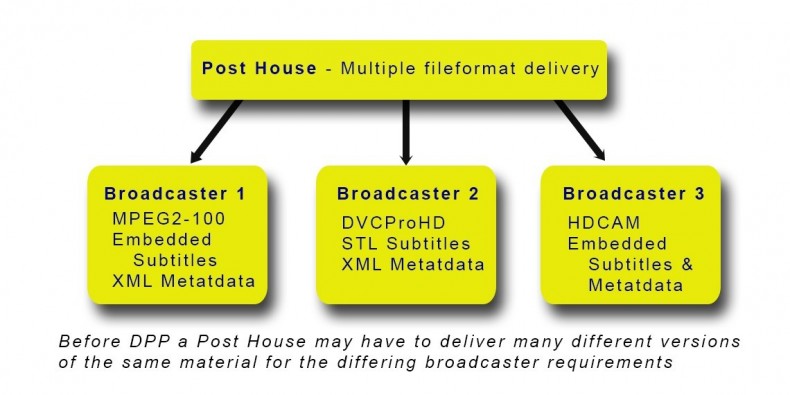 DPP is not a standard

The DPP advises that it is not a standards body, but is instead a group of members that uses its knowledge of business needs and requirements to make the already existing standards effective in real applications. This means its more focused on application and interchangeability of media between broadcasters and their suppliers rather than the nut’s and bolts of engineering standards as do organizations such as SMPTE and EBU.

The MXF standard is a generic bag of tools defined by SMPTE that requires further definition to create a useable useful system. For example, the MXF spec may provide for the use of a codec, but does not define the codec and it’s up to the user to specify it. Organisations like AMWA through their specifications AS11 define the type of codec to be used. The DPP have taken AMWA’s AS11 and further enhanced it through shims to create the AS11-DPP-HD specification. Essentially this defines parameters such as the audio and video codec, closed captions and the layout of the material within the MXF format.

Through AS11, DPP chose the AVCIntra100 codec for HD. This codec has two important features, it uses highly efficient H264 compression, and it uses intra coding at 100Mbits/sec. Intra coding is important as the losses in compression are limited to those created in single independent frames and motion compensation is not used in this application. With the high bit rate and intra coding, the concatenation effects of further transcoding are greatly reduced compared to those using long GOP structures.

Metadata is another key element in broadcast media and has become more important in recent years as the granularity and detail of data available is enhanced. Before the adoption of DPP, many broadcasters and post houses tended to distribute their metadata as separate XML files. This posed problems including version control, the ability to keep the XML and media files together, and the XML schema, or definition was generally different for each broadcaster or even different in departments within the same broadcaster suffered with similar problems.

Furthermore, the integrity of a file could be compromised because there was no true audit process. That is, when a file or group of files were delivered to the broadcaster, they could be changed or corrupted and as there is no overall checksum or validity check, disputes about whether files sent were the same as ones broadcast could easily occur. As the DPP has formalised the format, errors can be more easily detected and the areas of demarcation between supplier and broadcaster are better defined.

EBU R128 Loudness has recently been introduced into Europe with the normalisation of audio dynamic range transmitted by broadcasters. Instead of using VU or PPM audio meters which measure the power or peak voltage of an audio signal, R128 measures the audio levels relative to the human perception of hearing as it is frequency dependent and not linear. R128 measures loudness by using a series of filters modified with weighting to model the human hearing experience. DPP have applied a long term integrated level of -23LUFS for audio loudness and have further defined the short term and instantaneous levels in their specification, the end game being to give the viewer a more enjoyable listening experience.

The DPP have gone one stage further than a traditional file and media specification and applied quality control to the media. Quality control seeks to validate the essence media including the Harding Photosensitivity Epilepsy test, file wrapper types and metadata. In an interesting departure from normal workflows, broadcasters have effectively moved the responsibility of QC back to the suppliers. 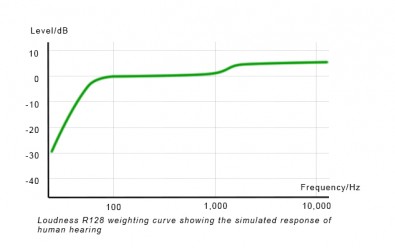 Commercials and promotions have their own special version of the DPP specification for both HD and SD. The main difference from long format programming is primarily in the audio specification. An intentionally silent version of R128 allows for some material to be less than -23LUFS. This may seem a little convoluted as R128 was to normalise audio with the goal of preventing viewers from reaching for the remote control to mute the sound during a commercial break. Although some commercials used perceptibly loud and highly compressed audio, this is what the broadcasters and their suppliers have agreed upon. The DPP have provided an exception process to allow commercials to be quieter than -23LUFS for pre-agreed commercials.

In summary, the DPP have standardised the delivery of media to broadcasters from the workflow and business point of view, have greatly simplified the system and made it more reliable and robust. They are now doing the same with UHDTV.

Tony Orme will be providing a series of monthly tutorial articles to The Broadcast Bridge readers on topics of high interest. You may respond to him about these articles in the comment box below.