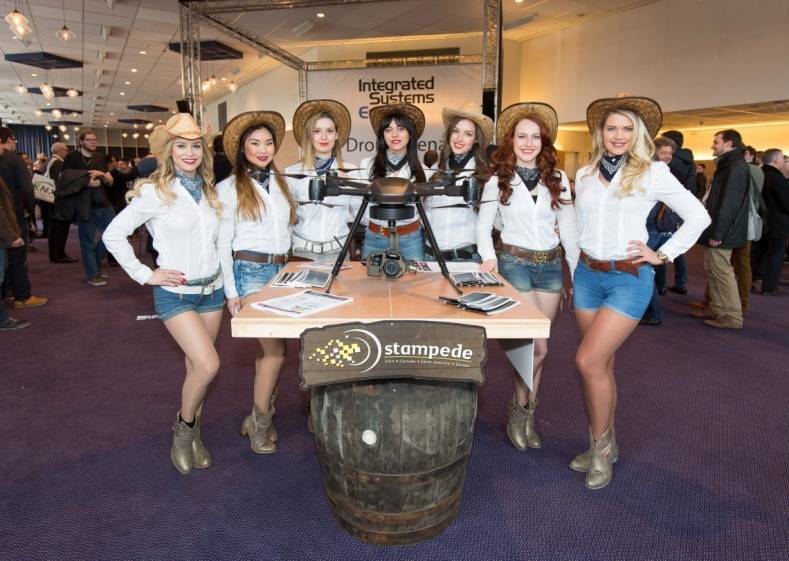 ​Every video related trade show has to have an area to fly drones, it seems, and professional AV show Integrated Systems Europe (ISE) is no different. The Drone Arena has met with a “phenomenal” response on its debut according to Mark Wilkins, CEO, Stampede Global, a proAV distributor. His company is sponsoring the exhibit which features products from DJI, DragonFly and Yuneec. What is different is that drones for the professional or corporate AV market have arguably more business potential than the more narrowly focussed broadcast and film capture application.

“People are getting the message that there is a real growth market for pro AV in selling drone video systems,” said Wilkins. “Most dealers don’t currently see drones as a core part of their business but a drone video system can be a big ticket item when used to solve a real world problem.”

Applications include home security and emergency response situations in which drones flying above fire incidents would transmit live video and interface with videoconferencing system for crews to manage the operation.

However, there’s a problem says Stampede Global's President and COO, Kevin Kelly; the current lines of distribution aren’t set up to properly explore the market’s potential. A huge opportunity is knocking on the door of the AV/IT integration industry.

“We’re on the front side of a very large innovation cycle that our industry hasn’t seen since the cell phone went from the military battlefield to the construction site,” explains Kelly. “That was the start of something big but at that time people didn’t recognise the opportunity for phone software and apps, and the tremendous innovation that occurred there. I think this is very similar, simply because of the number of applications that unmanned aerial vehicles can be used in is so high.

“The DaVinci Institute cites 10,000 applications and that we’re on track for a billion drones to be deployed by 2030. When you think about the number of uses, the number of units already being sold now and the fact that the innovation is just starting with a lot of those use cases… it’s certainly a pun, but the sky’s the limit for this category.”