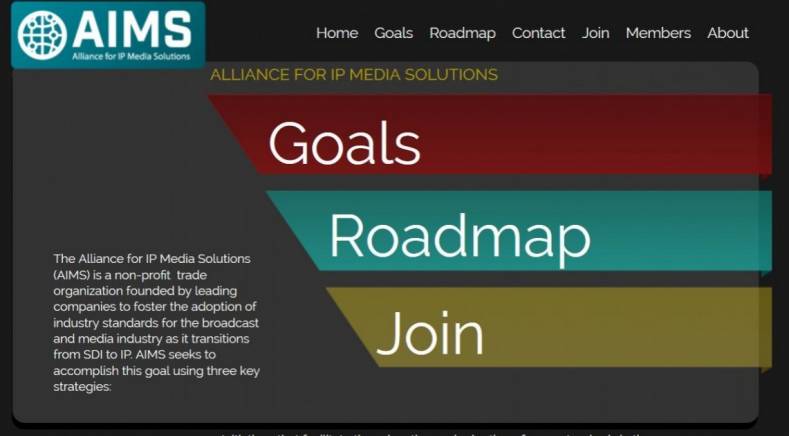 A group of manufacturers have come together to form a group promoting a set of open standards for transitioning the industry to IP. Founder members Grass Valley, Imagine Communications, Lawo, Snell Advanced Media and Nevion are initially promoting promoting the implementation of SMPTE 2022-6, audio over IP standard AES67 and VSF technical recommendations TR-04 and TR-03 as the Alliance for IP Media Solutions (AIMS).

There are a number of other industry initiatives with which AIMS competes and also overlaps. These include Sony IP Live Production, ASPEN, which is promoted by Evertz and others and the compression focused Tico Alliance.

SMPTE 2022-6. The most widely implemented standard in the industry.

AES67 standard for audio over IP.

VSF TR-04. A technical recommendation that prescribes the use of SMPTE 2022-6 for video and AES-67 for audio.

VSF TR-03. A technical recommendation that simplifies production and virtualization using IP. VSF TR-03 defines RFC 4175 as the standard for carrying video essence. This standard leverages RTP as the delivery protocol and has been in place since 2005. For audio, VSF TR-03 uses AES67.

AIMS argues that VSF TR-03 “is simple, has less overhead, is more powerful than other standards, and because it is built on an existing history of understood, tested and available technology.”

AIMS says its members believe that this roadmap, including VSF TR-03 based systems, will be implemented in practice next year.. It states: “this roadmap is the only IP standards roadmap in our industry that has been developed using a collaborative, non-proprietary approach.”

It argues that this approach has the support of more companies than any other approach; is well-suited to future needs such as virtualization/software-based implementations and it enables simpler implementations (e.g higher leverage of COTS IP switches and direct interface to audio equipment without the need for conversion gear).

“The broadcast and media industry is facing monumental changes in how video is produced, managed, and consumed, and this is driving the need to rapidly transition from traditional networks to much more efficient and flexible IP technologies,” said Steve Reynolds, CTO, Imagine Communications. “Critical to this transition is the adoption of standards that enable open and interoperable mechanisms for the exchange of video, audio and metadata over IP. This open standards approach avoids vendor lock-in and will encourage innovation and interoperability to accelerate the modernization of broadcast and media facilities.”

Andreas Hilmer, Director Marketing & Communications with Lawo, says, “Thanks to the collaborative work already performed in SMPTE, VSF and AES, our industry has built a solid basis for a sustainable transition to IP. AIMS’s support of open standards and technical recommendations such as TR-03, TR-04 and AES67 afford us an opportunity to eliminate the fragmentation of implementations that our industry has endured over the last 20 years. It’s our big chance to avoid repeating expensive and time-consuming mistakes of the past.”

AIMS says it will work with the Video Services Forum (VSF), SMPTE, and the EBU, to advance new standards by providing support and testing in real-world environments. 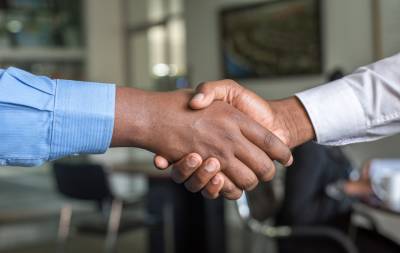