A White Paper from Media Links

Huge quantities of ink and pixels have been spent extolling the virtues of an all-IP infrastructure for a modern media production facility such as a broadcast studio or and IPTV head-end. Today, Media Links is one of the only companies in the world that has successfully installed complete, IP-based studio systems for global clients. By integrating all of the video, audio and data flows onto a common platform, huge up-front savings and continuing cost reductions can be realized.

The primary advantage of an IP-based system is the convergence of multiple signal formats onto a comprehensive, distributed IP switch fabric that seamlessly transports kilobit-speed data signals alongside multigigabit uncompressed video flows. Media production facilities benefit by not having to purchase, install, manage, or maintain the multiple signal routing systems that are normally required to switch different types of compressed and uncompressed audio. A converged IP backbone dramatically increases system flexibility, allowing new applications, bit rates, and signal formats to be added to the core switching platform merely by adding a new type of interface card.

This is a vast improvement over traditional stored control systems implemented on standard enterprise or carrier data routers.

Each of the signals can be routed independently in a fully enabled, multicast controlled environment allowing for an ‘any to any’ combination of outputs through the switch fabric. Capacity of the switch is limited only by bandwidth, not by the total number of signals. This allows a single 10GbE port to handle up to six uncompressed HD signals, thirty SD-SDI signals, ninety 100Mb DVB-ASI streams or any combination totaling the 10GbE rate limit. Literally thousands of signals can be controlled and switched through a fully configured system, far exceeding the capacity of even the largest cross-point video router.

Broadcasting stations have been distributing and exchanging content mainly as SDI signals. With the move toward SMPTE 2022 video over IP standards and file-based broadcasting workflows, broadcasters are looking for ways to handle streams and files in a unified manner. By leveraging Ethernet to act as the unified core switching fabric, broadcasters and service providers are able to maximize footprint, power and future proof IP switching technology.

Below is an example of how native SDI sources are translated to SMPTE 2022-1/2 and -5/6 IP signals, which provide the gateway between the legacy baseband environment and today’s next generation IP routing capabilities. 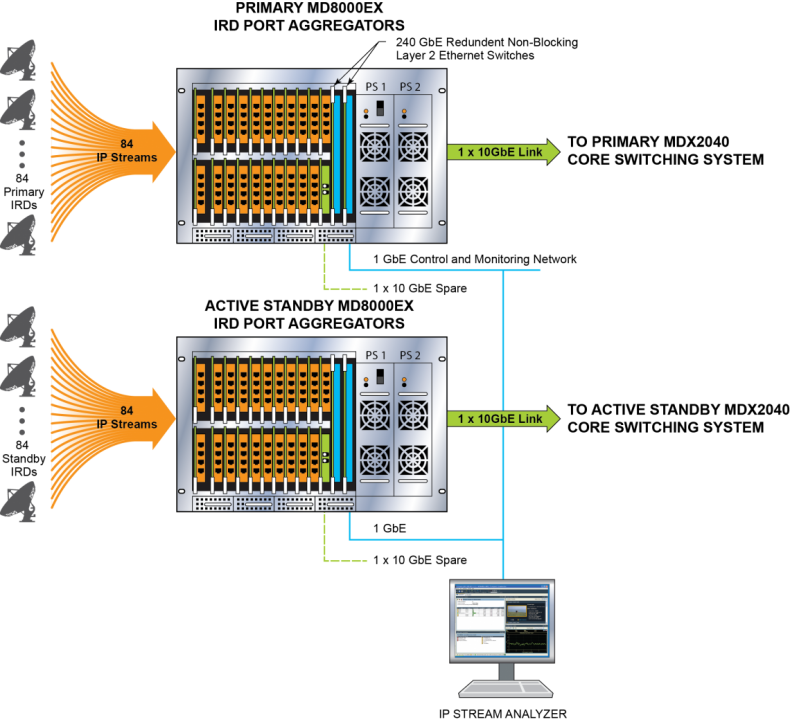 As broadcasters and service providers continue to transition away from the world of baseband, the Media Links IP Switching Solution is designed from the start to handle native baseband signal types and seamlessly transition towards an IP media flow.

Uncompressed HD-SDI signals are multiplexed into a single stream of 10Gb/s packets, whereby the packets are duplicated and fed into IP video routers, which switch them to specified destinations. The MD8000EX can act as a single signal aggregator for Video over IP and legacy DVB-ASI and all SDI formats to IP encapsulation. The key feature is the ability to translate the same level of resiliency and reliability that has been standard in the industry to an all Video over IP solution.

In comparison to the mixed signal environment, the IPTV Cable Head-End signals are currently delivered as MPEG-2 TS over IP via Satellite. Today’s integrated Satellite receivers / decoders (IRDs) supports both a baseband DVB-ASI and MPEG-2 TS over IP (SMPTE 2022-1/2) hand-off. The need to support both primary and secondary IRD’s allows for a fully diverse system. As the signals are individually routed and transmitted to the primary and ‘active standby’ core IP Switch, any stream can be switched to IP stream monitor ports to verify signal integrity throughout the system. 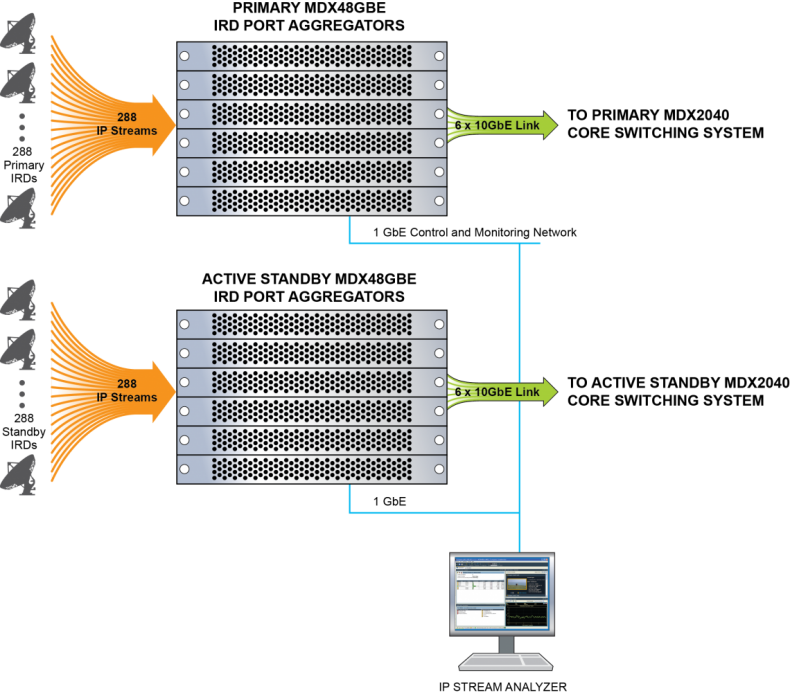 By leveraging the high density and small footprint of Media Links Layer 2/3 IP switches, the IRD aggregation solution is scalable and supports over 288 MPEG2TS 81Mb IP streams in a 6RU footprint. Each of these streams can be multiplexed over diverse 10GbE links to primary and standby core IP switches.

The diagram below highlights the ‘end to end’ connection points. A distributed architecture is achievable not only from the internal workings of a Broadcast or IPTV plant, but also from across a regional or national network. It provides the inherent benefits of utilizing low latency, jitter-free IP transmission to interconnect all of the local and remote locations, while still maintaining a single IP switch presence for managing streams across the entire network deployment. 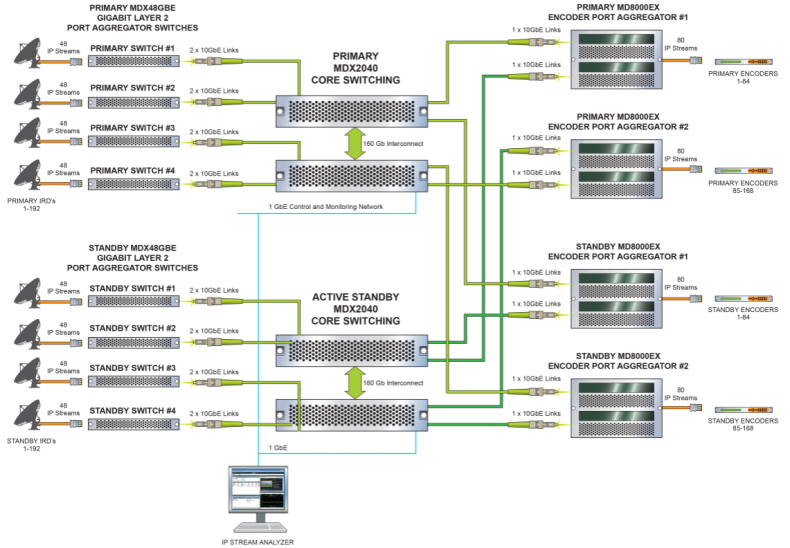 Independent MPEG2TS over IP streams are switched from the primary and standby IRD Aggregators through the primary and standby core switches and then presented to the Encoder Aggregator at the egress of the network. Signal and route diversity is maintained across the entire solution and simple addressing of individual streams allow for management of the unique streams. 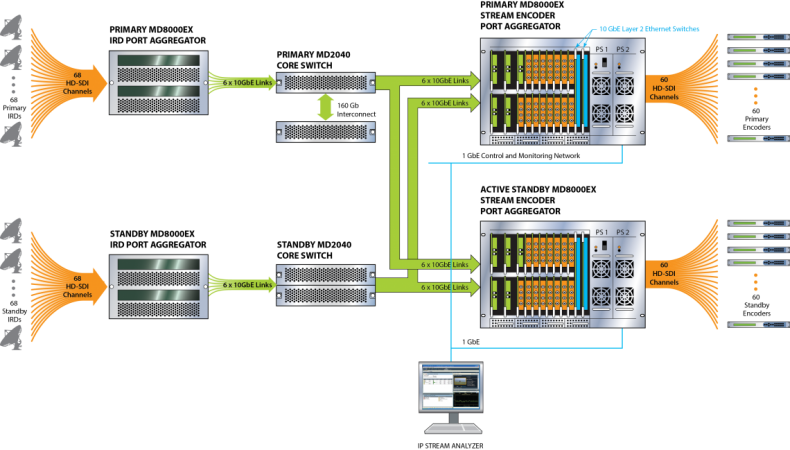 In the application diagram below, the MD8000EX acting as an encoder aggregator is designed with diverse 10Gb links and is able to seamlessly switch between 84 individual IP streams in the event of an IRD failure or service interruption along the primary signal path. The stream selection process is performed at the MD8000EX receive module by either a fully integrated MPEG2 TS decoder or 10/100/1000BaseT egress port, and is capable of supporting sub 16ms switchover times between the primary and standby IP stream.