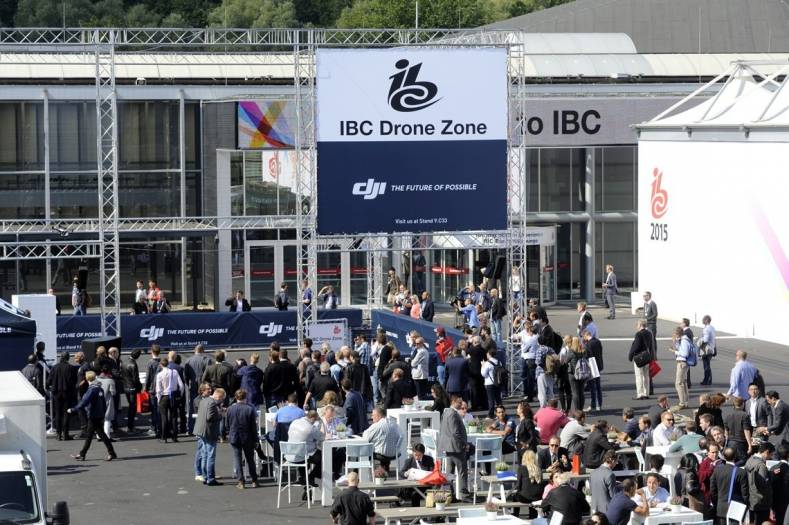 The drone zone was a popular attraction at IBC. Image courtesy IBC.

I have been musing on the recent IBC and recalling what were the hot topics, then contrasting them with shows of a decade past. There is growing interest in IP as a replacement for SDI, in 4K, in cloud services, and not to be forgotten—drones. The latter seem to bring out the schoolchild in engineers, memories of building plastic model aircraft and playing with toy helicopters. But where was the real buzz, the noisy crowded stands of the past?

Do you remember when all the fan-boys crowded the booths watching demos of the latest software for post-production? They were exciting days, when software was breaking really new ground. The post products have now settled into incremental updates, with major innovations few and far between. Linear, tape-based editing has now long gone.

Software products running on commodity platforms became the norm years ago in post-production. They have been there and done it; seen Fibre Channel come and be eased out by IP, seen all manner of storage: iSCSI, DAS, SAN, NAS. For engineers in post facilities, the IT world is commonplace and the cloud beckons.

Meanwhile, in live operations the IT world is still novel. But what does it offer? Broadcast has lived in a parallel world to IT, where SDI and MPEG transport streams carry live video in real time. In the data world IP reigns supreme, the ubiquitous carrier. Other sectors like telecommunications have moved through a number of specialist standards including frame relay and ATM to adopting IP. There is an inevitability about this migration, an unstoppable movement. But stepping back, what is driving it? No media business is going to move to IT for technologies sake; there must be sound business reasons.

Revenues for the IT sector in 2016 are forecast to be in the region of $1500 BN. Contrast that with the broadcast manufacturing sector with annual revenues estimated to total less than $10 BN for 2015. Talk about whales and minnows. Scale brings economies. Cost like R&D can be recovered from much larger sales volumes, meaning lower prices. It’s difficult to say what savings result from the move from specialist SDI interconnects to ubiquitous IP, but my straw poll at IBC indicated that broadcasters could see as much as a 50% reduction in cost of ownership of their production and distribution platforms.

Why not rush in? Well, it’s only recently that the standards have evolved to handle all those nitty-gritty issues like audio-video sync. Then there is processing power. Much of post-production uses proxies to save data rates and processing demands. There is frequently a wait for rendering, it’s not quite real time. These issues are reducing, that old Moore’s law again. But video always leaps ahead. HD to UHD, increasing data rates by nearly ten times. 10GbE infrastructure is very affordable, but you won’t get uncompressed 4K down a 10 gigabit pipe. 40Gb products are plentiful, but still expensive. However, this is jumping the gun. The vast majority of broadcast is still SD and HD, and they are a good fit with 10GbE, especially when compressed.

Just supposing the move to IP for live production does deliver big cost saving, what impact will it have? Live production has always been expensive, and requires special skill sets. It’s been the domain of broadcasters and events specialists.

Millions of people own non-linear editing software, running it on commodity platforms, even mobile devices. Will the advance of IP into the live market open new opportunities? The education and corporate communications sector could well benefit, the production of live streamed events becoming more affordable.

Right now, live events are the USP of broadcast. IP could open the market to new players, just as OTT has challenged episodic television with VOD libraries.