Manual quadcopter piloting is like walking a puppy on a thread leash. Photos courtesy DJI.

During the first week of March 2015, Reuters reported more night-time drone flights over nuclear power facilities and sensitive sites in Paris. A French government spokesperson said “We need to be very vigilant on this.” French Interior Minister Bernard Cazeneuve said he wanted to equip police with "new legal tools" to crack down on the illegal use of drones in sensitive areas. Jammers anyone?

Be careful where and when you fly. Outdoor nighttime flying is banned in many locations around the world. As you learn to fly, you’ll know why. We now return to our pre-flight briefing.

DJI is a leader in the higher-end of multi- and quadcopters, and their least expensive model starts at about $600 USD. “Toy” quadcopters, are generally defined as those costing about one-tenth that price or less. Aficionados prefer the term “hobby-grade”. They come as a ready-to-fly kit complete with a dedicated hand controller transmitter and charger. Hand controls on controllers for most quadcopters, from a $20 USD toy to the most expensive of the elite, operate similarly.

Flight of the thumbs

The basis of all quadcopter hand flight controllers are two joysticks with the same functions. That two-thumb operation commonality is what makes learning on a toy an easily affordable and effective basic flight-training opportunity.

One difference between the least and most sophisticated hand controllers is the display or displays. What is displayed and how easily the display is observed and read while flying? Another difference is access to automatic and automated flight functions. How difficult is it to navigate menus during flight? 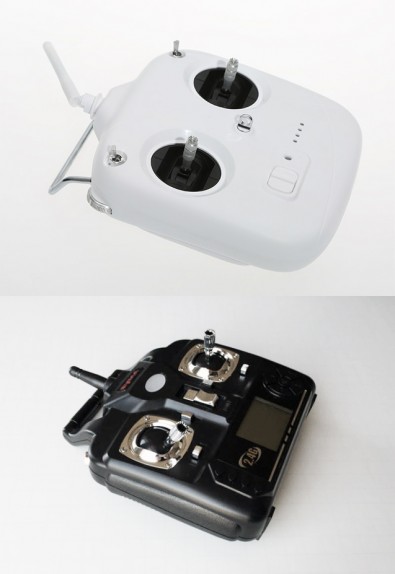 The left joystick moves up and down for altitude control. Some call it the throttle or lift. The up-down axis of the left joystick doesn’t spring return to center, so it has a cruise control feel. Moving the left joystick right or left rotates the craft horizontally. It is sometimes easy to mistakenly bump the lever up or down when wanting to only move it to one side or the other for rotation which can take things out of control in a hurry. Easy does it when rotating.

The joystick on the right is for horizontal X/Y directional control, left, right, forward (towards) and reverse (away). It sounds simple enough and is, particularly if the operator is used to operating video game dual joystick hand controls. For those too busy to have mastered video game play, flying-by-joysticks will test your hand-eye coordination.

In this pre-test flight briefing, in addition to never flying in or near government-controlled airspace, there are two other rules to remember. Don’t fly out of visual range and don’t fly around or over people or crowds. The same can be said for ceiling fans and pets.

The best place to learn is indoors, preferably with a high ceiling, soft carpet and an empty room. Prepare to crash, because you probably will a few times until you get the hang of it. Outdoors takes the operational challenge to a whole new level when you add wind and branches. Outdoor operation is where GPS becomes a critical control factor.

Before takeoff, there is one more thing to be aware of that you will discover right away. Quadcopters don’t have brakes and they tend to coast with any horizontal momentum. The only way to stop under manual control is to reverse direction with the joystick, but easy does it.

With the LiPo battery charged, new batteries installed the hand controller and the right indoor conditions, your quadcopter is ready for you how to learn to fly. Before powering anything up, verify the left-hand (lift/altitude/throttle) joystick is down.

Quadcopters have running lights on all four corners that come on when powered up. They serve several purposes. One color pair of lights is on the same end as the battery, usually called the nose. It faces the pilot. The other color pair faces away from the pilot. The lights, stripes and battery are used to visually orient the craft toward the pilot so the right joystick movement matches horizontal quadcopter movement. Light pair colors vary by model.

The rear light pair blinks when the craft isn’t paired with a controller. All four lights on and steady means all is well. When all four lights start blinking together, the on-board battery is dying or about to. When this happens, most quadcopters slow down the motors quickly and give the operator at least a visual cue when battery failure and landing is imminent. Sometimes the visual warning is only a few seconds before gravity prevails. Be aware of battery flight time. Quadcopter packaging and instructions will list flight and recharging times of a particular model.

It is usually safest to power up the controller before the craft, but check your instructions to be sure. Keep your fingers and face away from the propellers when powering up the craft. The props should remain stationary but why take the chance.

When both the craft and controller are powered-up and paired, the controller will beep once or twice and the rear running light pair will become steady. Some models will need to throttle up once and beep again, then return the left joystick to full down to complete the pairing process. Others are ready to go at the first upward movement of the joystick. You’ll know that the controller and quadcopter are paired on power-up when the rear quadcopter lights stop flashing.

Most hand controllers have two or three modes of operation that set the response of the craft to the joysticks. This mode is often accessed by pushing the left joystick in, or with a button near the top left of the controller. One beep indicates the least response to joystick movement. More beeps mean more responsive. The response mode makes a huge piloting difference. More is better. 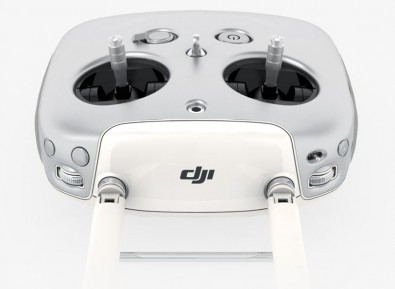 Other Phantom 2 controls are easily accessible. Joysticks are basic.

Note the locations of all obstructions and flight/landing/crash hazards in the room. The flat level surface with the fewest nearby hazards is your launch and landing pad. Set the quadcopter there with the battery and note the color of the lights facing you. With all lights on steady, don’t “floor” it! Move the joysticks gently and attempt to hover at a few feet. You’ll need to move the right joystick about to keep the craft steady in X-Y, and maintain Z and adjust X-Y orientation with the left joystick. We’re learning to crawl on two thumbs.

Quadcopters move lots of air. Hovering close to a surface such as the floor or a table is more difficult than open air. They like breathing room, usually at least 6 feet above and below. Fly 6 feet over your head and you’ll feel it.

Once you can control the hover, you’re ready to learn lateral rotation. This skill is necessary to keep your craft oriented and aligned with you and your controller. It is the left-right function of the left-hand joystick. Rotation requires physical skill because any disturbance to the up-down position of the joystick while moving it left or right will cause the craft to ascend or descend, maybe rapidly. Once mastered, you should be able to hover and nudge or continuously rotate the craft’s orientation left or right at will. If you can’t keep your craft properly oriented or adjust for it, you will lose control. Again, easy does it, if you haven’t learned that yet.

Next is learning forward-back, left-right movement at a constant altitude, very slowly at first. As you navigate about horizontally, you’ll learn how amazingly long lateral momentum can last after the joystick is again centered. Quadcopters in flight “float” like a shuffleboard puck on sawdust. It also won’t take long to discover HVAC air currents. As pilots learn the feel of the controller and craft, manual control gets easier. It will take more than a few minutes to learn in three dimensions. Short point-to-point maneuvers are good beginning practice.

That was the easy part

In a controlled situation it’s fairly easy to fly while maintaining pilot/craft orientation. In outdoor real-world flying a wisp of wind can change everything. Learn to fly with the orientation off by 90 or 180 degrees. Take off properly orientated, hover and rotate 90 or 180 degrees, and fly a rectangular point-to-point course maintaining the offset. Repeat around the compass. This skill could make a huge difference in certain situations.

Fly in small and large circles in front of you but not too close. Fly in a circle around yourself while keeping the quadcopter nose facing you. Fly in a circle with the nose pointed in the direction of travel. Do those same circle exercises but in figure eights. Now that’s a true test of eye-hand coordination and learning that will take more than a few minutes to learn. There will be a test later. 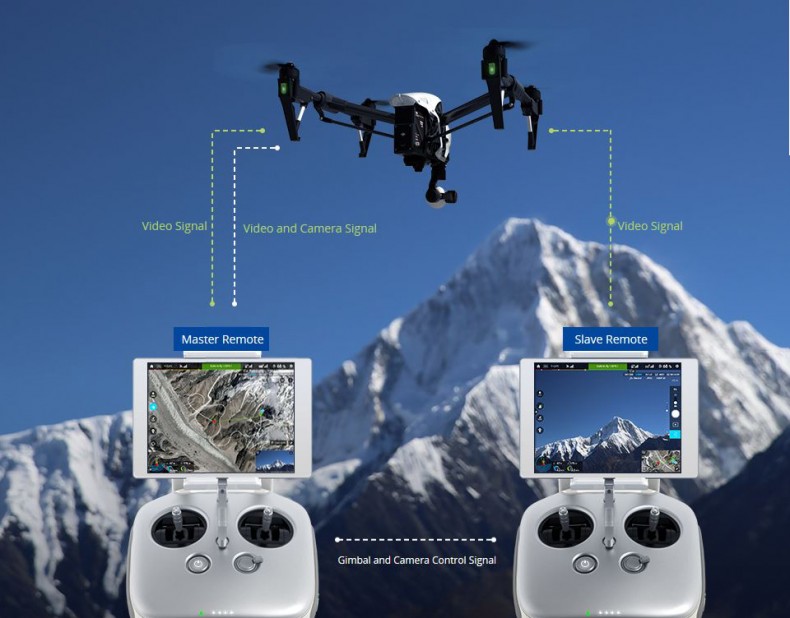 Dual controllers allow a pilot to control a DJI Inspire on one controller while another person operates the camera controls on a separate controller.

It’s easy to appreciate the power, assistance and control of GPS and other on-board navigation systems, and automated way point flying with an iPad or PC ground station. In the meantime, if you can fly figure eights with the nose pointed in the direction of travel, you’re a master.

All controllers have trim adjustments are calibrated to zero in an indoor location where there are no air currents. Manual trim can compensate for all sorts of things, so that when the joysticks are centered the craft doesn’t drift. Lift trim compensates for weight. Lift will require manual attention as the on-board battery runs down.

You will know when you’re ready to train outdoors. It’s a different world, challenging but navigable if not too windy. Flying a quadcopter is like walking a puppy on a leash made of thread. If the leash breaks, it will run off, get hurt, lost and/or hurt someone. This is why it’s best to learn with a toy.

Part 3 of this series will look at cameras, gimbal mounts, broadcast microwave transmitters and other TV devices to mount on a serious multi-copter.