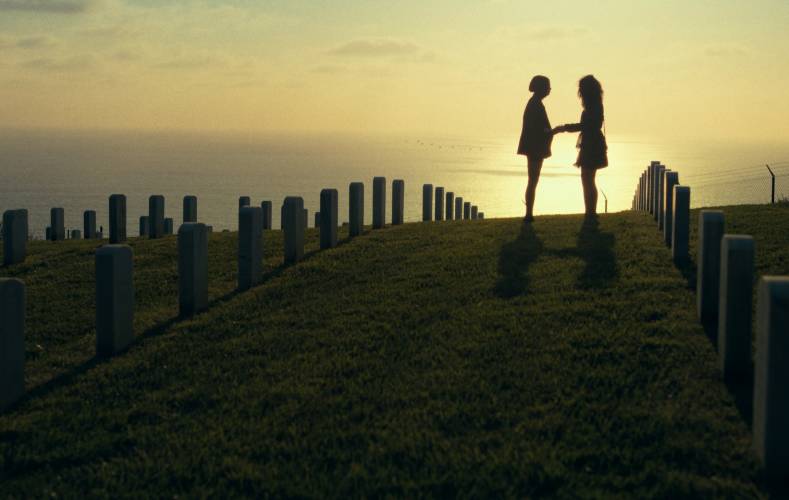 At first glance, Purple Hearts might look like a simpler story than it is. Based on Tess Wakefield’s novel of the same name, the film stars Sofia Carson and Nicholas Galitzine as a couple who begin a relationship of necessity and must then bridge divides of distance and, crucially, of political belief, as the bond between them grows. Directed by Elizabeth Allen Rosenbaum, Purple Hearts is available on Netflix and features photography by Matt Sakatani Roe.

Roe entered the film industry as an alternative to a much more conventional career. “I was on track to get a finance degree and realized that wasn't what I wanted to get into. I found myself driving sixty miles to go to community college, then on set doing random grip and electric work.” Moving to Los Angeles, Roe encountered well-known music video director Mark Pellington and a very unusual early opportunity. “Probably in 2009 or 2010 he asked me to shoot his daughter's fifth birthday party. The way I shot it was Lynch, Aronovsky... I put it together into a montage about a child and how they deal with a birthday party. As opposed to the joy I went for the drama. I showed his daughter was grabbing toys from other kids, things you'd never normally film. His family hated it, but he loved it and I started shooting music videos for him.”

Director Rosenbaum had encountered Roe on several previous projects. “We were in post on the film Sneakerella,” Roe recalls. “She told me about Purple Hearts, and it sounded like the perfect film we'd been talking about for a time – flawed characters who come together to create an existence based on a flawed situation.” Roe put together a pitch document for Purple Hearts and presented it to the director and Netflix executives. “I said it's a story of unfocused emotion, and mixed artificial lighting would reflect the mental state of the characters... then coming together to full spectrum at the end. I tried to subliminally plant the color red selectively in any scene related to the antagonists, playing up the red blood, whether it's the red pharmacy sign, a splash of red bouquet in the background.” 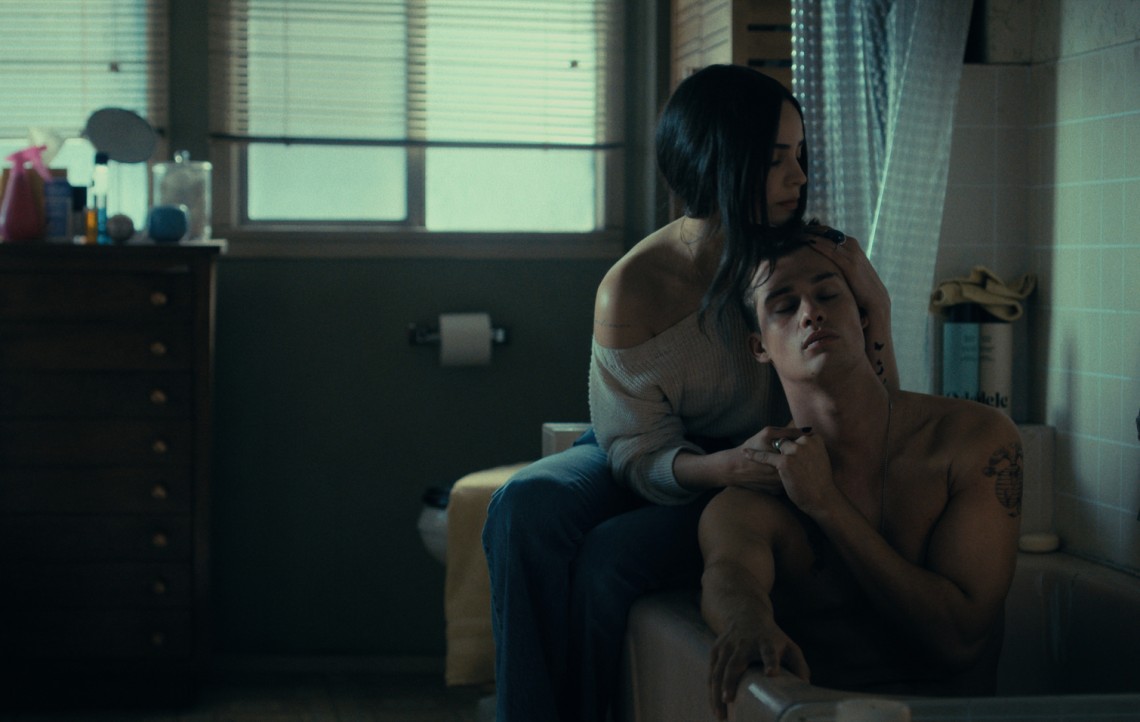 Purple Hearts shot from August to September 2021 in and around San Diego, a combination of place and time which made heat and sunlight a big factor. “We had to know when the sun was going to come, schedule our days so we were shooting the right scene we were going to at the right time of day. In the middle of the film I used sunlight and sometimes the characters had the shades closed. In the blue dawn before the sunlight, the blue spectrum of the middle of the film culminating in the warmth of the sunlight toward the end. I was excited about that concept.”

The production would be Roe’s first experience with the Sony Venice, which he combined with Cooke’s S7 lenses, mindful of a desire to get close to the action. “We carried a set of diopters for specific close focus tabletop inserts, but walking around filming the scenes the close focus is so spectacular. Once you've come to a specific close focus mark on those lenses, there's a shift in the character of the out-of-focus areas, outside the center spot of the images, where everything radiates into this beautiful, three dimensional quality. It’s three to five feet depending on the lens, where the face just projects this 3D shape and the backgrounds on the side of the image tend to recede.”

Using two cameras on most setups, Roe operated one himself, with Steadicam operator Dennis Noyes on the second, both placed close to the action. “If there's an argument, we wanted to feel like we were inside the argument,” Roe states. “That's a discussion I had with Liz. We wanted the choreography of the camera to reflect the conflict and emotion of the scene. The theme of being inside the conversations gave us that handheld approach. We wanted to be able to find the shots we needed to shoot; I never wanted to say ‘it's going to take too long to set up the dolly and get over there,’ I'd just pick up the camera and do it. We also wanted to ground ourselves in the wides. Any time we shot a wide establishing shot we were kind of locked off.” 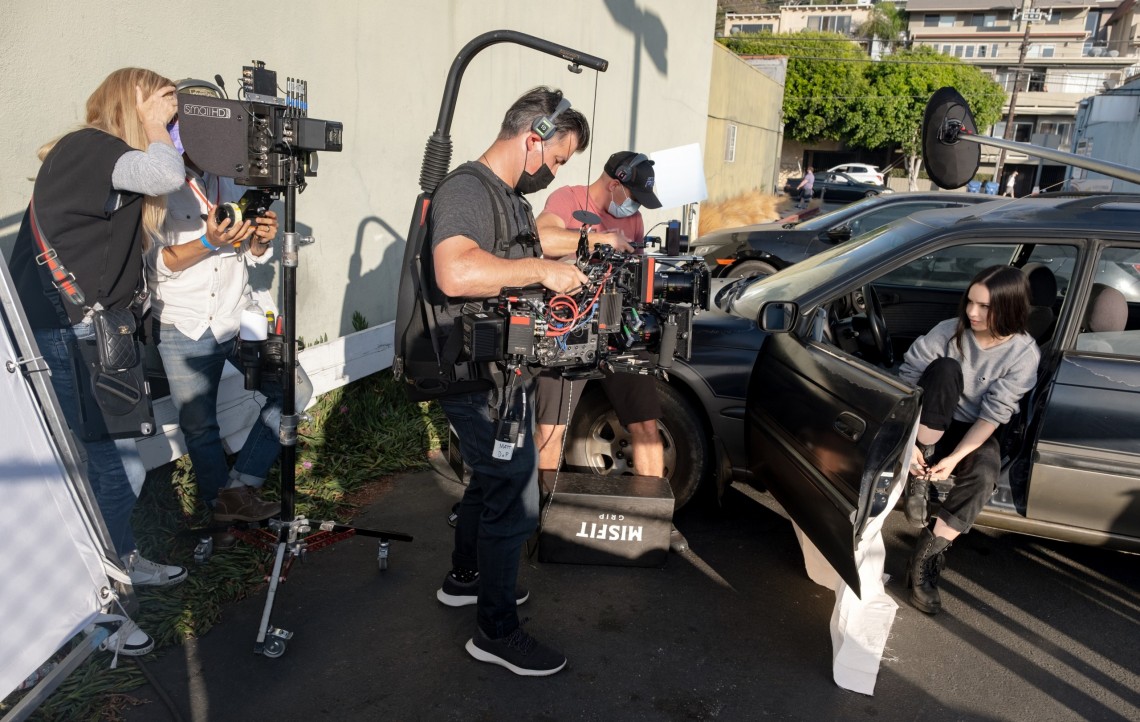 As so often, Roe found himself returning frequently to a particular lens – in this case, the 65mm Cooke S7, perhaps a slightly longer focal length than might be normal on a production shooting a smaller format and a choice made to accommodate the full sensor area of the Venice. “We considered it as kind of the eye for the two characters. We came up with that in our lens testing – there’s a scene on the couch later on which was the first time we went to the 135mm for the hero close-ups. I had the idea that if the camera operators could reach out and touch the actors, it was the right distance for the camera to be at.”

Operating the camera kept Roe on set, among the cast and crew. “I'm guilty of becoming a slave to the DIT tent,” he admits. “You sit in the dark and don't ever come out. It's a comfortable, warm, cosy cave of cinematographer bliss. The shows I've done like that I feel I'm separate from the actors, the director, the set and the production. On Purple Hearts, I forced myself to shoulder the camera the entire production, rather than being the DP who is the recluse.” Helping out in that regard were digital imaging technician Michael Borenstein and first assistant cameraman Brad Wilder, who, as Roe says, “put the camera next to me, and I'd just pick it up and use it as a window to the story. It is quite heavy – I'm quite glad they came out with the new one, but the dynamic range of the camera was great. It was a very practical show, all on location, and the latitude of being able to recover highlights in the windows was crucial.”

Preferring to light largely by eye, Roe found himself dependent on good monitoring. “My generation sort of missed the film heyday so I learned on the digital cameras. I tend to light by eye with contrast ratios, colors, everyone on set had some sort of a SmallHD monitor. I've been an extreme fan of SmallHD. They're bright, and they’re color accurate to a point. I did my testing, I knew what the camera could capture and record. I'd stand by the gaffer on set and we'd figure that it was in the right zone. Being an operator for this film, I don't think I ever really set the camera down, so I had to really trust what we were acquiring by eye. We had radio comms to the DIT and gaffer, so if I felt nervous about something I'd call them.”

Roe had worked in prep to establish a live grade configuration which would allow him to supply the rest of the production with well-finished, if naturally not quite final, dailies. “We did Resolve secondary-graded dailies on set. It was a massive amount of work. Our budget wasn't huge, we were doing a normal dailies process at a post production facility, but we wanted to have graded dailies for Liz, and production, and post. We were doing power windows and tracking them, secondary qualifiers in dailies. I think some people do, it's a very expensive process but we were able to do it on set and make those decisions throughout production. It helps the editor go in a direction rather than just having a 709 image.”

The production was finished at Company 3 under the supervision of colorist Bryan Smaller, who came at the recommendation of Jill Bogdanowicz. “Jill helped us design the show LUT,” Roe says. “She's a friend, she colored my first movie. She's been doing every massive movie for the last couple of years, she’s busy, and recommended Bryan who I did my first commercial with.”

With Netflix requiring an HDR grade, Roe approached the process with healthy caution. “I'd never been a fan of HDR grading prior to this production, but Brian came up with a way to contain the ceiling of HDR, and we used it selectively when we felt it served the story. We came up with a LUT that would contain the upper end of the whites in a 300-600 nit wrapper. The film looks natural, but if you pulled up the Rec. 709 vs our HDR grade, there's a lot of subtleties in the shifting of the black or grey levels. We called it a color twist, it feels colorful, if you squint at something I wanted to feel that it's reality but it's a specific microcosm of their reality.”

All of that work exists to serve a story, and Netflix’s own numbers make it clear that story has been a hit with viewers. As Roe puts it, “Liz did an amazing job, and the film was number one in every territory Netflix had because it painted America in that accurate perspective. Sometimes America wasn't comfortable seeing itself painted in that light. We tried to paint an accurate portrait of America. The characters are flawed by design. If you see America as an inside observer, you see these situations inside your family, these political beliefs and ideological perspectives. People are different, they're multicolored.”

Purple Hearts is available to watch on Netflix.