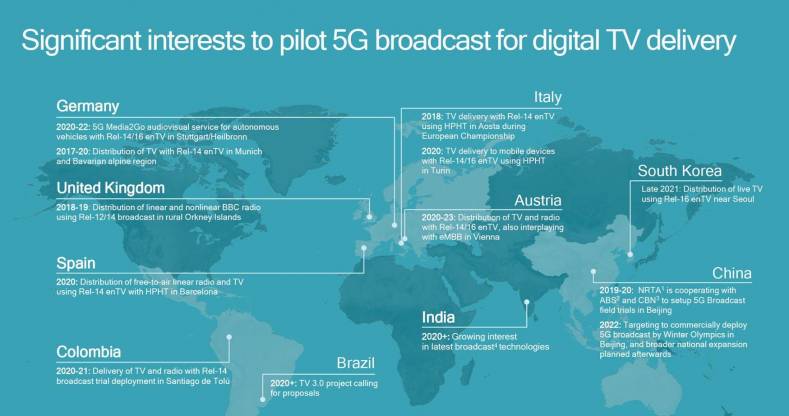 The emergence of 5G-NR or “5G Broadcast” is a concept that has been gaining momentum because it opens the prospect of video delivery to mass audiences and very low latency. Transmission is via new 5G wireless networks.

The promise of 5G Broadcast is that it allows broadcasters and content distributors to 'broadcast' linear television signals to mobile devices and living room TVs simultaneously, using a single chipset. Devices do not need a cellular sim to receive the content. Getting such reception chipsets into devices, however, continues to be a challenge around the world.

With 5G Broadcast it is possible to use the same media formats for media distribution (e.g. HLS, DASH) as for content delivery via the internet (OTT). This opens the way for seamless switching between distribution channels (e.g. 5G Broadcast and 5G Broadband) depending on Quality of Service and Quality of Experience parameters and results in the best media experience for customers at all times. In addition, the linear content distributed with 5G Broadcast can be personalized by additional content distributed via the internet and merged on users’ mobile devices.

The European Telecommunications Standards Institute (ETSI) is a standards body with more than 900 member organizations from over 60 countries and five continents. Most 5G Broadcast technology now in development is based on a standard developed by the ETSI 3rd Generation Partnership Project (3GPP), called the Further evolved Multimedia Broadcast Multicast Service (FeMBMS).

Their website says 3GPP enables the distribution of linear media content via large radio cells with a radius of up to 37 miles (60 kilometers). A single data stream is broadcast over the air using a high-power transmitter.

All mobile devices within the coverage area of the transmitter can receive the programs distributed via this data stream, as long as their device includes the required receiver chip. The chip enables the broadcast reception from HTHPs (high-tower high-power) with SDO (standalone downlink only) technology.

Since the signal is distributed only once to all receiving devices, there is no excessive network usage based on the number of receiving devices per cell and, therefore the quality of the content or service will not be reduced due to the demands of many devices.

A key feature of FeMBMS is that it allows reception of content on mobile devices without an internet connection. This “Free-To-Air” feature is important for broadcasters that want to reach their customers in the most efficient and comprehensive way possible.

This is a dedicated broadcast-only network (i.e., independent of cellular networks) that can address the emerging needs of broadcasters and content providers, giving them access to broader audiences via efficient content delivery to both fixed and mobile devices. It can meet all major 5G broadcast requirements defined in TR 38.913. It can be deployed in existing UHF spectrum (i.e., 470 to 698 MHz) that broadcasters already own or have access to, and its design allows the reuse of existing cellular modem building blocks.

A Mixed-Mode Multicast is a new 5G capability in mobile operator networks that can support dynamic switching between unicast and broadcast modes, which can improve system capacity and efficiency.

Both standalone broadcast and mixed-mode multicast will continue to evolve, further enhancing system performance and expanding into new use cases like IoT and public safety communication.

A 5G Broadcast signal was transmitted during the Eurovision Song Contest 2022 event in May. The “5G Broadcast trials,” saw the EBU and members SWR (Stuttgart), ORS Group (Vienna), France Télévisions (Paris) and RAI (Turin) support Eurovision services with content broadcast live and in high quality from sites in the four European cities simultaneously. Only a limited number of users with 5G Broadcast-enabled smartphones were able to see the transmissions, but the test showed high-quality, very low latency video (and audio) transmission to a mobile phone via an IP network works.

During the 2022 Eurovision Song Contest, the main signal was produced by RAI and delivered to the Eurovision Services headquarters in Geneva. An Ateme video encoder provided the signal to a CDN endpoint where ORS, SWR and France TV were able to retransmit the signal to portable devices.

On the broadcast side, Ateme supplied the encoding and streaming equipment, Rohde & Schwarz the transmitters, and Qualcomm a series of prototype 5G Broadcast-compatible phones.

France TV also teamed up with Orange and a collection of vendors to conduct broadcast and multicast trials to specially equipped receivers at the 2022 Roland-Garros tennis tournament.

Finally, Danish broadcasters DR and TV2 staged a 5G Broadcast of The Tour de France race in July, using a TMU9evo medium-power UHF transmitter from Rhode & Schwarz and mobile devices provided by Qualcomm. The transmitter was installed in Copenhagen and content was prepared by TV2 as part of its host broadcaster productions. Viewers watched the live, low latency broadcasts on mobile devices that did not need a SIM to receive it. This method, they say, helped eliminate network congestion and allowed broadcasters to retain their respective OTA transmission rights.

As society gets increasingly mobile, and more and more people want to use high-quality TV and radio free of charge on the move, 5G Broadcast will open new possibilities for TV broadcasters.

As 5G advances into the next decade, the needs of broadcasters, content providers, operators, and users alike will continue to evolve. Not only can 5G broadcast address most of those needs, but it is also a flexible platform that can expand into supporting new applications and delivering future experiences.

There’s little doubt that 5G Broadcast, with its fast and flexible cellular IP and “one-to-many” infrastructure, is clearly where “broadcasting” (delivering content with commercials to different platforms as efficiently as possible) is headed.