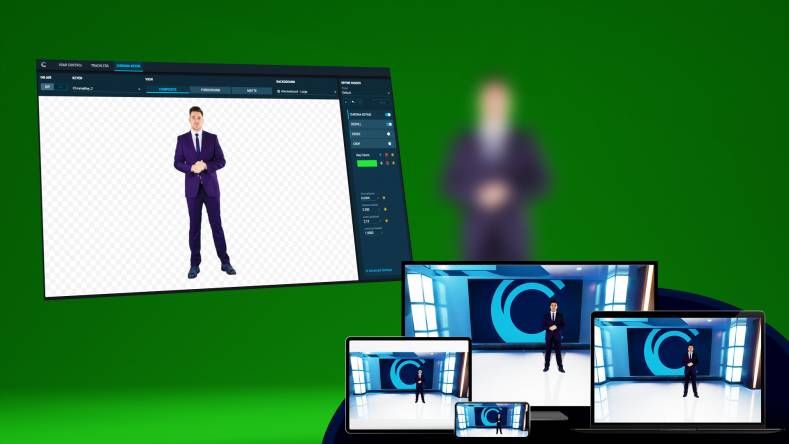 Like previous versions, this release builds upon PRIME VSAR’s easy-to-repurpose graphic assets, template-based workflows optimized for producers and journalists, and straightforward control interfaces for live virtual production. Highlights of the new release include the following:

Unreal Engine 4.27
PRIME VSAR 1.8 supports the latest and final release of the Unreal Engine 4 Series, ensuring access to all of the features and enhancements that Epic Games has implemented over the years. The 4.27 release includes valuable features for virtual production, such as optimizations to GPU Lightmass that allow users to bake in light sources and create photorealistically lit Unreal scenes faster and with less strain on hardware.

New Chroma Key Control Interface
Cleanly bringing green-screen talent into an Unreal virtual scene is a notoriously difficult task. Chyron has enhanced PRIME VSAR 1.8 with a new API layer that powers a new chroma keyer interface for blending green-screen talent with a virtual scene. From this straightforward chroma keying interface, users can set chroma key values, refine and fine-tune key passes, monitor all components of chroma key outputs, and easily save and load presets for different environments. Users can access the interface on local in-studio systems or as an HTML-5 interface from anywhere via web browser, which in turn supports running VSAR productions in the cloud.

Trackless Camera Control From the Newsroom
PRIME VSAR 1.8 brings the Mercury Trackless Camera control interface into the CAMIO MOS-integrated newsroom environment. Previously, CAMIO offered control over scene and graphic elements in PRIME VSAR. Now, from any newsroom computer system, whether local or online, producers can easily queue up all their virtual camera moves within a PRIME VSAR scene. With PRIME VSAR, producers can control the entire virtual production using the newsroom interface they are most comfortable with.

Other key enhancements include an upgrade from Matrox HAL 9.6 to Matrox 10.2, with the latest driver offering native support for NDI signal connectivity. Additionally, the solution’s new API layer implementation lays the groundwork for simplified and custom control interfaces in future PRIME VSAR releases that further de-skill virtual production. Built on the gRPC protocol, the same foundation used across the PRIME Platform and Chyron LIVE to power simplified interfaces, this new API layer implementation brings Chyron solutions closer to a common content-control interface across all aspects of live production.