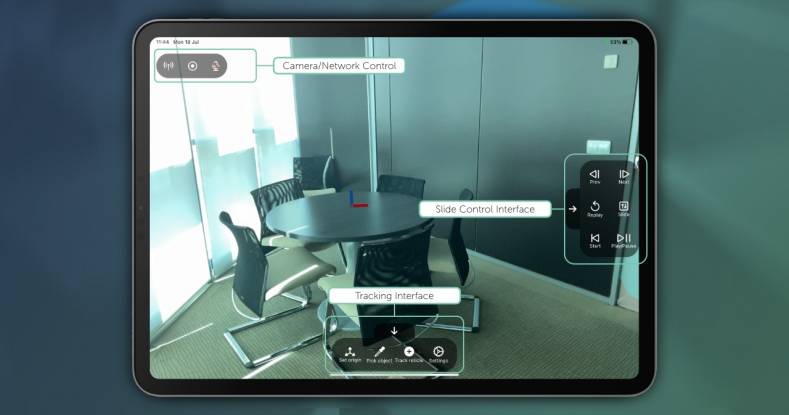 Conceived as a companion to Edison PRO, this captures video with tracking information and sends it to Brainstorm Edison PRO via NDI for creating immersive live presentations with in-context AR.

EdisonGO can capture a live scene and uses the LIDAR of an iPhone Pro or iPad Pro to add tracking to the video signal, so it can capture the information of the camera movement. The video and tracking information can be used by Edison PRO to include in-context AR content in real time, so any kind of slide, video, image or 3D objects can be seamlessly inserted in the scene.

Edison PRO can create immersive live presentations that include PowerPoint slides, live or recorded video feeds, images or 3D objects that can be included in 3D virtual sets, even created with Unreal Engine, as part of the scene. These presentations and objects can be also inserted in pre-recorded movies with tracking information. EdisonGO adds the capability of using a live, tracked video feed, coming from an iPhone Pro or iPad Pro and tracked with their LIDAR, as the background for the presentation, in real time, sending video and tracking information via NDI. This allows to capture a scene with a presenter in any place and add a real-time presentation as a live, in-context, augmented reality, which seamlessly follows the movements of the camera.

The tracking information can be also used to capture the presenter in a green screen and include him/her in Edison’s virtual environment, or to render a virtual scene to be included in an XR videowall, so the presenter can be shot in-context with a virtual presentation.

EdisonGO can also be used to control the presentation slides and objects, acting as a clicker to move the presentation forward, backwards or bring them forward to be displayed in full screen. It allows for enhanced PPT presentations, including virtual objects on scene, pointing to the camera.