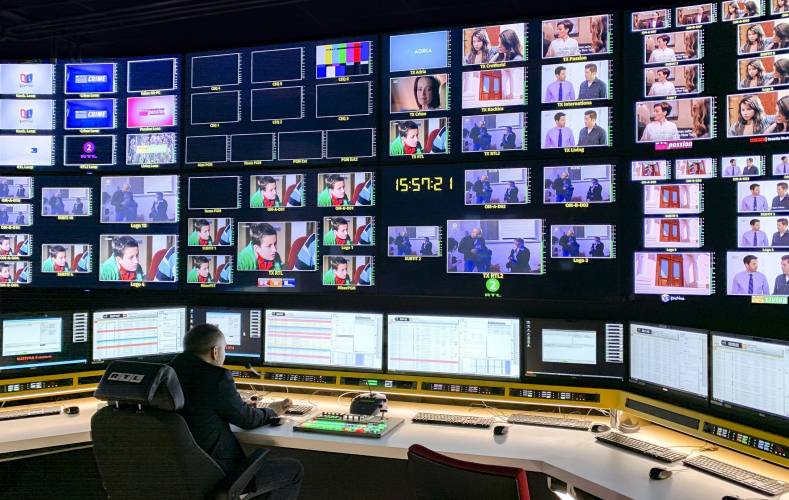 Broadcasters are the ultimate communicators. They transmit entertainment, news, sports and public safety information to their public audiences. What the audience doesn’t realize is how critical internal communications are to seamless TV production. TV is a magic show, and the director, crew and electronics control the smoke and mirrors.

For decades of TV history, station intercom systems improved incrementally but remained 2-way party line (PL) communications for the crew. Party line technology was the basis of all telephone systems for nearly a century.

Several major technology advancements changed broadcast intercom systems for the better over the past few decades. One was the development of the matrix intercom system with integrated audio hybrids allowing communications across multiple party lines without joining them together. Most modern control rooms use private matrix channels to selectively address different members of the production crew, such as a camera operator channel, or a prompter operator channel.

The second major innovation is wireless PL intercom stations, particularly those operating on the 5GHz band. Third was the introduction of digital intercoms, similar to private digital telephone systems. The fourth and most significant innovation is the audio-over-IP interface which allows intercom systems to work over wide area networks. Master Control Rooms (MCRs) are typically the central point of all communications between people and between devices. Last but not least, was the introduction of comfortable, active noise-cancelling headsets for crew members on the PL system.

A separate, one-way interruptible foldback (IFB) intercom allows the director to talk into the ear of talent who otherwise hears mix minus in their earpiece. Talent using earpieces connected to a matrix system can be individually addressed from a single microphone. Internal communications can be in the form of machine-to-machine and person-to-person. This article will focus on verbal communications and cues from the director to the crew and talent. Part 3 of this Master Control system architecture series will focus on machine control, Q/C, and compliance.

The most important function of any communications system is that those on both ends can send and receive instructions clearly. In wireless intercom systems, RF interference can be an issue, which is one reason for the popularity of 5GHz band intercoms. If people can’t understand and respond to verbal instructions, the failure to communicate can lead to bigger issues. Directors must direct and operators must immediately respond to their cues.

Today’s smaller crews and virtually unlimited remote production venues thanks to IP and cellular data have pushed the production intercom industry literally into new territory. The many benefits provided by the audio-over-IP interface have changed the way production crews connect and communicate. In addition to live TV broadcasting, similar intercom systems are used in live-sound, live-theater, theme parks, and event management.

Master Control hubs are replacing TV station MC switchers with a small router or a Channel in a Box (CiaB) solution that can be controlled remotely by the hub or controlled by a local operator. Some people prefer the CiaB approach because it supports crawls and squeeze backs without using the news production switcher. The router or CiaB controls the content fed to the STL and the transmitter. Communications between the hub and a local master control are important. The hub needs to know when the station is unexpectedly going local to cover a breaking news or weather story. Hubs monitor the local station’s output to its transmitter, and the hub operator needs a heads-up to avoid questions and possible panic. Thus, instant reliable communications systems between local stations and their hubs are crucial, as is short intercom latency.

Nearly every TV station is different, as are many group hub operations. Stations and groups tend to build what works best for their unique situations. Fortunately, TV news operations are usually self-sufficient, and relatively off the grid except for news tickers, weather, and school closing crawls. Many stations continue relying on their legacy intercom systems for local news, promo, and commercial production. The local master control is nearly out of the loop, except when inserting local content such as a live, last-minute, 30-second spot substitution during a newscast. Newscasts control the local studio production switcher, but nearly everything else is rolled and controlled by the hub’s automation system. Most newer EAS systems contain a web interface so they can be monitored and operated locally at the station and remotely at the hub.

The feature-filled master control switchers of yesteryear are no longer necessary at local stations connected to a hub. Many local stations have replaced their master control switchers with a 12x1 or 12x2 router that can be controlled locally or remotely from the hub. Typically, the router is used to switch the transmitter and STL input to either the studio, the hub, or perhaps a custom graphic prepared by the local news department with important information for viewers.

The Future of MCRs

Hub-based MC operations are clearly the trend in TV station groups, however many independently owned, smaller market local TV stations still operate local MCRs. Nearly all MCRs are fully automated, and most feed several channels simultaneously to the transmitter and local cable systems. ATSC 3.0 won’t change much of the workflow in hubs or local independent stations because one or the other is providing the video content. Many new features and aspects of ATSC 3.0 are internet-based and may not be associated with MC operations at all. Time will tell us as NextGen TV develops.

New NextGen TV services such as national data networks will probably be relatively invisible to MC operations and fully automated at the group level. The catch is that NextGen TV data services won’t take off until the country is fully covered by ATSC 3.0 stations.