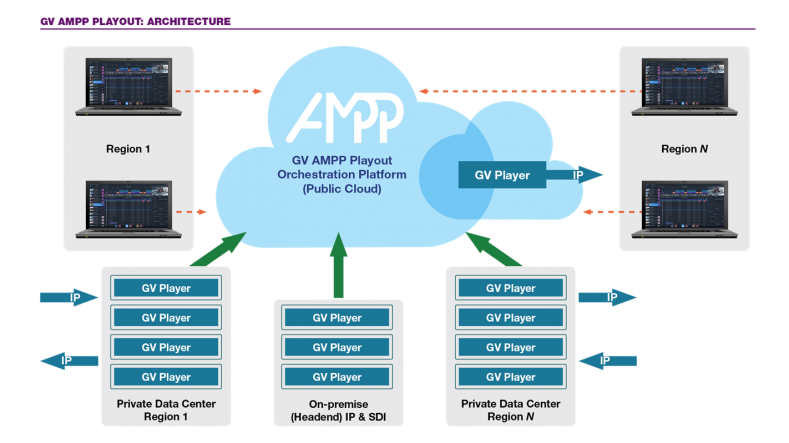 As head of NewTek and later its NDI subsidiary for decades until last year, Dr. Andrew Cross was a big advocate of making technology accessible and affordable to a wide range of people. It just made good business sense to create an ecosystem and then allow users to experience some of it for free and build up from there.

Now as CEO of Grass Valley, Cross is bringing that same semi-altruistic strategy with the announcement at its 2022 NAB press conference that the company will now provide the Playout application on its cloud-native GV Agile Media Processing Platform (AMPP) for free, making it within reach of many more media and entertainment companies than might otherwise be the case.

It's all part of the strategy to make AMPP the de facto operating system for media workflows and, if successful, could have a profound effect on the entire content delivery industry. The move also builds on Grass Valley’s GV Media Universe vision of providing a digital ecosystem that allows media companies to use both on-premise (allows media companies to use both on-premise solutions—like switchers, cameras, and asset management tools—and combine those with cloud technologies, or a hybrid of both, to build next-generation live production and distribution environments).

“Making AMPP Playout free is an exciting move and one that will change the media technology landscape,” said Cross. “Just like any operating system, there are some core capabilities that should be included because they are essential for most applications. We believe that Playout is one of these features and that it should not be a premium/chargeable feature." 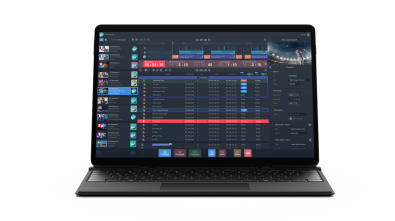 The agility of AMPP Playout gives customers the ability to trial new types of live content without prohibitive up-front investment and enables them to increase yield-per-asset.

At the press conference in  Las Vegas it was announced that the core AMPP Playout functionality will be available free to customers starting on June 1st. There is a charge for product support and advanced features like automated digital ad insertion.

The goal is to enable media companies—with their pop-up channels, feeds to social media, targeted advertising, and ad hoc requirements for major events in multiple languages—to deploy AMPP Playout both on-premise and in the cloud, as well as across a diverse range of topologies mapped to fit the customer’s changing requirements. Grass Valley said that the agility of AMPP Playout gives users the ability to trial new types of live content without prohibitive up-front investment and enables them to increase yield-per-asset.

Neil Maycock, CMO of Grass Valley, said that with AMPP Playout available for free, users can take advantage of a unified production ecosystem to create and distribute content onto any platform—including linear television, online, streaming, and social media—from anywhere in the world.

“This is increasingly important, as playout needs to be orders of magnitude more flexible than in the linear TV world of past decades,” he said.

Executives said the two companies will work together to innovate across new and existing products such as GV AMPP to provide media and entertainment customers with the technical infrastructure to transition their businesses to a more flexible, cloud-orientated future. AWS’ global infrastructure will enable customers to create, produce, and monitor their media supply chains where they want and at scale.

Cross said it is leveraging AWS’ infrastructure to meet the demand for scalable and elastic cloud-native production and distribution environments.

Leveraging Dr. Cross’ legacy as the father of the widely adopted NDI video-over-IP networking technology, Grass Valley also announced that its GV AMPP now supports it. With the adoption of NDI into AMPP, users benefit from a complete end-to-end integration for both on-prem and cloud workflows that cover the entire functionality required by a modern software-based media enterprise.

The company said that with native integration of NDI into the AMPP infrastructure, it is now possible to route an almost unlimited number of signals anywhere in the world. The integration also means AMPP now provides support for full graph-based signal flow manipulation, including provision for signal telemetry, routing, multi-viewers, and remote callers.

NDI into AMPP can be used natively with all AMPP applications, including the Live Producer, Master Control Switcher and the full K-Frame production system. Audio mixing replay and full ingest capabilities are fully integrated into a single platform. Users have complete management of NDI assets with a workflow solution for scheduling, voice-over, AI and even an integrated quick-cut editor.

AMPP with NDI also integrates into Adobe Premiere, with support for growing files, and Playout support of almost all media onto NDI streams is also provided. Also included is full integration with ST2110, SRT and SDI with end-to-end ancillary data and closed caption support. Having NDI integration into all major remote calling applications including, Zoom Rooms, Microsoft Skype and Microsoft Teams, allows media companies to have remote callers directly into any AMPP powered production.

“Building NDI into Grass Valley’s technology aligns with our vision to help our customers as they transition to the future of media and entertainment and embrace software, cloud and IP based workflows,” said Dr. Cross. “This integration further empowers media companies to adopt operating models that embody choice and streamlined workflows that deliver better efficiencies, giving them the agility to produce and deliver more compelling live content.

Finally, the company said it is working with Epic Games to bring its Unreal Engine, a real-time 3D creation tool for photorealistic visuals and immersive experiences, to GV AMPP, allowing customers to leverage the real-time rendering system natively with all Grass Valley video technology.

“My mission is to make sure that GV leads in the industry and hopefully bring others along with us so we can lift all boats and allow more people to be able to make more content— which will be great for everyone involved, including consumers watching TV at home as well.”