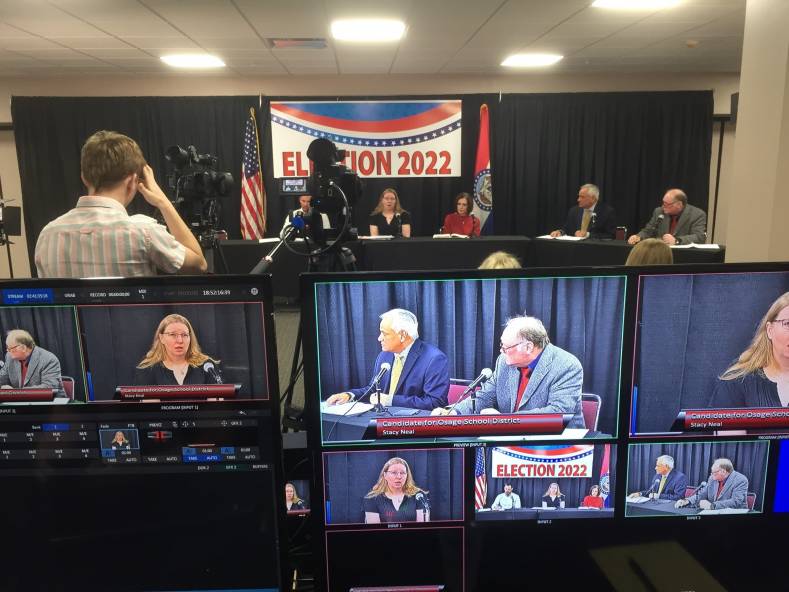 A vehicle speedometer is installed and calibrated to help make the driver’s speed compatible with the law and with other drivers on the same road. A video waveform monitor is analogous to a speedometer, measuring from top legal speed to parked, calibrated using SMPTE color bars. Exceeding the video speed limits can cause all kinds of distribution issues.

In analog TV days, every video engineer knew how to use a waveform monitor because user controls for video ‘shading’ of gain and pedestal (aka setup) were common on nearly every TV production device. I never understood why levels and chroma phase could change from source to source when everyone faithfully calibrated to color bars, but it was typical.

Digital video virtually eliminated many critical analog signal adjustments such as chroma and tint and many other settings became automatic, but it didn’t eliminate the need to use color bars for a reference. That’s why most recordings still begin with color bars. Of course, matching recorded color bars with the reference doesn’t guarantee that all content following the bars will be perfect. What happens afterwards depends on the attention to technical detail of the crew who captured and edited the original content.

I’ve met a surprising number of video production people who didn’t get the crucial role of expensive T&M gear such as waveform monitors and vectorscopes in video production. Yes, it’s expensive, and worth every penny. Some are intimidated by the mysterious buttons and switches and puzzling display. Many who don’t get it make brightness and contrast adjustments based on how the video looks on their local consumer video display. Actual “Reference Monitor” video displays are 5-figure expensive. Average 3-figure price consumer displays commonly lie. Expensive consumer displays that look particularly impressive sometimes lie more. Video displays are subjective. Successful video must be fully compliant to video standards.

Have you ever seen an audio mixing console without VU meters? Even the most celebrated, golden-eared, recording studio engineering legends rely on VU meters to objectively verify they don’t exceed defined level standards as they mix. Listening for distortion with studio reference speakers or headphones is subjective. The video counterpart to a VU meter is a waveform monitor.

All broadcast TV video (and audio) is processed and limited to comply with FCC regulations before reaching the transmitter input. Video luminance values exceeding industry standards and regulations is clipped, crushed, or compressed. Video that looks great on a local computer display can lose its luster when broadcast.

A basic waveform monitor presents a graphical representation of the timing or amplitude of a video signal. Its most common use is to monitor the amplitude of video content often using a built-in filter to remove the color and display only the luminance signal. The result is a virtual video Light Meter that is useful for setting lighting in a scene, and adjusting camera iris, signal gain, and pedestal to comply with standards. 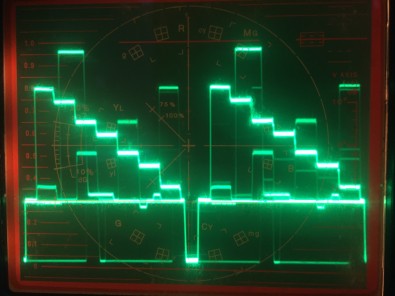 This standard color bar signal from a field camera needs a bit more gain as it is not using the full 1 volt peak-to-peak dynamic range.

Waveform monitors are used with isolated cameras to set iris and pedestal, and with production switchers to match the brightness and contrast of multiple cameras.

The top of the waveform display represents the brightest and the bottom the darkest. From left to right, the width of the waveform display represents the width of the image being monitored. This property makes it easy to find where in an image, from left to right, clipping, crushing or other electronic distortion is occurring in the scene being imaged.

A waveform monitor allows the camera operator or shader to identify the problem areas of an image being compressed, crushed, or clipped at both extremes of the luminance scale. It helps operators visualize the severity and observe how iris or pedestal adjustments affect the problem. Clearly, AI will increase in live camera shading. Instantly deciding what is important in a live TV picture and what is not requires more intelligence than the average auto iris. Often, determining what is least important is a judgement call.

In the US, judgement is what you see watching a pro football TV game on a sunny winter Sunday afternoon as the stadium shadow moves across the playing field. The contrast is more than a broadcast TV signal allows. When a play is in both the sun and the shadow, the director and camera shader must determine whether the sunny portion or the shade portion will get compressed.

The same is true capturing a scene in a room with a bright window in the shot. If what’s outside the window isn’t important, it is better to let it compress and lose the less important detail so the iris can be opened to show more detail in the darker areas of the shot. Captured detail lost in high brightness or dark areas can be difficult or impossible to recover in post.

The goal and purpose of luminance monitoring is to use the full dynamic range available in each shot as it is captured. Artistically, some shots may need to be darkened in post. In most isolated camera production, you’re better off to fill the on-site waveform monitor, from top to bottom, with maximum dynamic range in every shot. Adjust the brightness and darkness of each shot to taste in post and use a waveform monitor to verify you’re inside the limits.

It’s all about luminance amplitude. The amplitude of an analog baseband video luminance signal is exactly one volt, peak-to-peak, including the sync signal. Digital video signals and streams have similarly critical standards, usually defined by formats, bits, bytes, and bandwidth. The one property all video signals from analog SD to 8K share is luminance limits. Luminance is format agnostic. It isn’t affected by progressive or interlaced frame rates, or the number of pixels/frame.

Video luminance is simply a finite dynamic range between absolute black and the brightest white TV stations are allowed to broadcast. In HD formats 0-100 IRE units are often considered a percentage of luminance. Absolute black is zero and the brightest compliant white is 100. The area above 100 IRE (12.5%) to 120 IRE (0%) is reserved for analog chrominance information. The 7.5 IRE pedestal setup marker is also an analog SD reference.

The shades between 0-100% are the ‘legal’ electronic territory that video technicians, producers and TV stations are obligated to work within. Analog shades were theoretically infinite. The number of DTV shades is determined by bit depth. Eight-bit video has 255 shades. Ten bits delivers 1024 shades.

Using an analog SD waveform monitor to display digital signals requires a SDI/HDMI to analog scaler that typically sells from about $150. It’s an entry-level approach to discovering what a uniquely powerful production tool luminance waveform monitoring can be.

The secret to producing the best possible video is to know the most important element in each shot. A waveform monitor is helpful for making lighting corrections and using all the dynamic range available to capture the best images and detail of the important element. The rest of the artistic magic is better performed in post.