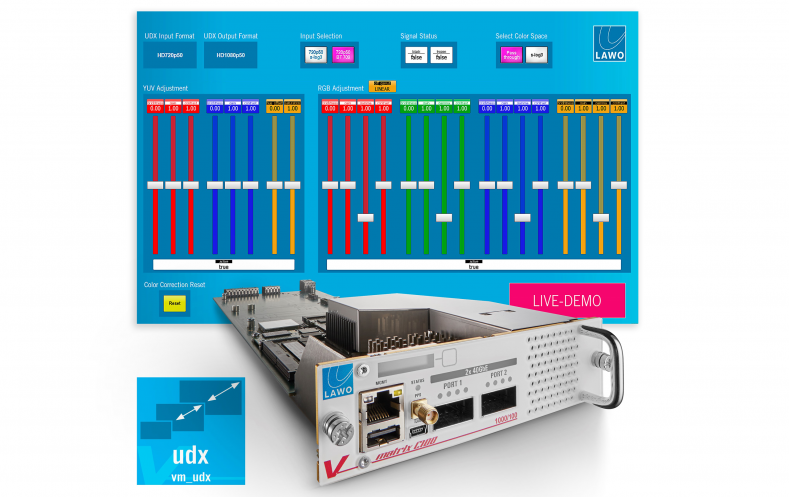 Lawo’s V__matrix platform does such an appreciated job at enabling a wide range of video and audio workflows and supporting the transition to a fully IP-based environment that Lawo celebrates its fifth anniversary with a constant flow of significant software-based enhancements.

In the light of a rapidly growing trend towards remote maintenance, vm_udx’s web UI allows operators to monitor which video content is currently processed by a given C100 blade. The new Live Video Preview display allows users to visualize the video content received by an SDI or IP input, or the output of a processing stage, directly in vm_udx’s web UI.

In response to vm_udx user requests, Lawo has enhanced the +hdr color space 3D LUT conversion engine. Each of the four vm_udx paths now features top-notch tetrahedral interpolation for conversions between a variety of color spaces.

To support flexible audio workflows, vm_udx adds a range of new features. A newly designed downmix engine with 2048 mono-equivalent inputs into 256 mono-equivalent summing busses can be freely configured for flexible mono or stereo summing as well as dedicated 5.1 > stereo or 7.1 > stereo downmixing.

The digital gain range for all audio leveling instances has been extended to support level adjustments between –∞ and +24dB. In addition, vm_udx is able to interface with a MADI environment simply by adding the optional +madi license and communicating with the SDI rear plate connected to the processing blade that hosts the Up/Down/Cross Converter. BNC connectors can be software-switched to MADI in almost any combination.

The new vm_udx release furthermore supports metadata workflows with an advanced ancillary-data handling engine. Able to handle ANC data in 2110-40, 2022-6 and SDI signals simultaneously during the conversion process, users are free to keep, or remove, individual DID/SDID contained in the ANC payload.

The new +tc_gen license generates timecode flavors from PTP or other time sources and provides up to three independent generators. Generated ancillary timecode (ATC) formats, which can be embedded into TX and SDI outputs, include VITC1, VITC2, and LTC. Linear timecode (LTC) can be generated as a digital audio signal.