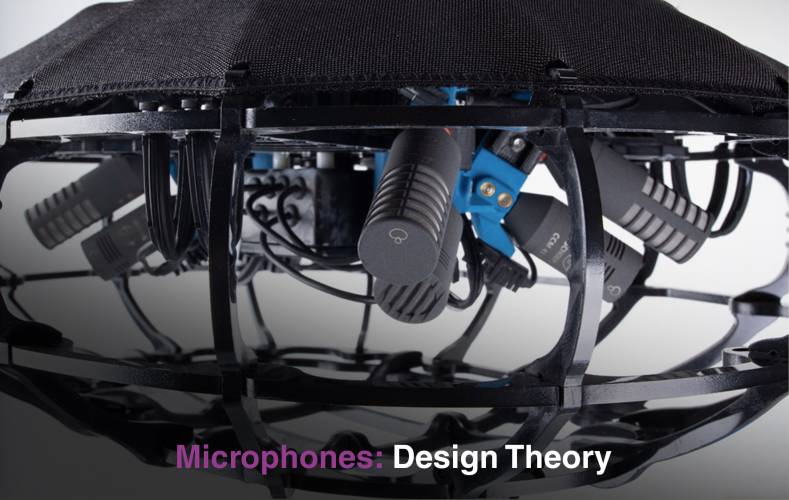 The State Of The Art

The great thing about today's microphone technology is that it is really rather good. What is particularly interesting is that most of today's microphones remain analog, yet have reached performance levels that in many cases are beyond what is actually necessary. How did they do that with "old fashioned" analog technology?

Digital technology solved a lot of problems in audio equipment, starting around the 1980s. Recording media of the day simply weren't good enough and digital recording along with error correction fixed that once and for all. Microphones did not have that problem.

Digital audio also made possible techniques such as compression, which reduced the bandwidth needed to transmit audio. Similarly, analog transmission over distance suffered noise and interference and digital transmission fixed that. Again microphones did not have those problems. 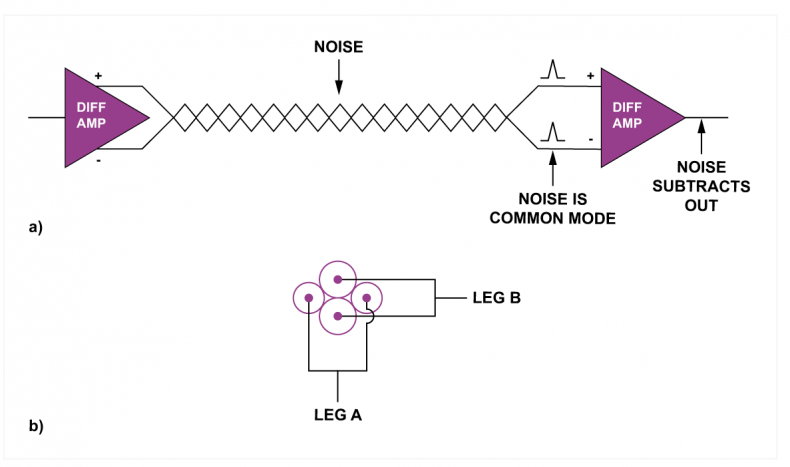 Fig.1a) The twisted pair picks up interference as a common mode signal that the differential receiver cancels out. Fig.1b) Star quad cable makes the interference pick up on each leg more identical.

The use of phantom power enabled a low impedance signal to be sent from the microphone over a balanced screened cable that worked very well. Fig. 1a) shows a twisted pair carrying a balanced audio signal. Any interference picked up by the cable will be in common mode and can therefore be rejected by the differential receiver. Even higher interference rejection is possible using star-quad cable in which each leg of the balanced signal consists of a pair of conductors that are equidistant from a common center point. This mechanical arrangement makes any interference picked up almost totally common mode. 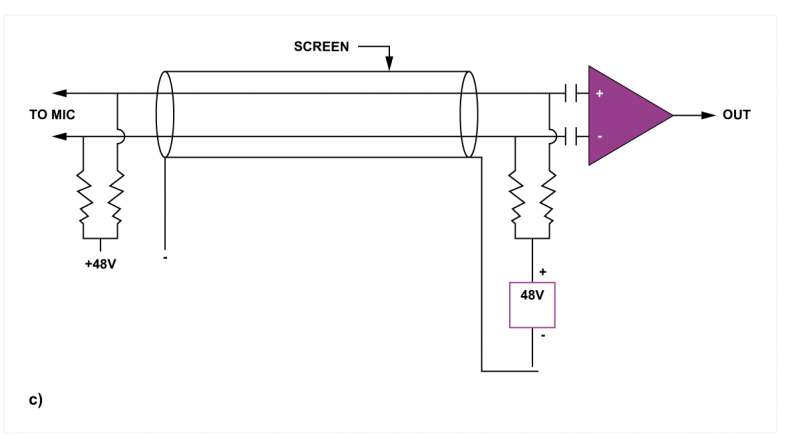 Digital microphones have been made, in which the microphone body contains an ADC and the audio signal leaving the microphone conforms to some digital standard. Whilst they worked, they did not deliver any significant advantage over the traditional analog microphone, because they solved a problem that didn't exist.

If we look at the complete audio chain, we find two weak links. The best microphone in the world will be brought to its knees if it is put in the wrong place. The finest audio signals in the world are at the mercy of the traditional loudspeaker. As for the loudspeakers found in cell phones and tablets, conventional technical terms seem somehow inadequate to capture the sheer squalidity of the sound.

Microphones are also good at taking blame. How often does one hear complaints that a recording would have been better if only some better microphone had been available? The best microphone in the world is the one you have got, and if that's what you have got, the best approach is to keep it in its comfort zone.

Put simply, the analog microphone isn't the weakest link. It's not broken and it doesn't need fixing. From the standpoint of the professional microphone user, about the only thing that could improve a microphone is a reduction in cost. The professional market is not very large, so economies of scale are not very great. Instead we see microphones being assembled where skilled labor is inexpensive.

The present solution to that is MEMS technology, which stands for micro electro-mechanical systems. Instead of assembling a microphone capsule from various parts, the capsule is fabricated using a relative of the photolithography used in making integrated circuits. This means that the microphone can be very small and needs no skilled hand assembly.

Two things follow from the small size of a MEMS microphone. Firstly the microphone will be omnidirectional. Secondly the noise floor will be extremely high by professional audio standards. The microphone itself is still analog and usually works as a variable capacitance. Being so small the capacitance is tiny and the input impedance of the associated amplifier is very high, hence the noise.

This is just an example of scale effect, where making something bigger or smaller changes its characteristics. For example, weight goes as the cube of size, whereas surface area goes as the square, so small objects have relatively high surface areas in relation to their weight. An elephant doesn't eat much for its size and uses it ears to keep cool. A bird has to eat continuously and uses its feathers to keep warm. 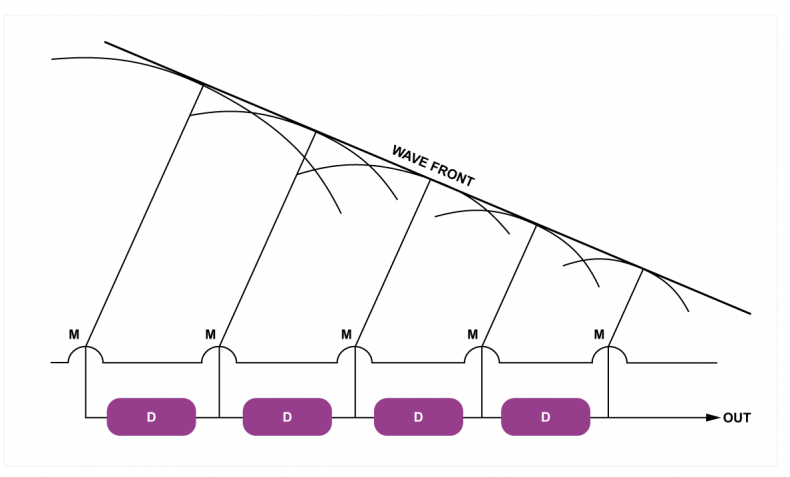 Fig.2 In a phased array, a series of delays allows a wavefront to be transmitted or received in a chosen direction.

The microphone capsule itself may be analog, but a lot of MEMS microphones contain an integral ADC so the audio output is digital. This may give a noise advantage when the microphone is mounted inside an iPhone or a computer, which exposes the audio signal to an electromagnetic soup of interference.

The MEMS microphone cannot replace the traditional professional microphone, but it does allow some alternatives to be made. The sheer low cost of the MEMS microphone means that it can be used to build microphone arrays, which have some interesting characteristics and may allow devices that cannot be implemented in any other way.

Radar sets used to have rotating directional antennas so the narrow beam could be swept around and determine the direction from which reflections came. More modern radars use static antennas, which are actually antenna arrays built of from smaller elements. Fig.2 shows how an array can be steered by using delays between the elements. Instead of physical rotation, the delays are changed to rotate the beam.

The same trick can be used to make a directional microphone. If the microphones all have digital outputs, arranging and controlling the delays is trivial. The fact that the individual microphones are omnidirectional doesn't matter, because the directivity is determined by the subsequent signal processing.

A large array could be far more directional than a traditional microphone if required. As the directivity is determined after the array, a stereo or surround sound microphone can use the same array but with different beam forming for each channel.

A sound arriving at an array would reach different microphones at different times, but if the delays were correctly set, the sounds leaving the delays would be coherent. This means that the sound signals would add, increasing the level by 6dB. However, the noise from the microphones is incoherent, so the power would add, increasing the level by only 3dB. There is a net gain in signal to noise ratio of 3dB. With a suitably large array, it would be possible to get the signal to noise ratio up to professional standards.

The real power of microphone arrays, combined with digital processing, is that some of the features of the human auditory system could be implemented.

A scanning phased array could produce an acoustic map showing the dominant sources of sound arriving. By looking at the timing, the array could determine which are direct sounds and which are reflections. In other words a microphone array with sufficient processing power could simulate the Haas effect and use reflections to enhance the direct sound rather than spoiling it.

In a camcorder, such a microphone could be assisted by picture analysis that would help identify the dominant sounds sources.

Such a microphone may be attractive to the consumer because it would hear in the same way that a human does and would offer better sound quality in uncontrolled acoustics. The processing required would be fantastically complicated, and it remains to be seen whether it could be made economically.

Until something based on large microphone arrays emerges, we are stuck with the current state of the art in microphones. I don't anticipate any dramatic developments, nor indeed are any really necessary. About the only technical way in which microphones could improve is in maintaining the same directivity function over a wider range of frequencies. Other than that, there is not a lot wrong. There is little danger of a good microphone becoming obsolete. It will still be a good microphone in ten years time and as such represents a great bargain.