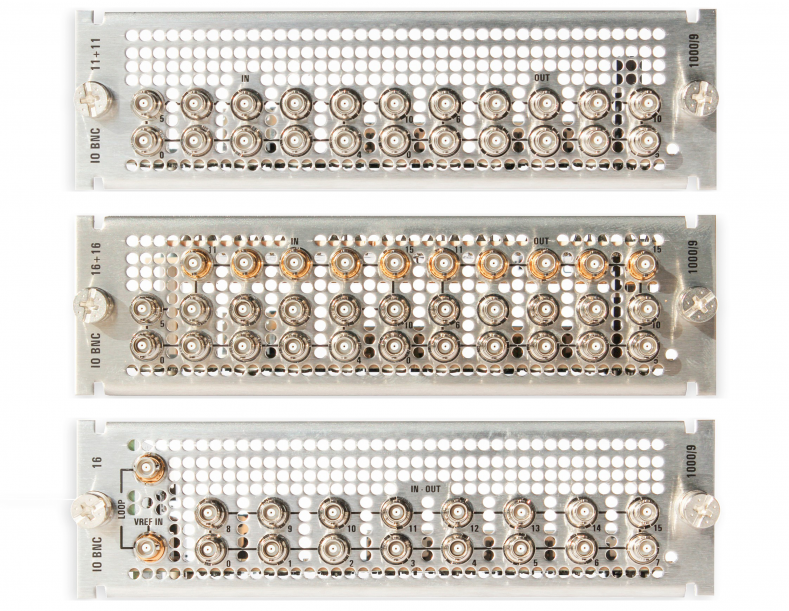 For over five years, Lawo’s V__matrix IP-broadcast core infrastructure ecosystem has allowed users to transform their installations into a flexible, future-proof production and/or delivery facility. Its C100 processing blades accommodate a wide range of software-defined video and audio workflows and also facilitate the transition to a fully IP-based environment with best-of-breed gateway functionality.

To fully leverage the processing capacity of its V__matrix C100 blades and to allow users to derive more power from a smaller footprint, Lawo announces the release of three new rear plates for the connection of SDI baseband equipment to an open-standards-based IP network.

io_bnc_16+16
This new fixed-format rear plate features 32 micro-BNC connectors (16 inputs and 16 outputs), with the ability to interface 12G single-link SDI signals and destinations on 11 inputs and as many outputs. The five remaining I/Os remain available for 3G SDI signals.

The 16+16 expands the connection density of previously released io_bnc plates by up to 60%, allowing users to keep their IP infrastructure even more compact.

io_bnc_11+11
The io_bnc_11+11 is Lawo’s first rear plate whose 11 inputs and 11 outputs are all 12G single-link capable, yielding up to 10% more overall connection density per C100 processing blade than previously available models.

Like on all existing members of Lawo’s io_bnc family of rear plates, the micro-BNC connectors are primarily intended to receive and transmit SDI signals. They can, however, be software-configured for MADI data transfer.

The new the io_bnc_16+16, 11+11, and 16_BiDi rear plates are already available for both new and existing installs in tech rooms, private-cloud hubs and OB trucks. And they are just one way of keeping the V__matrix ecosystem current for many years to come. More features will be announced soon.