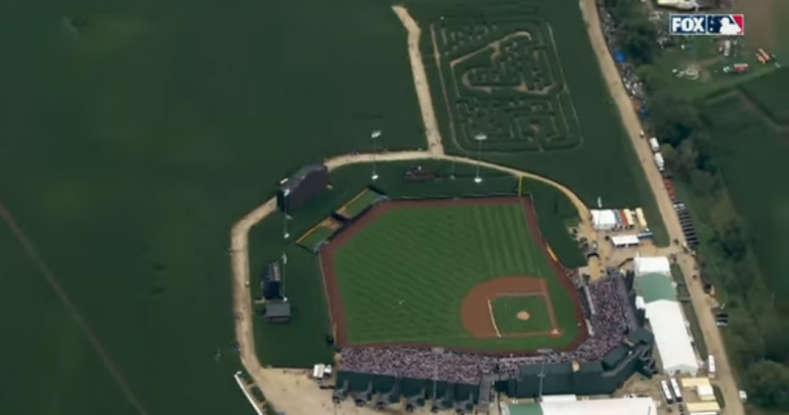 Aerial drones were used for the first time by MLB to provide overhead shots of the field throughout the live telecast.

Though mostly a publicity stunt, Major League Baseball’s Field of Dreams Game live telecast on August 12th proved to be a hit for everyone involved—including the Fox Sports team and production company Game Creek Video—tasked with putting it on.

Set at a specially constructed ball field in Dysersville, Iowa to replicate the movie “Field Of Dreams,” the New York Yankees and the Chicago White Sox slugged it out in front of 8,000 fans (including players, coaches, actors and other celebrities).

Like the famous film it takes after, there were corn fields everywhere you looked. Iowa-based Musco Lighting provided a large LED screen that spotlighted much of the 159 acres of corn that surround the ballpark. In addition, a manual scoreboard was installed in a corn maze located just behind the right field fence.

The new venue was located near the one built as part of the set for the 1989 movie starring Kevin Costner. It’s designed to resemble Comiskey Park, the White Sox’s home from 1910 through 1990, right down to the 400 ft. from home plate to the 12-ft.-high padded centerfield wall.

The ballplayers wore period uniforms and entered the stadium from a cornfield at the edge of center-right field—evoking the way the characters eerily appeared in “Shoeless Joe,” the 1982 novel that served as inspiration for the film.

Paying homage to the original movie, players wore period uniforms and entered the stadium from a cornfield at the edge of center-right field.

The game was originally scheduled for 2020, with the White Sox playing the St. Louis Cardinals, but was delayed a year because of COVID-19.

The telecast took advantage of production elements befitting a postseason game, including 39 Sony 4K HDR/SDR cameras (all native 1080p HDR); over 50 microphones (with multiple mics buried in the field and one on each base); multiple aerial production drones (provided by Beverly Hills Aerials)—the first time Fox Sports has used drones as part of an MLB game—a FlyCam overhead cable system, and four Super SloMo cameras (Sony HDC-4300s with up to 8x High Frame Rate capability). The game was also made available on streaming services in upconverted 4K/HDR.

“We really believe the drones are a storytelling element that really matches the cinematic capture that’s done in movies,” said Brad Cheney, Fox Sports’ vice president of operations and engineering, in an interview with The Des Moines Register. “Where you might have 10 or 15 different shots to create a long movement or something of that nature happening, we can create a single shot with a drone.”

This included low over-the-corn shots running 2,000 to 3,000 feet that helped draw viewers into the night’s historic theme. Also, the Fox audio team was careful to hide all microphones and other “new” technology to support the intended ambiance.

A full complement of 39 Sony 4K cameras were on hand to capture the action.

A pair of parabolic mics were installed into the backstop to pick up bat cracks, lavalier mics were buried near the pitcher’s mound, and a few more were placed atop the centerfield wall. During the telecast audio technicians held up parabolic mics along the baselines to pick up plays at first and third base.

The singing of the national anthem was performed inside the movie-set stadium, which is about 500 yards away and has been operated as a tourist attraction since the movie was filmed there 32 years ago. The sound was piped in wirelessly and played through a temporary PA system set up in the new stadium by Van Wagner, which also erected an LED video screen in left field.

As another innovation, Fox Sports deployed its Megalodon system (coined by technical director Jarrod Ligrani), made up of a Sony a7R IV mirrorless digital camera with a Canon lens that debuted last NFL season and produces a “cinematic look” now coveted during live sports broadcasts for its shallow depth of field.

A Sennheiser short-shotgun mic was attached to it, adding another audio element to the game’s 5.1 mix.

Matt Gangl, Fox Sports senior director, said that most major league ballparks have the necessary infrastructure connectivity for the cameras and other equipment to produce a live game.

“You go to a Major League Baseball facility, you've got infrastructure — things that are already in place to be able to put out cameras and all that,” said Gangl. “Here, everything is going to be run from the truck. If we're doing a camera over at the movie set, well, that's a couple thousand feet away from where our truck is going to be. So that’s a couple thousand feet of cable. It's a unique challenge, and that's a credit to our technical staff and our operations team for coming up with a plan to make this happen.”

He also said that after watching the movie countless times as preparation, he “borrowed” several camera angles and iconic scenes from the movie that he incorporated into the “Field of Dreams” telecast. The on-screen results told the story the way it was meant to be told, in the eyes of a farmer who builds a baseball field in his cornfield that attracts the ghosts of baseball legends.

The Yankees lost the historic game to White Sox 9-8.