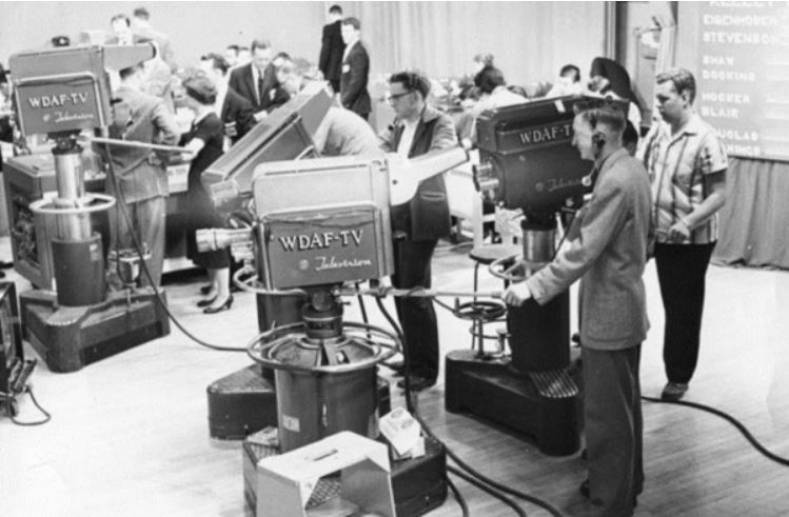 The year after AT&T established its first TV link between New York and Philadelphia, US monochrome TV standards were agreed on in 1941. As US troops returned home from the war, AT&T was establishing a larger TV network and local TV began spreading to markets across the country. Many TV engineering pioneers were war veterans trained in electronics by the military and seeking an electronics career when early TV stations originally signed-on. Nearly everyone working in the new TV business was a pioneer because stations did things never done before.

After obtaining a TV broadcast license and call letters, the only TV-specific rules were technical standards and community standards regulated by the FCC. The first TV stations were essentially radio stations with cameras, often built by local radio station owners, and TV operations were based on the radio station’s routines and procedures. Local TV’s ubiquitous news-weather-sports format was born and raised on local radio.

The radio station connection also influenced many TV station’s internal numbering systems for commercials, PSAs and promos. Local station spot numbering systems and local news formats are some of the few station traditions that have remained largely unchanged by time and progress.

At the local level, it wasn’t long before new station-specific TV procedures and guidelines were invented, adjusted and reinvented as people got better ideas of how to create and produce TV. Some stagehands and directors came with experience in live stage production, but live TV was a new world, and each station was unique. When the first live local TV newscasts aired, they were essentially radio newscasts on camera, because film stock and film developing was slow and expensive.

TV engineers invented the luminance key for text graphics and titles. The first keyed TV graphics were white letters pressed on black cardboard making them easy to key. TV news staffs and crews regularly broke new ground and invented virtually every new method and procedure to technically produce everything seen and heard by news viewers. The best new ideas often were adopted by other stations. TV stations were flattered when its ideas were copied, and often used being ‘first’ for promotional bragging-rights. 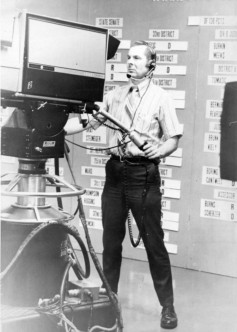 State-of-the-art 1968 primary election results graphics on WDAF-TV were posted on a flat behind the cameras. The first electronic character generator debuted later that year during US Presidential election network coverage, developed by CBS Labs.

I began my TV career as a 19 year-old vacation relief engineer at NBC affiliate WDAF-TV in 1967. The station signed on the year I was born, and I watched it growing up. When I was hired, most station employees were about 40 years old. Nearly all started in their 20s when the station signed on. In 1967, the station began its conversion to all-color. To the first-generation local TV engineering pioneers and me, the new vacation relief kid, color TV was a new electronics playground.

As part of the second-generation of TV broadcast engineers, I was lucky enough to be trained by the original risk-takers and trailblazers who invented much of what they taught me. I was at the station when it integrated its first digital broadcast device in 1971, a CBS Labs Vidifont Mark-1 character generator.

The Mark-1 had one sans-serif font, a background color generator, and every spot tag we used it for on air looked the same. New industry competition, faster technology and software options quickly made the visually boring, but time and money-saving Mark-1 obsolete.

About the time ‘Smokey and the Bandit’ debuted in 1977, digital technology reached its first milestone. It was the capacity to produce memory chips capable of processing and storing a full TV frame (two interlaced fields) in real time, and it marked the beginning of the end of analog video and TV. As magnetic, optical and solid-state storage capabilities grew exponentially and processors got smaller and faster, costs dropped precipitously.

‘Smokey and the Bandit’ remains popular 44 years later, but digital technology has fundamentally changed how we might watch it today and how all new content is stored, produced and seen. More digital TV changes and opportunities are emerging, such as NextGen TV. The endless march of new technologies keeps TV broadcasting in the pioneering mode. The human element never changes and engineers are always curious. TV has always been a fountain of new technologies, trends, challenges and opportunities begging for innovative thinking, experimentation, and creative application.

Broadcasting and change are synonymous. What hasn’t changed in broadcasting is the need for exceptional talent and dedication behind the scenes. The latest generation of TV engineers faces more technical changes, challenges, and opportunities than any TV engineers before them.

Radio stations have staffs because one person can do a live show solo. TV stations and production companies have crews because it takes more than one person to make a live TV show. Successful TV station engineering veterans know where their knowledge and skills fit in to the work and content flow and how much TV stations depend on everyone and everything to be ready on time.

In the early 1950s, playwright, director, and actor Noel Coward coined the phrase “The show must go on,” meaning actors and crews have a moral obligation to give the show their “all.” His maxim is as valid today as it was then. People that want to be around the glamour of television but don’t get it don’t last. Every TV station department deals with unique, beat-the-clock challenges every day that often can’t be accomplished by just one person. Engineering excellence is the result of all engineers and operators critically monitoring and correcting technical anomalies before anything abnormal becomes obvious.

The finest broadcast TV engineers I’ve worked with were appreciated by everyone at the station because they all shared the following qualities: