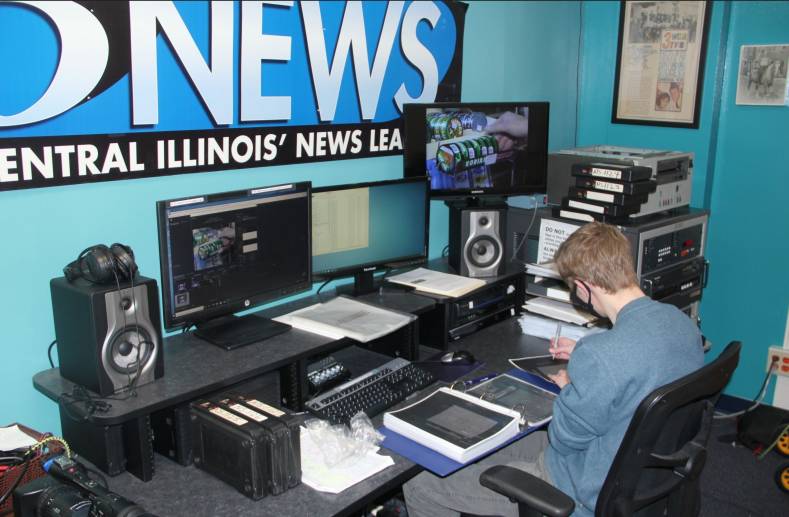 The Vault transfer station uses VCRs retrieved from retirement in the station attic.

WCIA in Champaign IL has been on the air since the mid-1950’s. Unlike many other TV stations, the former owners (Midwest TV) and current owner Nexstar did not toss the station's collection of old historic photos, film and videotape. Over the years, WCIA's collection accumulated both on site and off.

When WCIA Production Manager Pete Barrett joined the station in 2015, 4,000 hour-long videotapes sat in dusty boxes in the station’s basement. Today, he is leading the effort of maintaining and building the WCIA archive called “The Vault.” He and his crew have created methods using new digital technology to convert film stock and videotape to digital images. That product is used in the production of news, online features and a weekly TV program called “From The Vault” which broadcasts segments of WCIA’s past. The Broadcast Bridge recently asked Barrett how he and his crew are making The Vault possible, and what has been learned.

When and how did “The Vault” get started?

“Matt Metcalf, one of the co-hosts of WCIA’s local lifestyle show, ‘CI Living’ was getting his Master’s degree in Library Sciences at the University of Illinois. Matt and I are TV history buffs and realized we were sitting on a goldmine, just uncategorized, very difficult to retrieve, and analog. Matt was a reporter / anchor for years at WCIA, so he had some reporter chops to go with his Library Sciences credentials. We realized it would be possible to leverage this content into a feature on our station, at first as a segment on our local news and then, after we got more material digitized, as a 30-minute show. We now have 22 shows done and three more in production.” 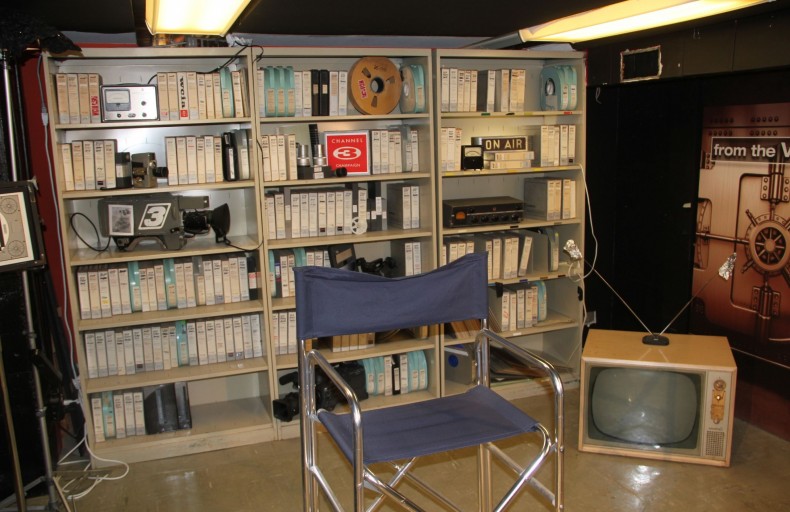 One corner of the station’s basement was turned into the set for the “from The Vault” show.

What formats of film and videotape are you converting?

Barrett and crew are converting 16mm film (silent and optical tracks); ¾-inch tape (1600 hour-long tapes); BetaSP (2,000+) and DVCPRO tapes. Barrett said “The station still had in our attic all the analog gear we needed to put it in a rack and port the output of the rack into Adobe Premier Pro. Fortunately, we still had one engineer, Peter McFarland, who had worked on these tape decks and was invaluable in keeping the gear running. Our machines are a Sony VP 5000, a Sony BVW 70 BetaSP, a Panasonic AJ-D455 DVCPRO, a VHS, and a DVD player. Chief Engineer Darren Martin was also instrumental in getting us up and running.”

What do you do when you don’t have a machine for playback, such as 1-inch or 2-inch?

“Fortunately, our predecessors at WCIA had transferred all the 2-inch to DVCPRO. Most of the 1-inch has also been transferred, but there are still 50 or so 1-inch reels remaining. We have a broken RCA TH-200A that we’re trying to repair for those.”

“We keep track of the many news stories on video primarily via story slugs and dates the stories ran. The process to retrieve stories depends on the cataloguing system in place at the time. For example, searches for stories between 1975-1988 (all ¾-inch) starts with the date. We have captured and stored all the tape labels from these tapes in chronological order. We will look at the PDF’s (or ring binders) for the tape labels from the corresponding years and search for the appropriate date, then for the slugs that look appropriate. From there, we scan through the digital copy of the tape itself to locate the story. We do have paper copies of the rundowns (not the scripts) from that era and will refer to them when stumped. In 1988, things went digital and via INews we are able to search via key words, slugs, scripts, or dates. By 2007 we had Avid and store things now via DNA and are entirely digital. We were securing interns from the U of I’s Library Sciences program to help with keywords before COVID and plan on returning to that very soon.”

What methods do you use to convert video tape to digital? 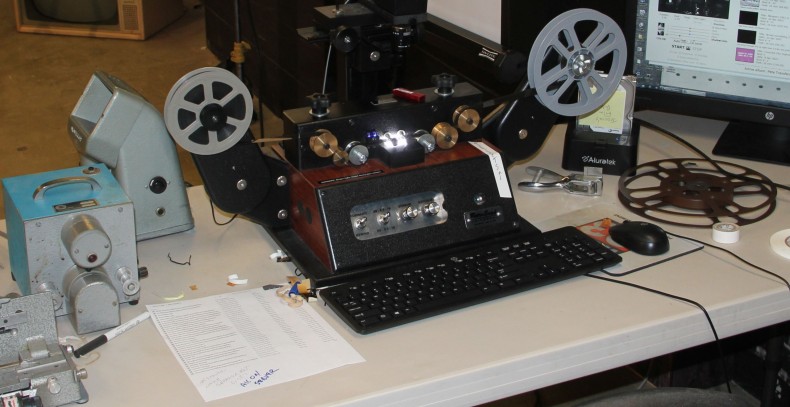 The station made the corner across from The Vault set in its basement into the film transfer area.

How do you convert film to digital?

Until TV film virtually disappeared, RCA's TP-66 film chain and the Rank Cintel Mark III flying spot scanner and Bosch Fernseh FDL60 telecines made film-to-video transfer a rather expensive proposition. Barrett said “We have a Universal RetroScan Film-to-Digital converter; it does silent and 16mm optical track film. We output as .mov and move it to our server. We also have thousands of still negatives of talent, the station, our commercial clients, special events, etc., that we are capturing with a high-end Epson scanner. This effort is secondary to the videotape digitization; about 1,000 of the 2,000 negs in that collection have yet to be done.”

What is the digital storage format The Vault uses?

“We capture to a rack of Drobo storage arrays, and over the weekend dupe the newly captured videos to a tape drive backup.”

Where is The Vault physically stored?

“We have a high-density sliding shelving unit formally used by Master Control to store programming tape for playback.”

How often is The Vault accessed?

“To support our newsgathering efforts, twice a week on the average. The station runs a “From The Vault” feature on the News weekly that gets played back on various other newscasts through the week as necessary. Personally, I am in there every weekday for the past 5+ years; once an hour to swap out tapes for digitization. We also are finding requests are coming in to us in increasing numbers for archival material; we do charge a research and retrieval fee. We do NOT promote a service to provide such dupes or that’s all we would do.”

What is the response of station producers to The Vault?

“Doing 9 hours of live news programming per weekday, any relevant local content is welcome. In COVID times it became surprisingly useful in filling newscasts with hyper-local content that was already done. It’s a collection no one else has, and we feel it further cements our place as the hometown station.”

What have you learned building The Vault?

“Slow and steady makes even the impossible seem possible. Another reason this was possible is that when nothing else is going on I have Production Dept employees (part time and full time) and interns chip away at the mountain of work associated with this project. Also, never trust the adhesive holding tape to the hub of a 40 year-old ¾-inch videocassette.”

When will The Vault be caught up with real time?