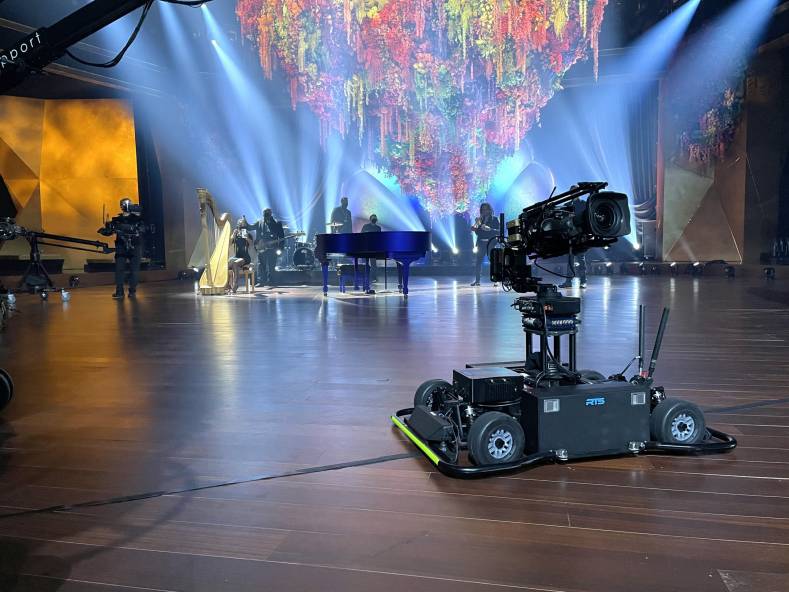 A remote camera dolly on wheels that follows a magnetic tape line instead of tracks.

RailCam Robotic Systems premiered the new RTS MagCam paired with a NEWTON stabilized camera head for the TV broadcast of the Grammy Awards.

The RTS MagCam is a wireless remote-controlled wheeled dolly with telescopic tower, that follows a thin magnetic tape line adhered to the floor. This tape can be attached or adjusted in seconds which allows for quick and safe installs of repeatable moves along a determined path that can be made in curves, straights, circles and forks. If conditions change, it is also possible to switch to free-running mode and steer away from the magnetic path.

The MagCam proved very practical on the Grammy set. Brian Sheid at RailCam explains: “There were a lot of cameras in a small room that needed to keep up with very quick stage changes. A dolly on rail tracks would have been too cumbersome and would have required many timely rebuilds, but with the MagCam, we just needed to tape a new strip on the floor in the path the director wanted.“

The MagCam system was operated by Dave Eastwood, who drove the dolly with foot pedals and controlled a Sony HCD-P50 camera and Canon HJ14x4.3 lens with a NEWTON stabilized camera system. Dave Eastwood also supplied 2 telescopic camera towers with NEWTON stabilized heads through his service company Fluid Pictures Inc and a 4th NEWTON system was provided by RailCam on a Chapman dolly. "The 4 NEWTON’s used on the show all preformed wonderful and it’s always a pleasure to operate ours. This was my 25th year as camera operator on the Grammys and I wish the NEWTON had been around back in the day as well", says Dave Eastwood.