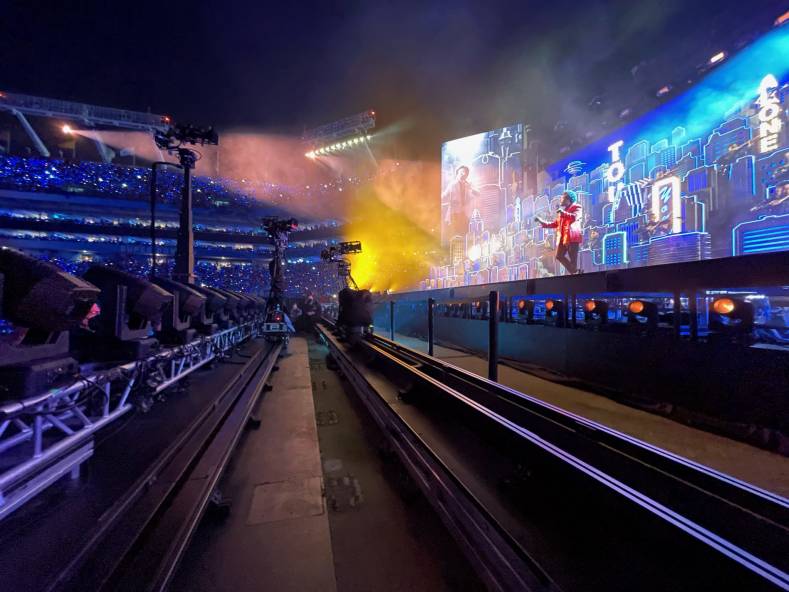 ​For the Super Bowl 2021 broadcast, they brought one Mini-C and four Newton stabilized heads mounted on telescopic towers and rail systems, placed around the stage of the halftime show with the artist The Weeknd.

These moving camera systems are operated live by skilled cameramen, that are brought in by the technical director, and they often operate one complete system by themselves. The operator typically controls the towers and rail systems with their feet, for example left/right with one foot, and up/down with the other. Then he/she controls the camera pan/tilt/roll with one hand and zoom/focus with the other. RailCam has never seen the need of pre-programmed camera movement and Brian Sheid, Technician, explains: “Many people think programmed moves is a great idea until the artist walks faster or stops for a second and the camera keeps on going right past them. Also, the magic behind a robotic camera not looking too robotic, is to have a human operating it.” For this event, RailCam brought four technicians to install their robotic camera solutions and to be stand by during the show. A few of the technicians had worked at Super Bowl before, but this was the first Super Bowl assignment for RailCam as a company.

A RailArm in front of the stage, holding a Newton stabilized camera head. The RTS RailArm is a rail system with an arm, that can lift the camera from a very low position. The rail track ran 36 feet along the stage and the whole system was operated by Shaun Harkins.

A RailTower in front of the stage, holding a Nettmann Mini-C stabilized camera head. The RTS RailTower is a telescopic tower on a rail track and Rick Compeau operated the rail dolly while Kevin French operated the tower and camera.

Also in front of the stage, there was a new RTS telescopic tower which can lift the camera from 9 to 35 feet. It featured a NEWTON stabilized camera head and was operated by Jay Kulick.

Jay Kulick also operated a RTS telescopic tower on the very top of the stage, which shot reverse angles of The Weeknd in the middle of the performance. This tower could lift its NEWTON stabilized camera head from 5 to 11 feet.

Finally, there was a NEWTON stabilized camera head mounted on a MAT XS+ telescopic tower inside the stage as a back up for the wireless handheld camera in the infinity room. This was never used but was ready to be operated Kevin French.