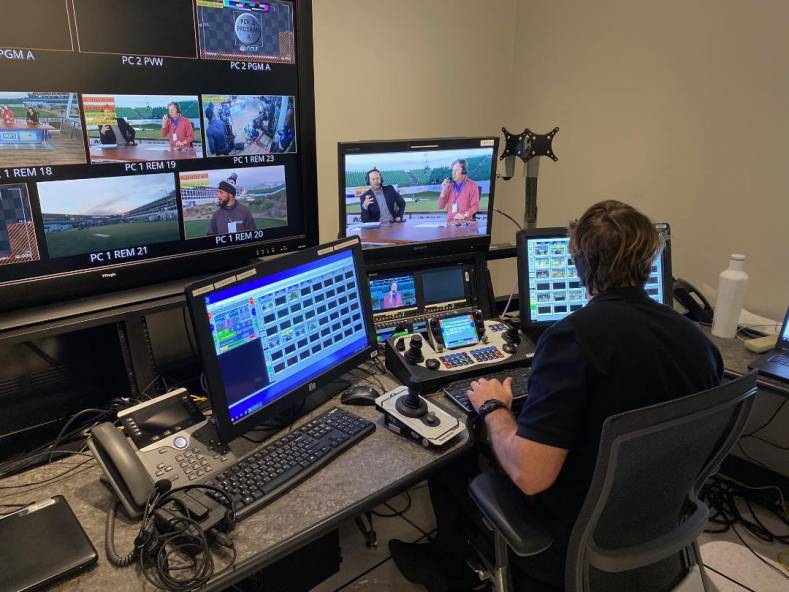 Technologies like 4K UHD got a deeper foothold into live production this year, but 1080p60 HDR remains the most commonly used format for the highest profile events. The equipment and required bandwidth costs less and signal distribution is easier to accomplish. We also saw augmented reality graphics used to place fake crowds in the stands and simulated crowd noises as part of the first telecasts to start up after governmental lockdown were imposed.

Cloud-based services got a big boost in 2020, as more content was produced with less hardware than ever before. Virtualizing traditional production technologies like video switching, audio mixing and automated file serving just make sense and this year an increasing number of broadcasters pursued this model in order to support multiple content platforms. Expect this trend to continue going forward.

For production engineers and crew, that disruption has been most stark, with some 77% of people in the entertainment business loosing 100% of their income, according to TV station KABC-TV, in Los Angeles. Indeed, production people are just happy to have a job, even though they have had to adhere to new safety protocols that forced them to rethink their individual jobs and overall workflows. To their credit, these new workflows, which helped bring back live sports on television, were configured and deployed in record time. Now that they have been proven successful, they provide a successful blueprint for distributed production going forward.

Before the outbreak, remote operations were mostly considered “At Home” or “REMI” productions and had been used for a variety of centralized productions—although it was not yet ubiquitous. A majority of the equipment and staff were located in a main broadcast center while cameras and ancillary equipment was sent to the venue where the event took place. It was considered a nascent but cost-effective way to produce multiple event simultaneously. Now, after months of successful projects, it’s the way major productions will always be done.

All of the discussion and field trials of IP networking and distributed architectures over the past two years came in handy in 2020. The global pandemic has accelerated the need to deploy bandwidth intensive solutions now, especially for sending the highest quality video and other media signals from remote destinations such as high profile sporting and entertainment venues to distant production/broadcast studios. That requires bandwidth.

Distributed infrastructures that are virtually connected via 10-35 Mbps pipes have become common, while contribution links have been deployed 100 Gb/s topologies that can accommodate backhauling thirty 1080p HDR feeds and a dozen 1080i feeds. It was done this way by NBC Sports, which produced and broadcast a college football game this fall from Notre Dame University and controlled it from its main production facility in Stamford, Connecticut.

Earlier in the year (February) NBCUniversal’s Golf Channel used robotic cameras on site at the TPC Scottsdale Stadium Course in Phoenix, Arizona and controlled them over fiber (and a distance of some 2,400 miles) using a remote control panel at Golf Channel’s Orlando, Florida master control facility. The highly portable IP-enabled system travelled around the country to support over a dozen more “Live From” PGA telecasts for Golf Channel. The completely produced show package was then forwarded from Orlando to NBCUniversal’s Englewood Cliffs, NJ facility, where it was incorporated into the live telecast.

Indeed, this and other types of remote productions— distant remote, centralized, or distributed, depending on where the staff, equipment, and facilities are located—have become the “new normal”, as they reduce travel, staff and equipment costs. Some even worked exclusively from home. Before COVID-19 these were attributes that were gaining in acceptance across the industry. Today they do all that and enable a crew to maintain safe distances to protection against infection.

Putting Up With Safety Rules

There have been some complaints about the need to strictly adhere to governmental mandates, as they add time to a production setup. However, if you wanted to remain operational in 2020, you had to comply.

New restrictions include hiring a “COVID Officer” on site to monitor compliance; continuous virus testing; having to reconfigure studios and production trucks with plexiglass safety barriers and (in one case, a vertically expanding ceiling); and split crew shifts in order to accommodate the new heath rules put in place.

The upside is that these rules have kept crews safe and allowed sports broadcasts to resume.

What Got Us Through?

The short answer is experimentation, ingenuity and careful planning. By leveraging IP-based toolsets, software-defined platforms, and cloud-based solutions, broadcasters and production teams have learned to leverage workflows where location is no longer a constraint. At the end of the day—whether it’s REMI, centralized, at home or distant remote—what the industry achieved is live production from anywhere.

Distribution Flourishes In A Time Of Need

With millions of people staying home, watching television became a new addiction and that meant content providers had to step up and fortify their distribution platforms to meet the massive spoke in demand. Using cloud-based storage, transcoding and packaging services, content owners were able to expand their reach and manage traffic loads better than they ever have before.

The cloud also allowed media companies to spin up and down channels in a relatively cost-effective manner. For example, MEGOGO, one of the largest OTT/VOD services in Eastern Europe, launched its first interactive 4K channel, “[M] 4K,” a collection of popular movies in Ultra HD (UHD) quality. Viewers now have full DVR functionality—including pause, rewind or fast forward, content selection both from the archive and the upcoming broadcasts, and options of audio tracks or subtitles—and they have cloud processing and delivery to thank for it.

As luck would have it, three new MPEG-5 codecs were standardized for use over the public Internet in 2020: Versatile Video Coding (VVC); dual Essential Video Coding (EVC) profiles (baseline and main) otherwise known as MPEG-5 Part 1; and Low Complexity Enhancement Video Coding (LCEVC), aka, MPEG-5 Part 2. All have been deployed in one form or another and are now providing efficiency and bandwidth savings at a time when capacity is worth its weight in gold.

Looking back on 2020, It’s hard to quantify how much of a financial effect the pandemic has had on media companies, but it is surely in the billions of dollars. As we emerge from this crisis, it will be important for broadcasters to take note from the industry’s achievements this year and continue to adapt their infrastructures to better support remote workflows in the future.

Sometimes good things come from bad. In the case of 2020, the industry—figuratively working with one hand tied behind its back—has become more agile, with virtually scalable infrastructures and has learned to make the most of reduced resources. The demand for content has not subsided, but figuring out how it gets produced and sent to the home is one of the bright spots of an otherwise horrible year.