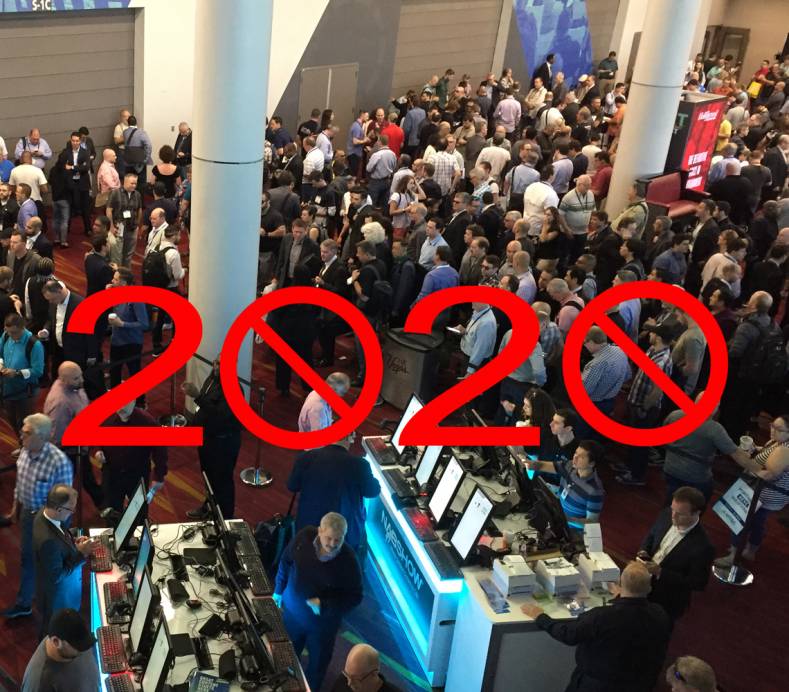 The best part about virtual trade shows is no lines, no tipping, comfortable chairs and instant replays.

Many broadcast people missed their first consecutive NAB or IBC show in years, as did most exhibitors. The 2020 NAB Show would have been my 43rd. The year has been a disaster for organized public events of any type; sports, conventions and major TV tradeshow exhibitions included.

On the other hand, 2020 is the year that existing wireless and cellular links at local TV stations provided the means to instantly adapt to the physical distancing necessary to keep stations on the air. The pandemic reminded station department heads and managers that their most valuable assets are the people who work there. The list of local job-seekers with the talent and experience to walk into a TV station and instantly fill-in is short.

Wireless cellular links and the internet are keeping station people physically separated and relatively healthy during a pandemic that keeps many TV viewers home. Broadcast TV has come a long way since the days when broadcast auxiliary service (BAS) microwave systems, satellites or the phone company were the only choices to get a live remote signal back to a station.

TVU debuted its bonded cellular solution at the 2006 NAB Show. LiveU’s first NAB was 2008. Dejero first exhibited at the 2010 NAB Show. Over the following decade, compression technology has significantly advanced and the cell site infrastructure has expanded to easily meet the needs of most broadcasters. The pandemic verified the N+1 rule at many TV stations, with N being the number of devices you thought your facility needed. As masks and distancing became societal necessities, many stations realized they could use at least one more bonded cellular transmitter.

The NAB and IBC shows were conveniently nearly half a year and half a world apart. The timing and locations made easy targets for R&D and marketing plans for shows generally focused on visitors from one hemisphere or the other. In 2020, that order went out the window. Instead, the most popular broadcast TV trade show introductions and demonstrations usually reserved for NAB, NAB NY, IBC, SMPTE and AES press conferences and exhibit demos have evolved into blogs, webinars and streaming videos when the information is ready for posting or streaming on the internet.

In some ways the internet is an improvement. I’ve attended many NAB press conferences that didn’t identify the who, what, when, where and why, aka ‘The Five Ws’. Many in-exhibit demos didn't either. Internet posts are typically pre-approved by everyone involved, and usually answer all five Ws and the always-important ‘how’. The most useful feature unique to virtual shows and technical sessions on the internet is the “Back 15 Seconds” button if you need to hear something again to clearly understand it.

New products and solutions are always fun to examine in show exhibits, but in many ways TV trade shows have also become reunions of business friends. Broadcast TV is a relatively small industry that most people don’t leave, but they sometimes change where they work. What many who regularly visited the now-cancelled shows miss most is annually seeing and shaking hands with friends they work or have worked with, making new business contacts, and the opportunity to see and touch new solutions. Most everything else that serious visitors would expect to learn at exhibits and technical sessions can be accessed and accomplished on the internet.

The Broadcast Bridge recently asked leaders in the bonded cellular segment of the broadcast solutions market what they were preparing to show and talk about with visitors at the cancelled 2020 shows.

TVU Networks was planning the Las Vegas debut of its MediaMind asset management solution which was unveiled at last fall’s NAB NY Show. 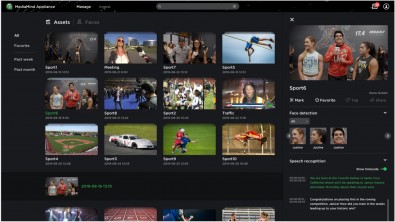 The MediaMind platform uses an AI real-time search engine capable of indexing all media content from the beginning of the video production process. It has voice and object recognition technology that can locate and index down to the precise frame within live video clips.

The key to discoverability is assigning metadata to each frame of video in a file. With that metadata, the same editor who would have needed to inspect an entire file for the precise snippet needed for a story can search directly for the desired clip and retrieve it in seconds. Editors and producers can use it to automatically find the exact content needed to help produce a story for a specific audience.

TVU Quadlock was ready for a show debut, too. It delivers low cost, untethered and synchronized multi-camera remote production using aggregated wireless transmission, and is easy to set up. Quadlock users can synchronize, lock and transmit up to four 1080p live video sources over IP with TVU One 4K mobile cellular transmitters and two AJA Video Systems 12GM standard adapters. It can reliably transmit up to 120Mb/s with latency as low as a half-second using TVU’s patented IS+ technology.

TVU also hoped to debut TVU Partyline, a groundbreaking development for socially distanced TV production, integrated into TVU Producer. With Partyline, call participants can achieve a unique level of communication and interaction from remote locations as though they were in the same physical studio while producing live and pre-recorded content. It enables production people, talent and tools to collaborate remotely in real time with full HD video quality and perfectly synchronized audio. The company was also hoping to show exhibit visitors a commercially available TVU One with internal 5G modems.

TVU is fully involved in pandemic business continuity initiatives such as TVU Anywhere for at-home anchoring and reporting, and TVU Grid for government and broadcast pool feeds of live video for national/international distribution.

LiveU opted for a virtual press conference to launch the LU800, joined by two of its key sports broadcasting and production customers. Should the other shows have taken place, LiveU would have demoed the new unit and its capabilities. 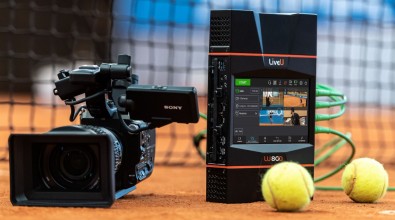 LiveU planned on using a courtside studio to demonstrate its latest solutions at the Las Vegas NAB Show.

The LU800 combines multi-camera production and superior video and audio capabilities with mission-critical transmission in a native 5G unit, and it supports up to four fully frame-synced HD feeds from a single unit, using powerful IP bonding of up to 14 connections. The unit provides the highest-quality video performance, with up to 4Kp60 10-bit HDR transmission for optimal color depth and richness, as well as up to 16 audio channels for high-end productions.

The LU800 takes news and field production to the next level, bringing together 5G/4G and remote production in a multi-camera unit. For the sports industry, the LU800 provides a way to cover more events without spending a fortune on dedicated on-site production and satellite trucks, because everything can be produced from a central control room with minimal people on site.

LiveU also hoped to demonstrate its set of production tools for smooth communication between on-site crews and remote production teams, including Video Return, Tally Lights and Audio Connect. Live feeds can also be shared with a larger audience as part of an end-to-end content workflow, with the LU800 (and other field units) combined with the LiveU Matrix cloud-based content management and distribution solution.

Joyce Essig at LiveU said “While there are clearly significant challenges across the market, we see the need to work together to keep productions happening wherever possible, while adhering to social distancing regulations. This requires not only technological innovation but also working more closely than ever with customers to understand the precise requirements of each production. That is clearly a two-way street with LiveU able to share its ever-growing knowledge across remote production and beyond.”

Dejero was preparing to debut its Core 5.4 software when the 2020 shows were cancelled. 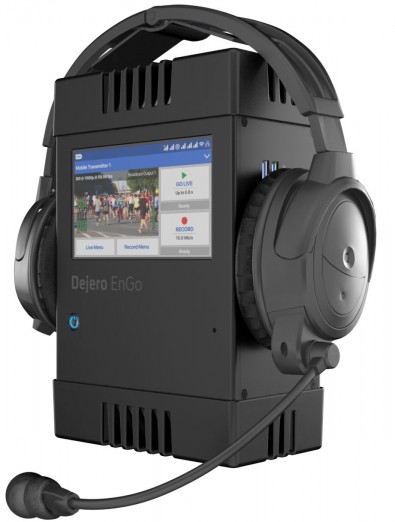 Dejero Core software is designed for users to get more from their existing Dejero hardware. It runs on all Dejero transmitters, encoders, transceivers and receivers, and includes proprietary Smart Blending Technology that works in concert with Dejero’s unique hardware/software Hybrid Encoding Technology to deliver high-quality video in the most challenging bandwidth-constrained scenarios.

Core 5.4 software also provides enhanced AES-256 stream encryption that allows users to securely transport audio and video data. AES-256 encryption is the strongest and most robust commercially available encryption standard for securing electronic data. The encoder dynamically adapts based on the amount of motion in the scene being captured.

Version 5.4 also brings two-way intercom communications to several Dejero products, including the EnGo 1.3 and EnGo 260 mobile transmitters, as well as the WayPoint 104 receiver. Multiple performance and reliability improvements were also made for EnGo 1.0, EnGo 1.1, and EnGo 1.2 mobile transmitters. Two-way, full-duplex voice communication between the studio and field personnel with the new intercom feature gives users a second communication channel on top of the existing one-way interruptible foldback (IFB) channel. It supports real-time communication from the field to the control room, and it allows for one channel to the talent and a separate channel to the camera operator, ensuring everyone is synchronized.

With the release of Core 5.4, users of the FlexPoint 111 transceiver can now transmit and receive resolutions up to 4K UHD at 60 frames per second, with live bitrates up to 60 Mb/s. 4K UHD is supported in both live and recording modes.