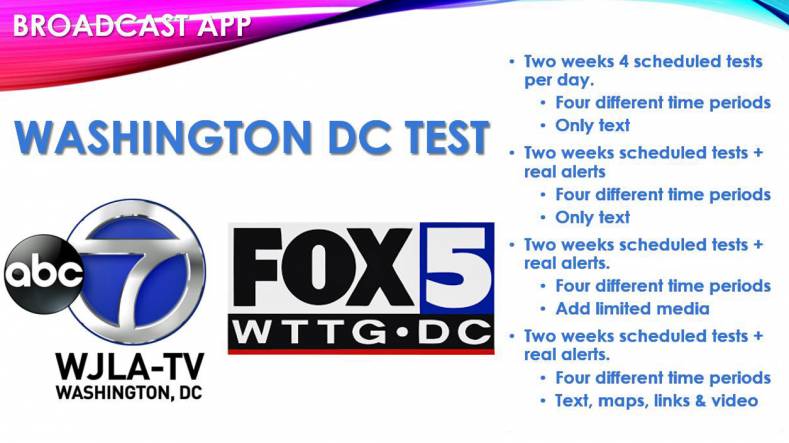 Testing includes ramping up alert tests in four different time periods every two weeks, so more people on separate shifts can experience it.

The first webinar on the impact of NextGen TV on local TV news was recently presented by Sinclair Broadcast Group. In it, plans were revealed for a SBG pilot for advanced emergency alerting and informing, starting off with the news functions at stations WJLA and FOX5 WTTG in Washington D.C.

Moderator Fred Baumgartner with One Media 3.0 began the session by reviewing what traditional TV news has always been. “It’s 10 o’clock or 5 o’clock, and its a linear half-hour with a lot of commercials in it. We also all know what a traditional alert is like. It’s a big red screen with a bunch of angry noises and it tells us to do something, with a bunch of tests along the way. NextGen TV broadcasting informing and alerting is an entirely, completely and 100% different.” The BA gives the viewer power to filter how the TV responds to information and alerts.

NextGen TV depends on the Broadcast Application (BA) because NextGen TV is user driven. The BA allows the user to determine what they are going to see. If there is a minor alert such as a school closings for snow, and they are one of the 500 people that go to a particular school, they can elect to see that specific alert without watching a long crawl of school closings. “Emergency alerting never interrupts the programming unless it is a very, very bad day,” Baumgartner said.

He continued, “In the background, us broadcasters will be sending a lot more alerts and information than we ever have before, but it is going to go to the user who selects from this what they are going to see and in what manner.”

“This is all about reducing friction,” he said, which is “how difficult it is for the user to get their content.” Low friction would be clicking on a box, or a one-line interface with no complexity. OTT app content requires lots of searching and waiting for it to be accessed and brought up.

NextGen TV marries the broadcast ATSC 3.0 element with all the features and functions that we find on the internet and OTT applications, and we have eliminated a great deal of the friction. TV goes to a lot more people because you don’t have to subscribe and it’s not a bunch of little groups, it is broadcast. Broadcast is available to everybody and it can light up a million people’s screens simultaneously with the same kind of messages with the least amount of friction.

Lane Michaelsen is SBG Group News Director and with WJLA, the ABC affiliate in Washington D.C. WJLA is the location of the SBG pilot for advanced emergency alerting and informing, starting off with the news functions at the station.

Michaelsen began by saying many alerts come through TV stations. Some come from official organizations and a station may often send out alerts on its own, such as weather, traffic, flooding and others. We want to use NextGen TV to enhance the user and producer experience, with the least amount of friction to post or absorb the content.

“What we’re working on within the BA is a producer or user-friendly app that makes uploading the content easy, that we can also preprogram content to go out without ever being touched and is fast. Those are four things we rarely get in any product,” he said.

“A traditional news producer has a lot of content sitting in front of them every day, such as alerts, watches, weather, top stories local and national, sports and entertainment. We’re working on a tool to allow producers to access that information quickly, and then provide it to the users or TV viewers. With the tool, the alert gets pre-populated into a story template which allows the alert to pass through. Many urgent alerts don’t need to be touched, such as tornado or severe thunderstorm warnings which usually are transmitted untouched,” he said. On the other hand, you might not want to send out a flood warning that only concerns 5% of the audience. Someone at the station must decide yes or no.

The other part of the Producer Tool is that it can preprogram alerts. A severe thunderstorm warning can be preprogrammed so that it goes out with a link to the station website for the latest information, or a link to a live camera, station radar, or live radar built into the alert. This allows multimedia alerts to be sent out at any time without being touched by a producer. It can be helpful for non-news stations, or unattended at 3 a.m., because the alert can automatically be sent out in the multimedia fashion. 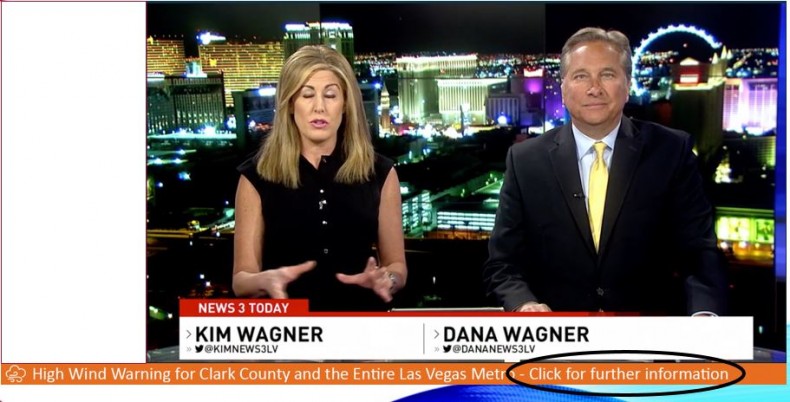 Viewers who click for further information will go to multimedia for their specific location.

Every kind of alert from station alerts to Amber Alerts, or to information that something is happening in the viewer’s neighborhood all pass through the same system. Alerts offer viewers the choice to ‘click here’ for further information, or to keep watching TV. If they click for further information, it could include live video, individual images, and links to other things and multimedia content that might be of interest.

“What we’re trying to build is a multimedia content presentation that the users get to determine ‘how much content do I want on my television?’,” Michaelsen concluded.

Baumgartner asked how this new technology will affect the staff. Michaelsen replied, “We don’t want to make this a major burden on people. We want to work within the current workflows, but we’re going to test it. WJAL the Sinclair station and FOX5, the FOX O&O station in Washington D.C. are working on a partnership there so that we can test, over a 60 day period, how this will work and what the workflows will eventually be. We have an idea, but we want to get within the newsrooms so that we can actually determine how it will work.”

“There is not a specific date for the test as we are waiting for a few technical items to be completed,” Michaelsen told The Broadcast Bridge following the Webinar.

After tests with text-only, limited media, text, maps, links and video conclude, we will interview the people who produce these alerts so when we move it out beyond the test phase we’re presenting people not just a platform to build the alerts, but a workflow to present them.

EAS messaging that contains both alerts and information has generally been the prevue of Master Control and for the most part bypassed the newsroom. “TV news stations are often deep into covering weather, fires, floods and other natural disasters well in advance of official EAS activation. It makes no sense to interrupt live coverage of a tornado warning, with all the rich content broadcast has to offer with an EAS alert,” he said.

In NextGen TV advanced alerting and warning, the newsroom becomes the center of information for processing and distribution. “I am extremely anxious to see the results of the tests at FOX 5 and WJLA because that will give us some critically needed information as to how this next generation of alerting and the geotargeting of alerting will impact newsroom workflow. It could be a tremendous game-changer for newsrooms across the country,” Shelley said. “I think it’s going to make local television news much more relevant than it is even now.”