An optical director’s viewfinder shares all those benefits, though it is invariably a tool of big productions. Partly that’s because it’s not a low-cost option, but it’s also most crucial on shows where the full camera rig may be too unwieldy to move around quickly to find a shot. That’s also a part of the production world in which there’s very little tolerance for technology which demands intricate setup and painstaking operation. We wouldn’t usually expect to see people whip out one of the viewfinder cellphone apps on the latest superhero blockbuster. They’ll show framing, assuming they’re properly set up with a knowledge of the phone’s own camera, but they don’t have any of the benefits of a proper optical system and phone batteries are shockingly short-lived under constant use.

Dwight Lindsey is owner of Lindsey Optics, whose experience in the optical engineering for film and television spans more than three decades. Lindsey tells us that he first began thinking about a viewfinder around two years ago, and that users are often interested specifically because they understand the benefits of an optical viewfinder very well. “What you're getting is what the lens sees. You're seeing that quite directly. It's not more contrasty, it's not less contrasty. It's just reliable. Alternative Rentals told me that cinematographer or directors just want to pick it up, go over there and look through it. They don't want to fiddle with it. It should be very, very intuitive.”

One complication is the fact that exactly the sort of upscale production that’s most likely to rent a viewfinder are also the most likely to be shooting on big-sensor cameras. That needs to be reflected in the design of a viewfinder so that framing and depth of field are properly represented, and Lindsey’s design implements an interchangeable optical module to accommodate both large formats – around the size of an Alexa 65’s sensor – and smaller, more conventional super-35mm frames. “If I really think about this particular one, with the modular concept, we started working on that hard about a year ago,” Lindsey continues. “The large format module doesn’t have any glass in it. The smaller format one does, to get the correct magnification. The concept is we always have the same groundglass frame and the same groundglass that’s slightly bigger than Alexa 65.” 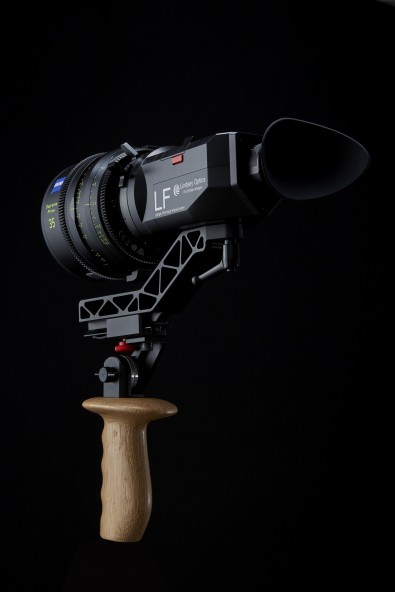 Optical viewfinders are still giving LCD monitors a run for their money.

Physically, the viewfinder is of fairly conventional layout, although, understandably, built rather larger than usual. There’s a sliding rail between the grip and the optical assembly which is, Lindsey says, very necessary for balancing the bulkier full-frame lenses, things like the Arri Supreme Primes, that the viewfinder is designed to accommodate. The lens mount is LPL natively, with a PL adaptor supplied, and the eyepiece will accommodate a +4 to -4 diopter adjustment.

Lindsey’s is not the only viewfinder available that can preview sensor sizes beyond super-35mm. There are hybrid designs, such as the IB/E Smartfinder Pro, which combines a conventional lens mount and 65mm-compatible groundglass with a smartphone. P&S Technik’s Optica Magnus viewfinder supports various types of anamorphic lens and uses framelines drawn on acetate slides. The approach of using interchangeable optical modules is new, though, and though Lindsey’s design clearly represents a niche product it quickly found a niche. “I showed a 3D printed prototype at Keslow Camera, and there were seventeen people in the room. I said ‘I didn’t expect such an audience.' I loaned another one to Camtech, another rental house. They wouldn’t give it back to me.”

These early loaners provoked feedback that Lindsey, mindful of how particular his market could be, was happy to accommodate. “One of the early feedbacks we got was that they'd like a larger diameter eyepiece. At the time the diameter was 12mm; they wanted 20 and we could do 18. So, the 18mm eyepiece is a couple of weeks away from completion. That requires six screws. We'll do that for all of them.” One popular request will come as no surprise: “Everyone that we've shown it to hopes we can have an anamorphic module, 2:1, 1.33:1, 1.8:1, whatever. We're not sure about that. I wasn't willing to complicate my optical designer's life and the design until we had a product that was proven. I had a plan to start on that before the NAB show, before now, but as we got stalled last month [for quarantine] I pushed that back… we're either going to need a slightly larger larger viewfinder, or, his idea is to put the anamorphic back in the eyepiece.”

In the end, a viewfinder like this is a very specific horse for a very specific course, and hardly an impulse purchase for the independent filmmaker. Even so, there’s something about its existence that tells us something about the push for analogue solutions in the now firmly-digital world of filmmaking. It’s a real-world optical response to a problem that might otherwise be solved electronically, and yes, that probably does mean that we could expect to see ongoing demand for anamorphic compatibility.

Finally, yes, there’s now an angled adapter for the eyepiece so that it can be viewed from directly above. That crouching director we talked about might soon be able to line up a shot in a more comfortable, if less traditional, position.