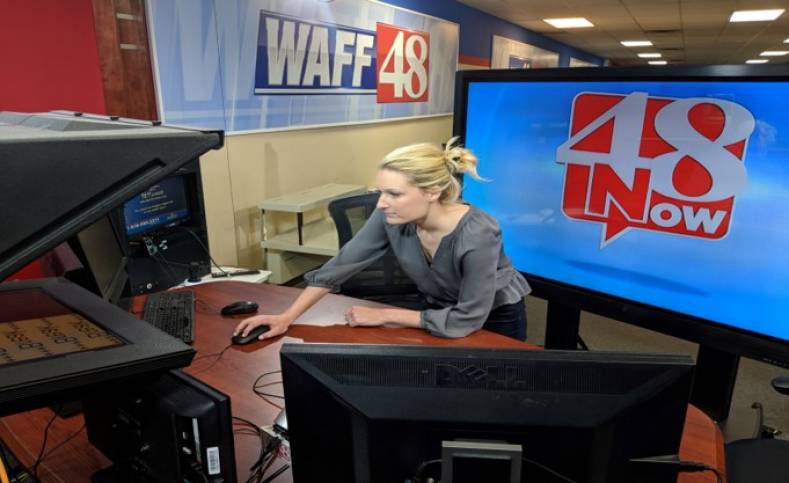 Reporters for WAFF-TV, the NBC affiliate in Huntsville, Alabama, have seen their share of weather disasters and learned to adapt to working from home for short periods of time. It goes with covering the territory. The current pandemic situation, however, is another story all together. It’s a story that, with each week, brings mental fatigue but also a can-do spirit to help the local community get through the crisis.

We’re accustomed to tornado coverage in Alabama,” said William McLain, assistant news director at WAFF-TV. “But it’s been tough trying to figure out how to get everyone working remotely. We understand how to work from out of the studio, but that’s usually a 72-hour ordeal. This [epidemic] feels a whole lot like that, it’s just sustained. Being able to get folks proper lighting and teleprompting solutions has been a challenge.”

Reporters are using mobile phones and LiveU cellular transmitters in their homes along with JVC compact cameras and an IFB/intercom app on their mobile phones called Unity. Unity Intercom is a Full Duplex intercom system that connects over WiFi or cellular data. It consists of two parts, the Unity Client app that run on mobile iOS and Android devices and the Unity Server software running on a Mac. For teleprompting, they’re using an iPad running ENPS Scripter software. 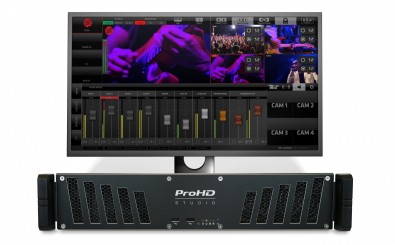 Also helpful in these trying times has been a new automated four-channel live streaming studio system from JVC called the ProHD Studio 4000S. The system was purchased about a year ago for its 48 Now Center digital studio—a small 15x15 space in the corner of the main studio, named for its digital channel number—to raise the production value of its social media and digital platforms and increase content output. It leverages a touchscreen switcher interface, two robotic JVC pan, tilt and zoom (PTZ) cameras and a JVC PTZ camera controller.

For the past month the system has been getting a workout, helping to cover up to ten COVID-19 related press conferences a day with a single operator. It has also been used to produce special content, including a series of SEC college football shows—both pre-recorded and streamed to social media—and local elections. The station has also extended its streaming coverage to complement on-air reporting of major local stories that require reporters to be on-site for several hours.

“When it comes to the JVC switcher, it gives us the most flexibility to talk over the video and add additional feeds to support a news segment,” said McLain “We have it set up in a way that we can say, where do we want that stream to go to? Do I want it to be just a Facebook feed or do I want it to go to all of our digital platforms? Or do I want to go to digital and TV. That decision can be made very quickly from the 48 Now Center.”

He said the station’s main Grass Valley Kahuna switcher is due to be replaced with a full automated news production solution with Vizrt graphics later this year. In the meantime, when they want to set up double and triple box setups, the JVC 4000S is the better solution. 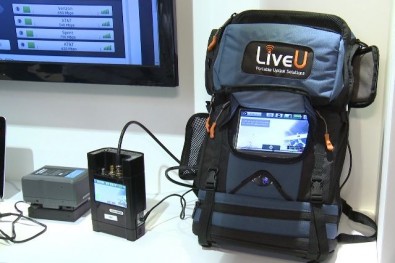 The type of shows that we regularly build now with the JVC switcher are hard to do with that GV switcher, he said. They have been a number of reports on Facebook Live, but wanted to find out how they could increase the presentation level, not only on social media but also other digital platforms that Gray TV (WAFF’s parent company) owns, all simultaneously.

“It’s been one of those things where the JVC system was an investment in our digital platform, but it’s ended up helping in so many other ways,” said McLain. “That’s the nature of news production now. All resources are deployed whenever we need them, there is no segmentation of TV and online like there was in the old days. We’re all multi-platform. We know how to do it all.”

To his point, McLain started at the station as a digital content producer and worked his way up to assistant news director by taking on a number of roles. At WAFF, the ProHD Studio is tied into the station’s Evertz routing switcher. This allows operators to take shots from the 48 Now Center’s PTZ cameras as well as the existing JVC GY-HM600 ProHD Series cameras used in the station’s main news studio.

The LiveU bonded cellular technology has also been a life saver during these trying times. Reporters are all issued a JVC camera for news gathering. Currently, half of them are using LiveU backpacks to go live via their JVC cameras. The other half of the station’s reporting staff, as well as its anchors, are using the LiveU app on their station-issued iPhones.

Most reporters have a secure WiFi connection in their homes, so sending video back to the station has been relatively easy. Reporters also use LiveU’s mobile app on their phones or iPads to capture and send video.

“We’ve had the LiveU mobile apps on reporters’ phones for a while, we just haven’t had to use them that much, until now,” said McLain, adding that the preferred method is to use a handheld camera with a backpack transmitter in the field. Now reporters and anchors are able to funnel their stories into the station quickly.

“We’re also using the Unity app-based IFB system, which has been extremely important when you’re trying to do live shots from the 48 Now center,” he said. “We needed an IFB system that was separate from the station’s main ClearCom system. If we were using the same IFB system and we were on air, then 48 Now would be rendered useless because then I can’t talk to my reporters until the main crew is done with their newscast.”

Now all IFB is software based, enabling them to easily assign channels as necessary. This allows McLain and the 48 Now operator to cue talent and give reporters the proper cues. The software has also been integrated into the station’s main ClearCom system.

The best part is that, despite the virus, the station has not cut back on its typical six hours of daily news programming.

“A lot of the technology we need for remote reporting, we already had, but just didn’t put it into practice like we are now,” said McLain. “These are definitely challenging times, but we’ll come out of this with some new tools and tricks that we didn’t use before. We’re learning how to cope with this on a day by day basis and will be a better news organization because of it.”