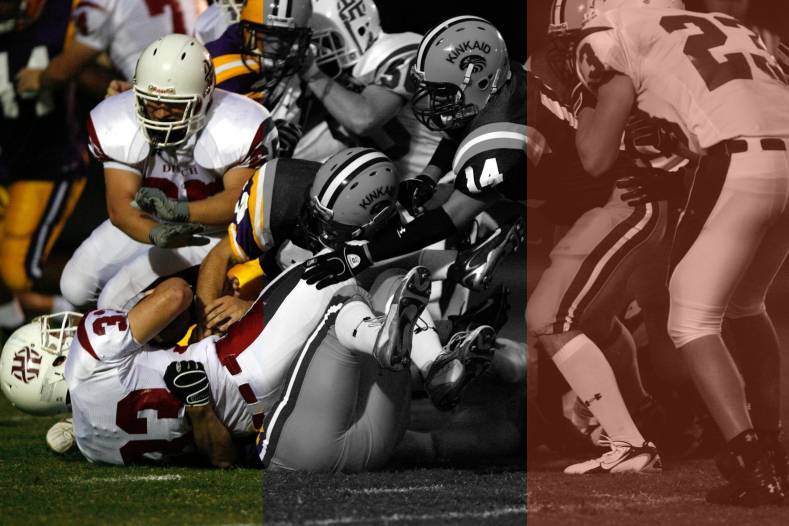 Remote Production is one of the drivers for video and audio over IP distribution. The flexibility IP offers delivers greater scalability and flexibility and provides more options for solving complex workflows. However, this is not just confined to existing working practices, IP empowers broadcasters to rethink and optimize working practices to deliver unprecedented efficiencies.

Moving production crews back to a central studio helps broadcasters make better use of their resources to deliver more programming for ever demanding audiences giving them greater choice. However, this model of operation creates many new challenges. Although they’ve already been solved by vendors, understanding the intricacies of these solutions is key for any broadcaster looking to adopt the Remote Production model.

Remote Production isn’t just about moving crews to a centralized location but instead is about giving broadcasters much more choice. The flexibility this system offers is unprecedented and many factors influence the best operational solution.

This series of three articles will discuss the many solutions available and their respective advantages, and will look at how broadcasters can leverage the flexibility to deliver the best system possible to facilitate live events from all over the world.

Remote Production is gathering pace as it continues to add more benefits to the production value chain. As a solution, Remote encompasses many different disciplines and workflows to deliver the best productions possible. In the first part of this three-part series we take a deeper look into Remote Production to further understand its benefits.

Traditional Outside Broadcast units are hugely expensive, both in terms of capital outlay and operational costs. The time taken to design and build them also has direct implications for cost. Not only does the electronic equipment within the unit have to be serviced and maintained, but the actual vehicle must be kept on the road. Although the maintenance schedules are improving, the vehicle is still a mass of moving parts that can fail and quite often all your eggs are in one basket.

The costs of the truck and fuel may seem insignificant compared to the cost of the hundreds of thousands of dollars’ worth of broadcast kit, but many industries are realizing the effect global warming may potentially have on their brand. That is, if you’re not doing something to reduce your carbon footprint, then your brand may be affected.

As we move to IP, one of the major advantages of using IP as a delivery mechanism is that we can take advantage of circuits used in other industries. For example, IP managed circuits are used throughout the IT industry for connecting different sites together. 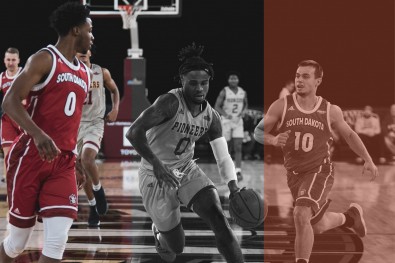 Telco’s adopted IP due to its flexibility and that it is transport stream agnostic, that is, an IP datagram has no knowledge of what type of data circuit it is being transported on. It is equally happy to work on Ethernet, optical, DSL and 4G, to name a few. This has huge advantages for the Telco’s as they can move IP packets around their networks much more easily, and also exchange IP datagrams with Telco’s. However, this also introduces some interesting challenges which we will address in a later article.

Although IP as a concept is helping to facilitate Remote Production, it is not the only reason we are seeing a massive increase in its adoption. As IP compliant circuits are ubiquitous in wider industries and are heavily used all over the world, the cost of the circuit is decreasing, and the data capacity is increasing.

Broadcasting was once considered to be at the cutting edge of technology, and in some respects, this is still true, especially when we look at the advances made with wide color gamut and high frame rate cameras. However, industries such as finance and banking have had the buying power to persuade vendors to invest in building faster networks capable of distributing IP with breathtaking data rates.

These massive data rate increases have had a significant influence on the adoption of Remote Production.

The fundamental advantage Remote Production offers is that broadcasters now have a choice of where they place their kit. Like all things in engineering, a compromise has to be struck, but in essence, broadcasters have much more choice now than they ever have.

Traditional OB’s demonstrate one extreme, that is, all the kit is at the venue resulting in a complete program being produced on site. The program can be streamed back to the studio via an IP link, or satellite feed, or even a bespoke video circuit. Broadcasters, if they wish, can still adopt this model.

Key to understanding the benefits of Remote Production is to appreciate the concept of centralization. Although this may be the current buzzword, centralization has been in IT since the first IBM Mainframe computers that provided computing resource for tens or even hundreds of users. 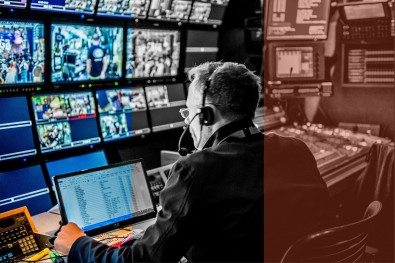 A huge expensive computing resource would be located centrally in a company’s office and relatively low computing power terminals would be connected to it, one for each user. The Mainframe, in this instance had succeeded in moving the expensive computing resource from the user to a single centralized unit. This also took advantage of the fact that any one user would only need a small time-slice of processing power and not the whole machine continuously.

Remote Production is quite similar to this as a concept. As an industry, we’re caught in a catch-22 situation as live sports and events broadcasting are very bursty. That is, events are not back-to-back throughout the week and continuous. Instead there is a cluster occurring at weekends and probably another cluster during the week. Anybody who has designed a traditional broadcast facility knows that we must always plan for the maximum demand on the system. This often leads to much of the very expensive resource being left idle for large amounts of time. This is one of the reasons cloud computing is so attractive to many broadcasters as we can increase and decrease resource at a few minutes notice to meet the peak demands. 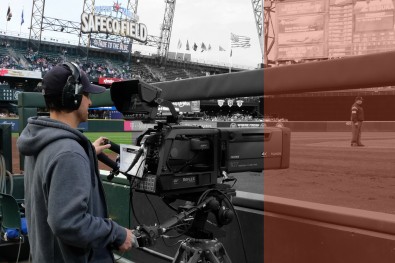 This catch-22 situation has one of two solutions; reschedule all the sports events throughout the world to match the capacity of the broadcasters skilled operational talent or manage the broadcasters, resources and skilled talented staff to work more efficiently.

Centralizing key members of the crew (A1’s) in a centralized production hub means they can now work on more sports events throughout the day. Instead of just working at one location, which may include several days of travel, accommodation and subsistence, a centralized team can work on three and possibly even four events in a single day.

The advantages aren’t just about saving money, but more importantly making best use of the resources and people available to a broadcaster to improve the quality and quantity of productions provided. This is a complete win-win outcome; the crew win because they have better certainty of work with more opportunities to demonstrate their talent, and the broadcaster wins as they become significantly more efficient and increase their output. Furthermore, the broadcaster is giving their viewers a much better viewing and potentially immersive experience. 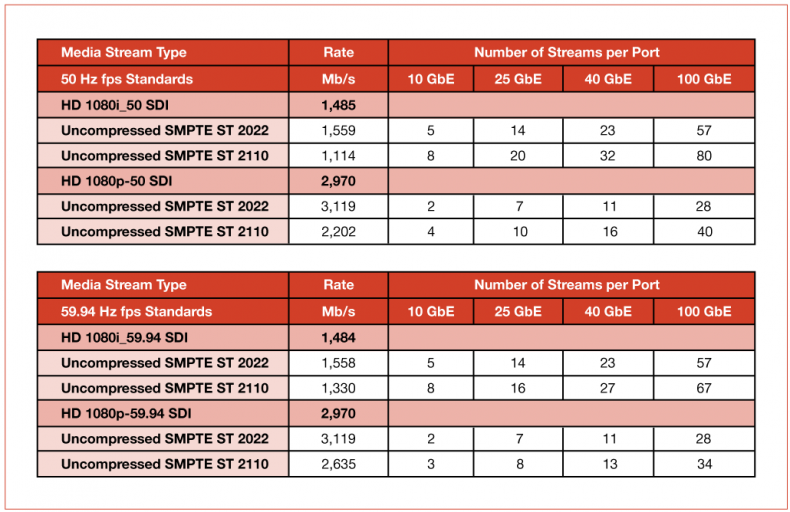 Figure 1 – This table shows the number of uncompressed video feeds that can fit on various types of ethernet connections.

Taking centralization to the opposite extreme of the classic OB truck, places all the kit except the cameras and microphones back at a central production hub. This is also possible, and a workflow used by some. It has some interesting challenges however, but we will look at these in a later article.

There are many combinations of workflows between the extremes of full OB and fully centralized production. Systems are dynamic in that they can be changed to meet the specific needs of the particular event, or events the broadcaster needs to cover.

Another major advantage of IP-compliant circuits is that they are bi-directional and, in most cases, symmetrical, that is, the data rate and latency is the same in both directions. This allows video, audio, control, tally, and metadata to be sent from both ends of the link. In the next article we’ll look at applications where bi-directional connectivity excels.

Remote Production is increasing in popularity in part due to the prevalence of affordable high-speed, low-latency IP-compliant circuits. However, there is also a significant business drive behind its adoption, that is, the ability to make much better use of the broadcasters’ resource and talented skilled crew, and at the same time increasing the broadcaster’s quality and quantity to satisfy very demanding viewers.