Superficially, level seems to be a simple subject: just a reading on a meter. In practice, there’s a lot more to it. Level matters because if it is wrong, sound quality can suffer, things can get damaged or cause interference and listeners complain because they have to keep adjusting the volume.

To see why level is important it is necessary to look at what actually happens when things go wrong. A recording made at the wrong level could be distorted or noisy and can't necessarily be put right in production. It follows that some means of measuring level is needed along with an idea of what a good level might look like.

Many different applications of audio have evolved, beginning with telephony and followed by AM radio and analog recording on various media, culminating in digital audio. In each case there were different things that could go wrong and different ways of measuring and optimizing things. The only way to understand why we are where we are today is to look at the evolutionary factors that got us here.

As the whole purpose of audio is to inform or entertain people, then the relevant aspects of the human auditory system (HAS) need to be considered. We might call that the subjective side of the problem. Quite a few aspects of the HAS are logarithmic, and so is the signal loss with distance on a cable, so it's unsurprising that logarithms have been adopted in connection with the measurement of both objective and subjective audio levels.

If we are going to do this properly, we have to look at physics, electricity, psychoacoustics and the appropriate math. We may have to bite a few bullets and look at how logarithms work.

Ohm's Law being what it is, if I take a steady supply of one Volt, and connect it to a resistance of one Ohm, then one Watt will be dissipated in that resistance. If I supply two Volts instead, the current will also double, and the power will be four Watts. The power goes as the square of the Voltage. As we will see, logarithms are also handy for squaring numbers.

The relationship still holds if the Voltage is alternating, as in audio signals or power systems, except that it is the instantaneous Voltage that matters. Power systems and audio line-up tones use sine waves, so we need to look at their characteristics. Fig.1 shows that a sine wave is one dimension of a steady rotation. It is called a pure tone because it appears to have only one frequency.

To get rid of the other dimension of the rotation, a pair of contra-rotating sources is needed. The cosine components cancel out, leaving equal amounts of positive and negative frequency in the sine wave. In the base band, we can't distinguish the positive frequency from the negative, but in a modulation scheme such as AM radio or digital audio sampling, the two frequencies show up as upper and lower sidebands. The same thing happens in modulation noise on analog tape.

From an information theory standpoint, a sine wave carries no information because it has no bandwidth. You could come to the same conclusion by arguing that as all cycles of a sine wave look the same, the later ones don't tell you anything more than the earlier ones did.

There are several ways of measuring a sine wave as Fig.2 shows. As it goes above and below zero Volts by the same amount, we can measure the peak Voltage with respect to ground. We could measure the peak-to-peak Voltage. Such measurements are useful in audio because they warn us about the onset of clipping. A typical audio amplifier can't create an output voltage any higher than that of its power supply, and if we attempt it, the peaks of the signal will be cut off. 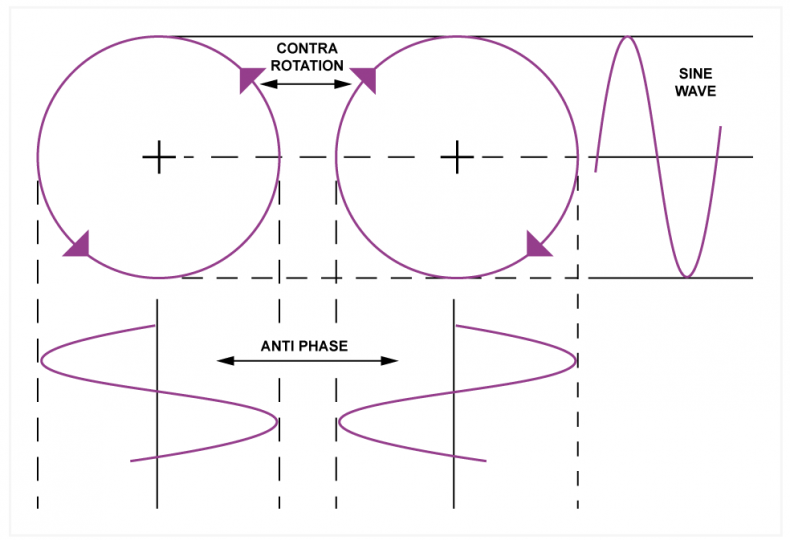 Fig.1 - The mathematical origin of a sine wave is a constant rotation, which is two dimensional. With a pair of opposite rotations, the cosine waves cancel out, leaving a sine wave that has equal positive and negative frequency components.

When a sine wave is used for power distribution, it's harder to work out the power delivered into a given resistance. The instantaneous power goes as the square of the voltage, so the power waveform is a sine squared curve, which is always positive. The power needs to be averaged to obtain the heating effect.

The DC Voltage that would produce the same heating effect is calculated by taking the square root of the average of the square of the AC Voltage. That is where RMS (Root Mean Square) Voltage comes from. It's a way of measuring AC voltage that makes Ohm's Law work as it does for DC and it is primarily useful in power systems.

For a sine wave, the RMS Voltage is obtained by dividing the peak Voltage by the square root of 2. That 110V power outlet is actually an RMS rating and the peak Voltage will be 155 Volts. In Europe the nominally 230V RMS supply has a peak value of 325V.

In audio signal signals we are more interested in what the peaks are doing and RMS measurements are not particularly useful. It's hard to judge an RMS Voltage on an oscilloscope, for example. We use sine waves for lining up, but real audio waveforms are rarely sinusoidal and have a high peak to mean ratio. As we have seen that there is no information in a sine wave, the information in audio must be in the transients.

When quantifying any alternating Voltage, it is important to specify whether the figure is RMS, peak or pk-pk. Sometimes it's obvious; sometimes it's not. Thank goodness for DC. 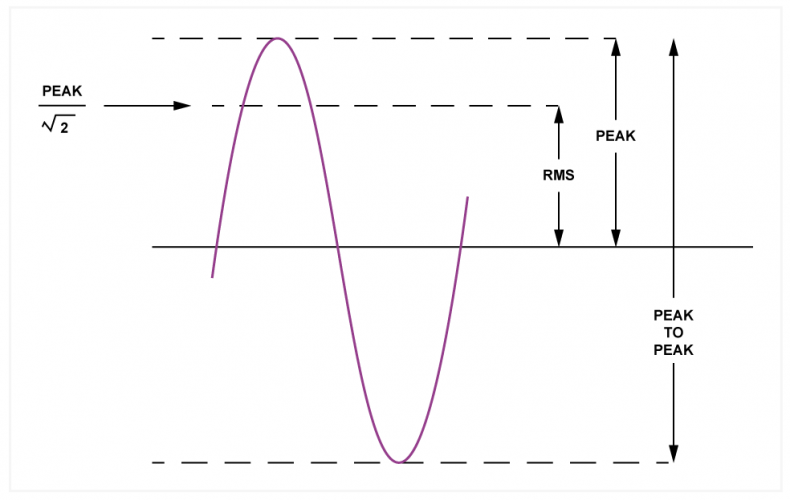 Fig.2 - Three ways of measuring level are peak, the difference between the extreme value and zero, peak-to-peak and RMS. For a sine wave the RMS level is 3dB below the peak, or the peak divided by the square root of two.

The square root of two relation between RMS and peak only applies to a sine wave. With a square wave, there is no difference. This can have unfortunate consequences. If an audio amplifier is delivering the biggest undistorted sine wave it can manage, the peaks of the wave are approaching the power rail and the RMS Voltage is the power rail divided by the root of two.

However, if the input is turned up so the output clips and becomes a square wave, so the power delivered to the load can increase by up to 1.4 times as the RMS factor tends to unity. It follows that an inadequate amplifier being over-driven can damage a loudspeaker where a more powerful amplifier remaining in the linear region would not.

Some AC Voltmeters assume a sine wave and their RMS reading is only correct for that waveform. A true RMS meter will give the correct reading on any waveform, because it is dynamically calculating the root of the mean of the square of the input.

Any discussion of audio levels must include the ubiquitous deciBel, which began life in telephony. Alexander Graham Bell's wife, Mabel, was profoundly deaf, and as a result could not hear her own speech. Bell was hoping to make some device that would convert sound into some graphic form so she could compare her own speech with that of others. This would have to be an electrical device, so Bell devised a microphone.

Two of these devices were inadvertently connected together and sound entering one came out of the other. The telephone was born and from that grew all manner of systems in which electrical signals represented sound.

Telephones transmitted sound down wires over long distances, long enough for the wires to become transmission lines and to have significant impedance, which happened to be about 600 Ohms. Transmission lines are lossy, and if a certain length of wire delivers half of the signal input power, two lengths would deliver one quarter and three, one eighth. The power delivered was a logarithmic function of the length, which made calculations harder.

The first way of quantifying power loss was called MSC, which stood for a mile of standard cable. By coincidence, ten miles of this cable reduced the signal power to about one tenth the input power.

It was subsequently decided to adopt a logarithmic loss measuring system based on a power reduction to exactly one tenth. In honor of Alexander Graham, that ratio would be called a Bel, which would be divided into ten deciBels (dB). We will look at deciBels and logarithms in the next part of this series.