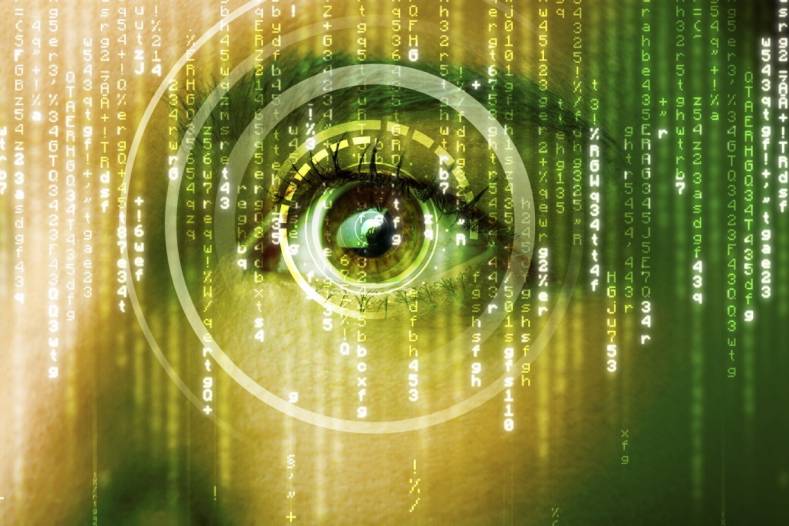 Familiarity breeds contempt and to a certain extent that is what has happened among broadcasters when it comes to serial digital interface (SDI) technology. Since SDI was first standardised by the SMPTE in 1989, broadcasters have forgotten the trials and tribulations they went through to get those initial systems working. Over the past 30 years, products have been developed that have resulted in an almost plug-and-play approach to building SDI-based broadcast infrastructure.

This article was first published as part of Essential Guide: Hybrid IP and SDI Test and Measurement

Since the introduction of commercial-off-the-shelf (COTS) hardware, broadcasters have faced a new series of challenges that, like SDI when first launched, will revolutionize the broadcast industry and allow it to remain economically viable.

Like SDI, IP comes with a suite of SMPTE standards. Organizations like the Alliance for IP Media Solutions (AIMS) have been at the forefront of establishing product interoperability. The challenge now is that we have new manufacturers involved who are not familiar with professional broadcasters’ rigorous demands.

Established broadcast systems integrators and solution architects are fully conversant with SDI-based equipment and its deployment capabilities. However, the core of future systems will no longer be a bespoke SDI router but a COTS network switch. If a facility is going to be deployed over a WAN, its IP video signals will undoubtedly encounter other devices from manufacturers outside the traditional broadcast sphere.

Although this guide outlines the next generation of test and measurement tools that broadcasters will be deploying to ensure that the already excellent QoS they deliver using SDI infrastructure is maintained and improved upon using IP, one should not forget that the traditional waveform and vector scope display will still remain relevant for monitoring the color signal forms for the vision engineer, vision supervisor and broadcast engineer’s, irrespective of the infrastructure.

While FEC, retransmission and hitless protection help against glitches, faults and failures, they don’t help if your network is continuously overloaded. To overcome this, IP networks need to be designed either with over-provisioning capacity or by using per-node bandwidth reservation technologies.

So, clearly the test and measurement techniques used in the SDI world will be replaced by a new series of tools that broadcasters will become familiar with over the coming years.

Those tools will include:

All of these new tools will replace the physical layer measurement tools, such as eye pattern, jitter and status errors, whilst the traditional waveform and vector scope display will remain relevant for monitoring the color signal forms for the vision engineer, vision supervisor and broadcast engineer, irrespective of the infrastructure.

The early adopters of IP infrastructure were restricted by their choice of broadcast products. Most early implementations therefore comprised a combination of SDI and IP products, requiring a hybrid test and measurement strategy.

Second-generation hybrid test and measurement products have started to appear on the market over the last two years, but their functionality is restricted either to SDI or IP operation. Switching between these can result in a device having to reboot and reset itself, interrupting the measurement process.

Both the LV5600 and LV7600 can support 4x 3G HD/SD-SDI inputs, with re-clocked loop-through outputs, as well as either 10GbE or 25GbE SMPTE ST.2022-6 and 7 and SMPTE ST.2110 interfaces. To support ‘True Hybrid’ IP and SDI operation both hardware interfaces need to be installed.

They also have the capabilities to allow operators to configure the display to satisfy personal measurement preferences.

The advantage of the Leader ZEN series ‘True Hybrid’ IP and SDI operation is that, as well as featuring a comprehensive set of IP measurement tools, the operator can simultaneously view both IP and SDI sources with the traditional ‘Picture’, ‘Waveform’ and ‘Vector scope’ displays, irrespective of the broadcast infrastructure.

This is ideal for monitoring video signals as they pass through the numerous IP -> SDI -> IP gateway products now being deployed. 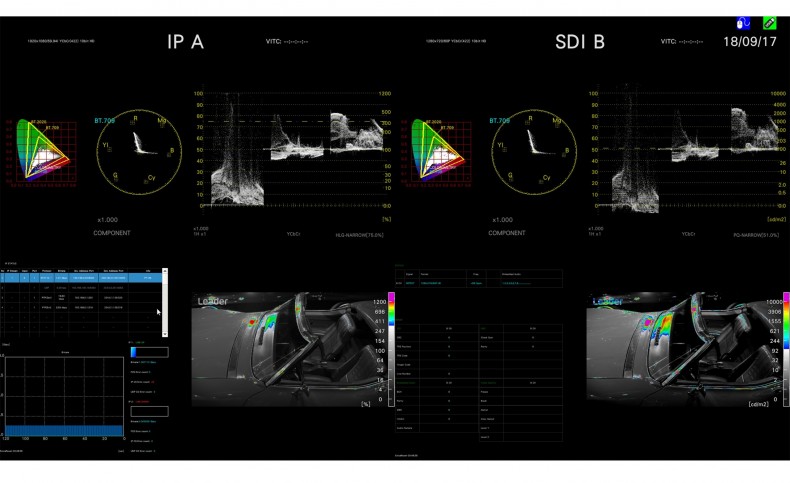 Very few static broadcaster facilities will be afforded the luxury of deploying a complete IP base infrastructure. Not all of the traditional broadcast products will be available today in IP so most broadcasters’ initial IP systems will be small proof-of-concept deployments that will initially mirror traditional SDI infrastructure. Once the concept is proven, most broadcasters will then use the IP system as a backup to the main SDI system. This is the point where ‘True Hybrid’ test and measurement is required. Production and technical staff need to have the confidence that the redundant IP system is ready to seamlessly replace the main SDI system if a major incident arises. Once a satisfactory level of confidence in the IP system has been achieved, the IP system becomes the primary and the SDI system becomes the backup. Deployment of a redundant IP system is then initiated so the SDI system can eventually be decommissioned.

On the other hand, the Outside Broadcast sector which has been able to deploy almost complete IP-based infrastructure and there have been numerous case-studies published about the benefits of OB trucks with IP cores.

OB trucks typically contain a larger percentage of IP to SDI products so there will still be numerous IP -> SDI -> IP gateway products which require ‘True Hybrid’ IP and SDI monitoring however, it’s not uncommon for them to also retain legacy video standards like analogue composite video. “The Engineer in charge (EIC) needs to instantaneously be able to view all video signals in a truck. With the introduction of IP, that means there can be three types of video signal, IP, SDI and analogue composite video. The installation on the Game Creek Video – Bravo truck gives the EIC a Swiss army knife of measurement tools, that allows them to monitor and compare different video sources simultaneously”, commented Ian Bowker – Icon Broadcast. 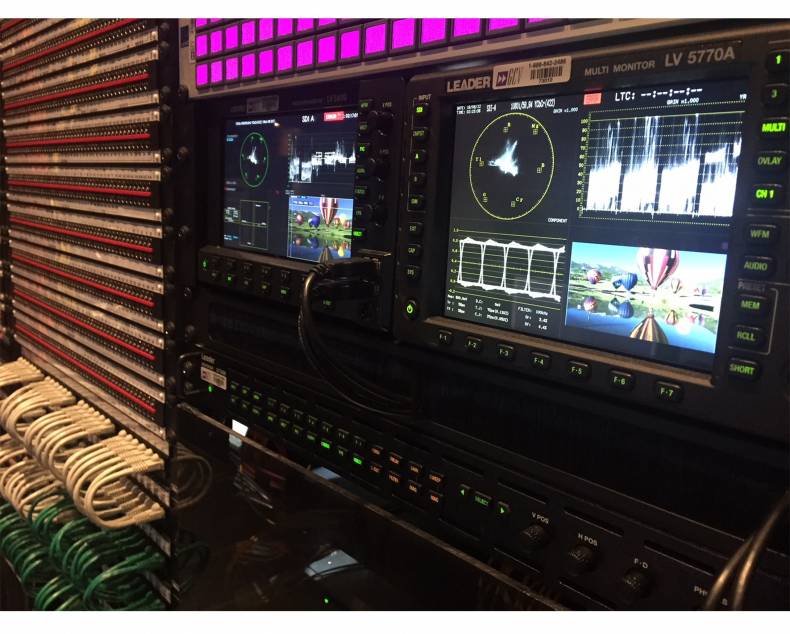 With IP OB trucks proving that SDI infrastructure can be replaced by IP, the broadcast industry is now starting to explore REMote Integration (REMI) for sports production with a centrally based static production hub using robust and affordable IP connectivity from the stadium/arena. Most static production hubs are currently SDI based so ‘True Hybrid’ IP and SDI products like the Leader ZEN series are proving invaluable as the incoming IP sources are converted to SDI.

These static production hubs will eventually migrate from SDI infrastructure to IP. By initially deploying the Leader ZEN series waveform monitor or rasterizer, facilities do not need to worry about having to replace their test and measurement products before the end of their capital expenditure life. Staff will already be familiar with the SDI operation of the leader ZEN series, which is replicated when used in IP infrastructures, reducing the need for additional training.

Both the LV5600 and LV7600 also support AMWA NMOS IS-04. The IS-04 API’s expose Nodes, Devices, Sources, Flows, Senders and Receivers. Each resource is identified by a UUID (Universally Unique Identifier), which provides a reliable reference point to build on top of, meaning that even the complex deployments can easily map control systems onto he IS-04 data model. Once you have used an NMOS based system, you will not want to return to manually typing in ‘Host Tables’.

As well as offering significant operational savings, COTS-based solutions are providing broadcasters and service providers with predictable expansion costs so it is only natural that broadcast equipment manufacturers should ensure that their products fulfill this criterion as well.

Leader’s strategy is to provide customers with tried and tested products from a broadcast equipment manufacturer that they can trust, whilst at the same time allowing them to migrate from SDI to IP. The time this migration takes will vary from broadcaster to broadcaster. Removing the need to replace SDI equipment before the end of its capital expenditure cycle offers broadcasters and service-providers a significant saving.

Leader’s ZEN series ‘True Hybrid’ IP and SDI test and measurement products address these concerns by providing a product that will assist broadcasters and production companies as they make their first tentative steps into the world of IP right through to the day when the final SDI product is decommissioned. This comes with the reassurance that operational and production staff will not require significant re-training during the SDI to IP migration.