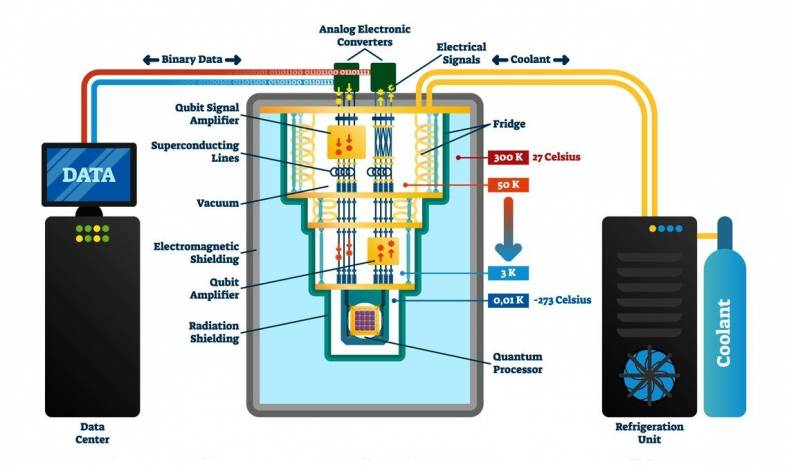 Quantum computers QPUs must operate at near absolute zero to maintain the quantum state of rare earth electrons used for computation.

Quantum computing is the biggest mathematical and computational breakthrough in the history of the known world.

Quantum computing isn’t coming, it’s here. TV broadcast engineers are the local technology experts, and someday your GM, News Director or station owner will ask about quantum computing. Here’s what you should know.

A claim that Google researchers attained “quantum supremacy” was recently published by Fortune Magazine and the Financial Times. The Sycamore processor used for the Google quantum computing experiment has 53 qubits, a quantum-computing term for bits. That kind of quantum computing power can find and do all sorts of data-intensive tasks in less than a second.

What or how quantum computing will change everything from TV broadcasting to streaming video remains to be seen, but new technologies always break into the broadcast TV market when someone does something new, useful and profitable with it. AI is already increasing the power and speed of Media Asset Management and compliance monitoring systems running on COTS PCs.

Quantum computing could someday control cameras and direct production switching at sports events with the ability to predict the next-play possibilities, control PTZ camera shots and shading them before the action happens. It could easily run a Master Control and automatically correct issues using the best judgement before they air. It can identify and predict the source of compliance issues. Like so much new technology enticing the broadcast TV industry, what it will do and where it will significantly help or change things depends on our imaginations.

Quantum computing isn’t classical binary digital computing on a COTS PC or a supercomputer. It relies on the underlying fabric of the computational structure of the cosmos to solve complex mathematical problems. It identifies the most likely, least chaotic, ‘lowest-energy-state’ solutions.

A quantum computer is an interface system that connects with cosmic reality. Quantum computing taps into that multidimensional, hyper-computational reality, and brings back answers to highly complex mathematical questions, almost without cost in terms of electrical energy consumption.

As shown in Figure 1, instead of storing binary on-or-off bits in digital computer memory, quantum computer algorithms are mapped on qubits. Qubits are two-choice devices that obey the rules of quantum mechanics. Qubits can be intentionally entangled and manipulated or 'superpositioned' to find desired results.

Figure 1. Quantum QPUs contain qubits that can be influenced by 'superpositioning' electrons.

One physical problem with qubits is that their quantum properties fade after performing a few operations. Most quantum computer applications need thousands or millions of qubits working together without losing their quantum behavior. This is one of the key challenges the technology presents. Further details of quantum mechanics and quantum computing are what make advanced physics degrees valuable.

Don’t be distracted by Google PR’s “quantum supremacy” smokescreen. If you qualify, you can buy or get time on a 2048 qubit quantum computer today. D-Wave Systems builds a 2048 qubit quantum computer called the D-Wave 2000Q. The company offers free, immediate access to a D-Wave 2000Q through the cloud with a program called Leap. According to the D-Wave website, “You get a minute of QPU access time for free when signing up for Leap, which is enough to run between 400 and 4000 problems.”

The company continues, “The D-Wave 2000Q system has up to 2048 qubits and 6016 couplers. To reach this scale, it uses 128,000 Josephson junctions, which makes the D-Wave 2000Q QPU by far the most complex supercomputing integrated circuit ever built.”

The D-Wave D-2000Q is extreme by every measure. It is cooled to 0.015 Kelvin (180x colder than interstellar space). The processor is shielded to 50,000x less than Earth’s magnetic field, and it operates in a vacuum 10 billion times less than atmospheric pressure. The system draws under 25kW, about 1% of the power a traditional supercomputer draws.

According to the D-Wave website, “A lattice of 2000 tiny superconducting devices, known as qubits, is chilled close to absolute zero to harness quantum effects.”

“A user models a problem into a search for the ‘lowest energy point in a vast landscape’.”

“The processor considers all possibilities simultaneously to determine the lowest energy and the values that produce it.”

“Multiple solutions are returned to the user, scaled to show optimal answers.”

The company provides a wealth of quantum computing information on its website.

Quantum computers have digital I/O for interface to digital computers and the cloud, but the lightning-fast simultaneous quantum computation is performed in the analog domain.

In a quantum computer, all that is necessary is to set the spin-state of the electrons in the outer orbital shell in rare-earth atomic elements, such as Holmium, to equal the large number. When the spin-state is set, the universe tries every possible mathematic combination and compiles a list of most-likely factors, all in seconds or less.

If a problem usually involving permutations and combinations, can be expressed in bits which are translated into spin-states of atomic elements and their orbiting electrons, the universe will provide the most likely answers instantly.

One of the most-likely answers could be the decryption key to an encrypted file, or the best answer to any question that can be asked mathematically. The philosophical implications of this instant power are well beyond the scope of this article.

Every atomic element has computational realities. Every atom and electron orbital shell are doing computations, trillions of times a second, in the universe and in your body. There are more computational activities happening in a few strands of your hair right now than any super-computer created by man.

What Does It Do?

Quantum computing is very good at recognizing patterns, including live facial recognition to identify the movement of crowds and the people in them.

It’s also good at breaking encryption, creating the need to replace the current encryption strategy. The National Institute of Standards and Technology is running a contest for mathematicians to develop new codes that quantum computers can’t crack.

The key to breaking encryption, or recognizing unique voice, facial or other patterns, requires factoring large numbers of perhaps hundreds of digits depending on the level of encryption or detail. Factors are two smaller numbers that when multiplied together, equal the bigger number. The smaller numbers are known as ‘basic building blocks’ and their complexity is the basis of the assumed security of today’s cryptography algorithms. A classical digital computer could take hundreds of years to factor a 200-digit number. Experts say decrypting highly-encrypted files is at least a few years away.

How Will People Use It?

If that question could be asked in mathematical terms, we’ d have the answers. A few may already know or will soon. Some technology leaders including Elon Musk are vocal with scenarios about what might occur when quantum computing is integrated with AI and robots. It’s been the premise of many popular science fiction books and movies and far too early to predict with any certainty. D-Wave’s system is not designed for encryption or cryptography.

Quantum computing is very good at recognizing patterns using factoring. Plug in 1000 mathematical stock market behavior and movement variables, and a quantum system will list the most likely best times to engage in market moves. Is that right or fair?

Today, most TV people are busy fighting the battles of producing and airing shows and tonight’s live newscasts on TV with technical perfection. Anything that makes those processes and workflows better, faster and less expensive is a welcome addition to the TV broadcaster’s tool drawer.

In February 2019, D-Wave Systems announced its next-generation quantum system named Advantage, capable of sustaining 5,000 qubits at lower noise levels. It is a new hardware and software platform designed to speed the development of commercial quantum applications. The company recently announced it has sold the first of its Advantage machines to the Los Alamos National Laboratory.