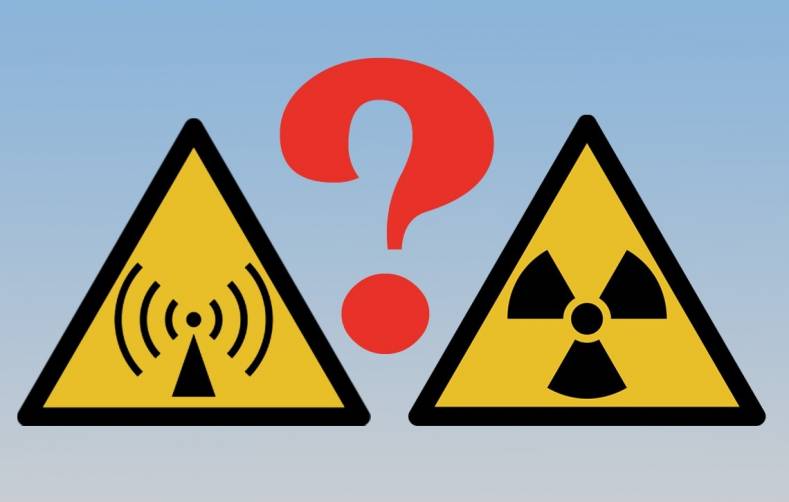 What’s known about millimeter wave health hazards? Not much.

Before radio became radio, wireless phenomena were known as 'Hertzian waves'. The first people exposed to Hertzian wave radio frequency radiation (RF) were inventors, scientists, radio amateurs and broadcasters. Many learned it could hurt. It burns painfully if touched and metal tools get hot near an active transmitting antenna. It’s unknown who was hurt first or when, but a RF burn will prompt an immediate expletive to this day. Trust me.

Shortwave and AM radio broadcast stations had been on the air for decades when Westinghouse demonstrated cooking food between two metal plates attached to a 10 KW, 60 MHz transmitter at the 1933 Chicago World’s Fair. Some radio station transmitter engineers already knew they could heat their lunch inside a high-power transmitter cabinet or near an active antenna.

Early military radar invented in the 1930’s operated in the 20-30 MHz range. The narrower beams of shorter wavelengths were needed for WWII to focus air search radar. Radar research and development during the war produced usable RF up to 40 GHz. It also marks the time people began to become aware of microwave exposure health risks. It is said to have begun with a chocolate bar unexplainably melting in a radar engineer’s shirt pocket.

The promise is to bring 10 Gb/s service to phones and the IOT, and US carriers have promised nationwide 5G service by 2020. What defines “5G service” is a bit murky, and long term evolution is the future of 5G. The exact point at which service can officially identify itself as “5G” has become more of a marketing contest. Apparently, any 5G feature gets the full badge. A few 5G phones are available today and they're not cheap. There are no millimeter wave phones on the market yet because 5G millimeter infrastructure is just beginning to emerge.

5G and ATSC 3.0 have much in common. Both will launch relatively simultaneously. Both need stronger signal coverage with high carrier/noise (c/n) ratios to obtain and maximize bandwidth. To do so, 5G is moving toward tighter site spacing at lower power. ATSC 3.0 is headed the same direction with SFNs to maintain high c/n ratios for all viewers. 5G uses OFDM modulation. ATSC 3.0 uses or COFDM. Both need their markets to buy into the new technology with new hardware.

At this point, the monetary value of both new technologies is vastly theoretical, and at some point both will have to stand alone without backward compatibility or parallel legacy systems. The scale of money being bet is as huge as the unknowns. Both need sponsors and subscribers to pay new fees no one is talking about. An overloaded rocket won't get off the ground.

5G isn’t one new technology or standard such as HDTV or 4K. It’s more a huge suite of new technologies working together under a defined new set of standards and practices, similar to ATSC and DVB standards all working within governmental regulations. Like ATSC 3.0, engineers know how to activate 5G's new capabilities but not what people will do with it.

Meanwhile, 5G is becoming a political football on national, international and local scales. In April, Brussels banned it. California municipalities such as Mill Valley, San Anselmo and Marin County recently banned 5G with similar ordinances. Most bans started with letters from the public about 5G health concerns. 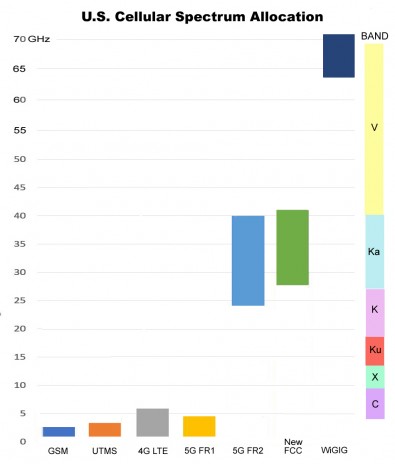 What Makes US Different

According to FCC.gov, “The Federal Communications Commission held a spectrum auction in April 2017 to help improve and expand wireless services across the country to meet the ever-increasing needs of American consumers for faster, higher capacity mobile broadband services.” Broadcasters call it repack and it forced US TV stations off the 600 MHz band.

Not seen in Figure 1 is a 100 Mhz tall line across the bottom at 600 MHz above zero too thin to show at scale. That thin line is the prime beachfront property in all of cellular world. MHz signals travel further at lower power than GHz signals, making the 600 MHz band the best option for the high-speed rural data services the FCC is pushing for. Did T-Mobile make a smart investment?

Frequencies above 24 GHz are millimeter waves. "They are called millimeter waves because they vary in length from 1 to 10 mm, compared to the radio waves that serve today’s smartphones, which measure tens of centimeters in length," the IEEE explains on its website. The new millimeter band is called 5G FR2, and it covers broad segments from 24.25 GHz to 52.6 GHz, as shown in Figure 1.

Over recent years, countries around the world have similarly cleared 600 and 700 MHZ band TV spectrum for cellular communications as the FCC is doing in the US now. That’s where the parallels of the 5G worldwide build-out ends.

While the rest of the world is planning initial 5G rollouts based on recently cleared, premium Low Band spectrum aka 5G FR1, the US is focused on making 5G FR2 millimeter waves the foundation of its early 5G service. Why?

By not joining the rest of the world in a ‘Low’ and ‘Mid’ Band 5G rollout and choosing instead to blaze the trail to millimeter waves virtually alone, has the US abandoned an opportunity to lead? The US plan relinquishes a financial economy of scale, and for secure equipment that is constantly monitored, tested and upgraded worldwide. It also seems contrary to the FCC’s push to eliminate the rural/urban ‘digital divide’ with high-speed rural internet service.

Maybe T-Mobile made a great bet that will payoff later. 5G may go nationwide, but 100% universal terrestrial millimeter wave coverage of the entire country is cost prohibitive, even with other people's money. Part of the plan is to launch 20,000 5G satellites to fill in the gaps. We'll see what the market will bear.

In any event, the US is boldly headed into a millimeter wave communications world as mysterious as the ocean’s depths. The IEEE says millimeter wave 5G sites should be placed every 250 meters to form a dense network. Others suggest every 500 feet (152 meters). Spacing that tight will be accomplished much easier using existing buildings, light and utility poles in urban areas than out in the boondocks. 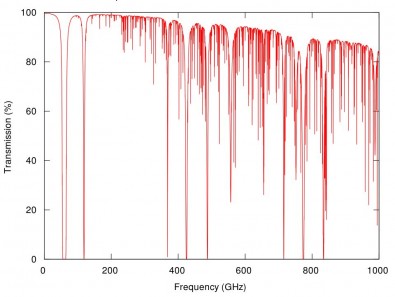 Figure 2. Plot of the zenith atmospheric transmission on the summit of Mauna Kea in the Gigahertz range at a precipitable water vapor level of 0.001 mm. Courtesy Westeros91.

Until 5G, about everything most hams and broadcasters knew about millimeter waves was they're used by satellites, Advanced Imaging Technology (AIT) airport security scanners operating in the 24-30 GHz band, and crowd-control Active Denial Systems (ADS) in the 95 GHz band. Most studies of the hazards and dangers of millimeter waves tested at approximately 100 GHz. An atmospheric absorption notch shown in Figure 2 from 34.2 to 35.2 GHz in the Ka Band, restricts its usefulness to police radar.

A RF carrier itself represents one health threat to plants, animals and humans. A different threat is what various modulations of millimeter carriers can do to living things at the cellular level, no pun intended.

Does a unique combination of exotic modulation at millimeter frequencies, including harmonics, beat frequencies and high field strength produce ionizing radiation? Typically, ionizing radiation begins at tiny wavelengths above visible light. RF is considered non-ionizing. There’s much information, disinformation and debate about 5G health threats on the internet. It’s well beyond the scope of this story and clearly unsettled science. Time will tell.

The 1000 US TV stations being repacked will have felt and dealt with the initial impact of 5G on TV broadcasting by this time next year. Fortunately, the airwaves are well-regulated, and the cell carrier industry is focused on coexistence.

5G must coexist with LTE and its design must do so in adjacent bands and in the same band. It must coexist in unlicensed spectrum and does so with techniques such as licensed-assisted access (LAA). It must co-exist in the same device, thus multiple radio transceivers in a single device can’t interfere with each other. 5G must also coexist with satellites, radar systems and broadcasters. 5G FR2 overlaps with fixed satellite services (FSS) uplinks at 27.5 to 29.5 GHz, and FSS downlinks at 37.5 to 40 GHz.

Universal 10 Gb 5G service will virtually end the TV broadcaster’s need for ENG microwaves or bonded cell systems for live shots and backhauls, but perhaps the greatest impact 5G may have on TV broadcasting might be 5G TV.