Optical disks rely totally on the ability of the pickup to follow and focus on the data track. It is taken for granted that these mechanisms are phenomenally accurate, work at high speed despite being made at low cost and need no maintenance.

As has been seen, the spot size for a given wavelength of light is determined by the numerical aperture (NA) of the lens, and in all practical optical disks the NA is sufficiently large that the depth of focus is very small; small enough that any play in the spindle bearings or waviness in the disk would exceed it. Optical disks must all use active focus systems to allow disks and spindles to be made to reasonable rather than exacting tolerances. 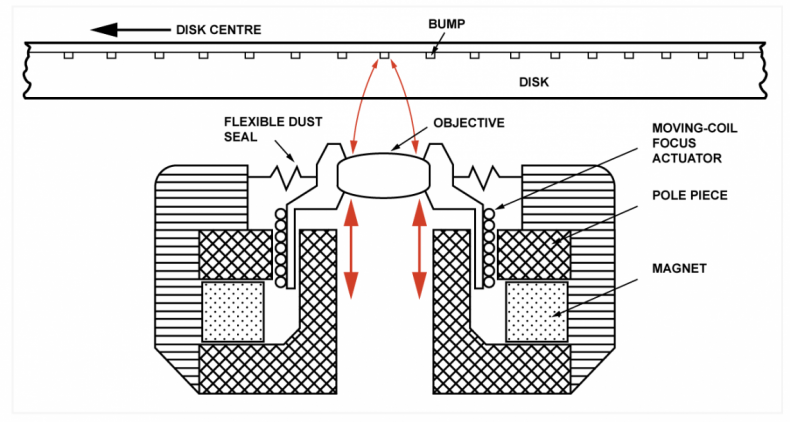 Figure 1 - As the focus servo needs to be able to move rapidly on high speed optical drives, a moving coil actuator as found in loudspeakers can be used to drive the objective lens.

Optical disks typically use constant linear velocity (CLV) in which there is a single track in the form of a spiral. An active tracking system is needed to follow a spiral track as the radius varies constantly. Superimposed on the steady change of radius due to the spiral track is an oscillating change due to eccentricity in the disk and the spindle, and in portable applications there will be further disturbances due to handling.

Fig.1 shows that adjusting focus is done very simply using a lens that can be moved along the optical axis by, for example, a moving coil similar to the way a loudspeaker diaphragm is moved. Obtaining a signal to drive the coils is a little harder. The state of focus is established by analyzing the light returning from the disk in various ways.

It is the light spot on the disk that needs to be in focus. The light on the sensor in the pickup does not need to be in focus as it is only the energy of the light that is being measured. 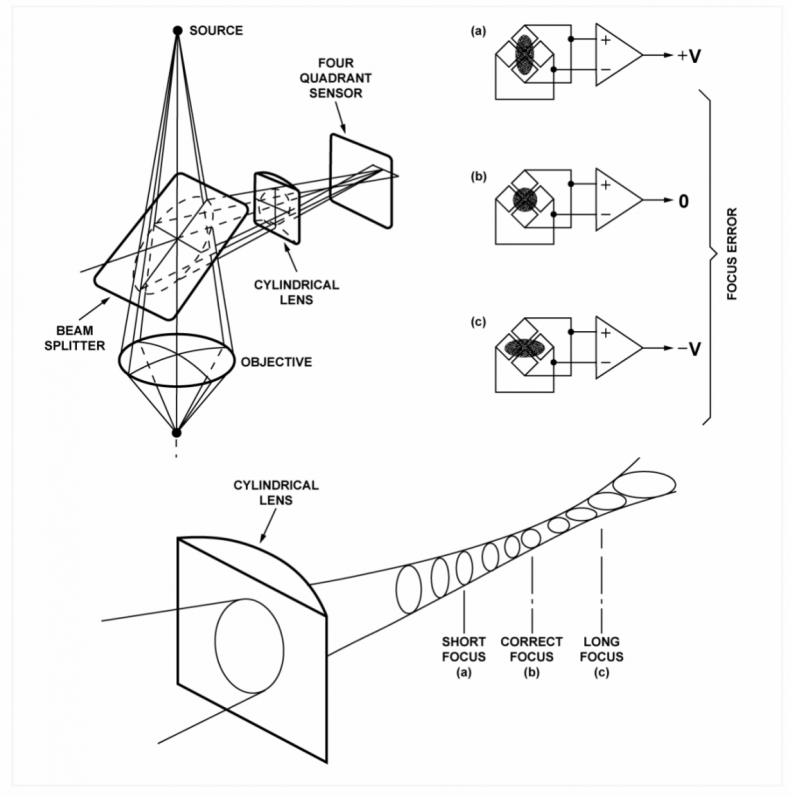 In one popular system, a cylindrical lens is added to the light path in order to cause astigmatism. As seen in Fig.2, the light spot falling on the sensor is only circular when focus is correct. If the focus is short, the light spot becomes an ellipse having a major axis parallel to the flat plane of the cylindrical lens, whereas if focus is long, the ellipse has its major axis at right angles. It is possible to establish the magnitude and the direction of the focus error by analyzing the shape of the ellipse using a four-quadrant sensor.

In all cases the replay signal is obtained by summing the signal from all parts of the sensor. It should now be clear why the channel code needs to be DC-free. The focus system is working not on a steady source of light, but on the modulated replay signal. If there were any low frequencies in the modulation, they would interfere with the operation of the servo.

The various methods of obtaining focus have different capture ranges and in some cases the lens must be driven along its full travel by a saw tooth waveform in order to find the position of correct focus, which will then be maintained. 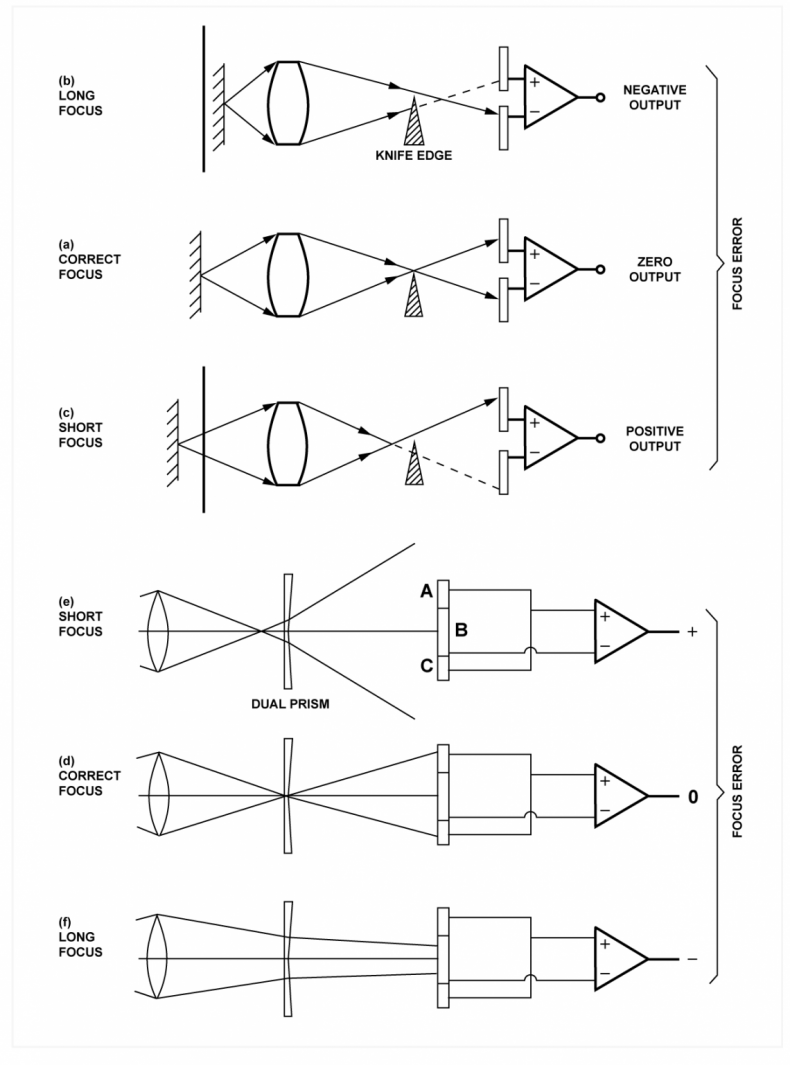 Figure 3 - In the correct focus case a) the knife edge has no effect, whereas in b) the effect of long is to reduce the light reaching the upper sensor. Short focus c) has the opposite effect. The dual prism has no effect at d), whereas short focus e) causes the light to diverge and long focus e) causes it to converge. A three-part sensor can determine which is the case.

Another method of obtaining a tracking error is to illuminate the disk with a couple of extra spots ahead and behind the readout spot that are offset from the track center. These are easily obtained using a diffraction grating in the light source. A tracking error will cause the signal seen by one of the spots to rise and that seen by the other will fall. The use of side-spots requires the pickup to travel in a straight line, whereas single spot systems allow a rotary actuator to be used.

Those of us who can remember AM radios will recall the method of tuning in, which was to rock the tuning knob to one side and the other of the station to find the best signal. A similar system can be used with optical disks. The tracking servo is fed with a small sinusoidal signal that causes it to oscillate across the track. In the presence of a tracking error, the signal will get better when the oscillation opposes the error and worse when it aids the error, so the sense of the error can be determined. Scan tracking to allow variable speed playback in helical scan video tape recorders was done in a similar way.

The same result can be obtained if the track on the disc is wavy. Recordable optical disks start life with blank tracks and there is no feature the transport can use to drive the track at the correct speed to make a recording. However, if the blank track oscillates below the pickup, the speed of oscillation will be proportional to the track speed.

As nothing else can operate without it, the first act of a player will be to obtain focus so that the tracking and track velocity servos can then work. Typically optical disks play from the center outwards, because the focus error from a disk that is not flat will be minimized near the spindle. Once focus is obtained, the tracking servo can begin to operate and the pickup will replicate the modulation in the track. On a pre-recorded disk, the track speed can be brought to almost the right value by using the run length limits of the channel code.

The phase locked loop in the data separator will then be able to achieve lock and it will be possible to read the track. Only by reading headers does the player know where the pickup is on the disk, and it may be necessary to seek in order to get the pickup to the table of contents.

Whilst audio disks play at or near real time, most optical disks adapted for computer use will use a considerably higher linear velocity in order to improve the data transfer rate. Whilst turning the disk faster requires only a sufficiently powerful motor, increasing the speed puts greater demands on the focus and tracking servos whose bandwidth must increase by the same factor as the linear velocity.

The tracking servo has the hardest job in a high-speed drive because it has to operate across the full width of the data area on the disk. In order to have the least moving mass, the tracking servo may be split so that rapid tracking needed to follow disk runout is performed by a small servo having limited travel and the slower larger movements across the full width of the data surface is managed by mounting the fast servo on a motor driven sled. The sled is driven in such a way that the fast servo is kept in the center of its range. 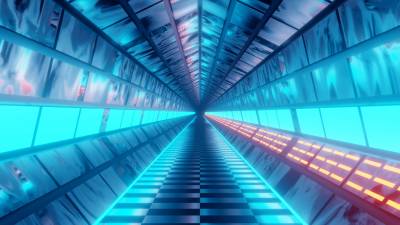