Virtual set (VS) technology has been used by broadcasters for decades to create new types of sets, complete with 3D effects and (more recently) augmented reality graphics that can be changed for different styled programs and to help the on-air presenter tell their stories better.

Motion picture professionals have also used green-screen shooting for VFX and other elements, but they often require extensive amounts of time and money in the postproduction suite in order to get the effects to seamlessly match the live-action footage on screen. Many times, however, scenes have to be reshot in order to get the desired effect, requiring extra time and money.

MR Factory, a TV and film production company in Madrid, Spain, has a different idea. Thanks to advancements in VS technology and computer rendering, it now offers real-time live-action and effects shooting on its sound stages that marry photorealistic imagery generated by a virtual set system from Brainstorm Multimedia with the latest rendering engine from Unreal Engine. For them, virtual production is reshaping the way they create content and clients are very pleased with the results. 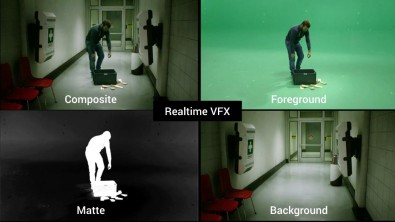 The Brainstorm engine runs alongside the Unreal Engine, which provides very high quality 3D backgrounds that are used for composited shots (upper left).

“We are targeting traditional movies that are typically shot on location,” said Oscar M. Olarte, co-fonder of MR Factory. “We can get the same result or even better shooting in the studio against a green screen. And we can save people time and money in the process. For instance, with our virtual set we can now complete more than 10 minutes of finished scenes per day, which is a very good result.”

Beyond the time and cost savings, the team at MR Factory is finding that directors have more control over the various elements of a scene when they can see the results in real time and make adjustments accordingly.

Indeed, with VS technology and a fast rendering engine, now everything can be fixed on set before it goes to post production. Because the camera feeds are fed into the Brainstorm VS system, it becomes relatively easy to ensure that the framing, camera tracking and even the lighting is correct. The post-production process then becomes much shorter and serves more as a “final tweak” to the finished film or TV series.

“Our goal is to give a director what they want in the most cost-effective way,” said Olarte. “If they want volumetric lights, we have to integrate real volumetric lights with virtual volumetric lights, so they get the shots they need fast and in real time. It also eliminates the need for later reshooting. All of the adjustments can be made right there at that moment. It’s very powerful for the directors and DPs we work with.” 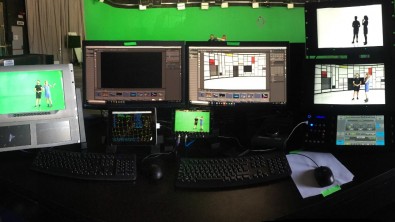 MR Factory has created a workflow that allows shooting in real time against a photo-realistic background, saving productions time and money.

In addition to a wide array of cameras shooting in HD and 4K—such as the Arri Alexa, Blackmagic Design Ursa, and Panasonic Varicam—MR Factory is using Brainstorm’s InfinitySet virtual set system to create hyper-realistic virtual scenery that replicate outdoor scenes and virtual worlds in the studio. The heart of the system is Brainstorm’s eStudio render engine, which includes tools for graphics and 3D creation as well as camera tracking. The Brainstorm engine runs alongside the Unreal Engine, which provides very high quality 3D backgrounds that are used for the composited shots in the TV series and feature films they complete on a daily basis.

“It’s almost real-time post-production,” said Miguel Churruca, Marketing and Communications Director at Brainstorm. “With the traditional way of shooting with green-screen, you have your 3D background and your characters and everything else. Then you have to send the elements to post production. The virtual effects are added and then you finish the project. This takes a lot of time, often just to fix issues.

“What MR Factory is doing is creating a workflow that allows shooting in real time against a photo-realistic background. So they can output a 4K master directly from InfinitySet and have all of the camera tracking, focus adjustments and chromakey elements perfectly in sync.”

He added that if a client needs additional VFX work, they could transfer all of the elements in layers to the VFX team to finish up the shot as required. But in some cases where a TV project need to be completed very quickly, the quality they get from the Infinity Set shoot itself is good enough to send to air directly. 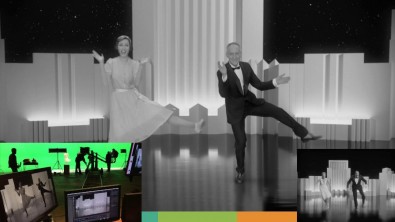 For the filmmaker, using VS technology allows them to orchestrate a shoot and bring in all of the creative elements to bear in exactly the way they want them to.

There are several features within Infinity Set that are designed for post-intensive feature film projects. One is a Lens Controller, which can be used for focus matching by importing operational data (focus) from the camera’s lens directly into the Infinity Set. This streamlines the processes involved with effects rendering, camera tracking and when you want to give the illusion of a shallow depth of field.

“We can also change the lighting of the set if we want to use DMX controls so we can adapt, in real time, the physical light to the change in the virtual set environment,” Churruca said. “Again, this way of working on set saves time and money in post and gives the director more creative control, so everyone is happy.”

MR Factory’s Olarte said that for them, Infinity Set is showing that there are still ways to be more efficient in feature film production. They have done some in-house testing where they matched up shots done with InfinitySet and others shot outdoors and most people could not distinguish which one is which. That was proof that the use of VS technology for film production is a very viable option for filmmakers.

The way the company is making use of the technology to save time and money has literally changed the way production companies now do business. Many people want to create fantastic effects but MR Factory is saying, “let’s keep it realistic looking and indistinguishable from physical sets; and do it in half the time.”

For the filmmaker, using VS technology allows them to orchestrate a shoot and bring in all of the creative elements to bear in exactly the way they want them to. They are not bound by nature’s elements or scheduling conflicts. In addition, everyone has a clearer idea on set of what they are trying to accomplish and can se the results quickly. Now, they create hyper-realistic virtual scenery that replicates outdoor scenes and virtual worlds in the studio without the limitations of previous-generation virtual set technology.

At its best, virtual production is helping to get rid of the age-old film shoot mantra: “we’ll fix it in post.”