Looking to take advantage of distribution and cost benefits, many broadcasters have expressed an interest in migrating to full IP infrastructures. However, if you’ve got a full complement of baseband equipment and workflows that your team is familiar with, it might not be practical to attempt a complete overhaul in a facility.

There are basically three different ways to tackle the migration to IP infrastructures.

The first would be a greenfield approach where a facility purchases and installs everything they need to make the jump to IP in one swift motion. This is the most disruptive of strategies since, with the technology being where it is, it involves a steep learning curve for staff. Akin to ripping off the band-aid, facilities on this track are taking a certain amount of risk but, with proper planning and guidance, can be successful. These early adopters then quickly begin reaping the benefits of IP.

Another tactic is to wade into IP waters by working first with audio streams, which tend to be smaller than video streams and thus easier to move around. In this way, staff can become familiar with IP packet switching and the network topologies that are required to make IP infrastructures successful. Once comfortable, and with some successes under their belts, they can apply their experiences towards the video side of their operations.

Finally, a “Hybrid” approach would use SDI and IP equipment side-by-side while deploying IP Gateways or transcoding systems to port SDI signals to IP or receive signals from the IP realm. Signal distribution systems like the Riedel MediorNet platform can be that middle ground between the baseband and IP worlds.

MicroN is a software-defined, 80G media distribution network device for Riedel’s MediorNet real-time media transport, processing, and routing system. It serves as a high-density signal interface with a variety of audio, video, and data inputs and outputs. But, since MicroN is software-defined, apps allow it to take on different roles such as a standalone signal processor, point-to-point transport, a multiviewer, or an IP Gateway. Within a MediorNet network, users can deploy a MicroN with the IP app on the edge of the network to acquire or deliver signals in the SMPTE ST 2110 video-over-IP format. 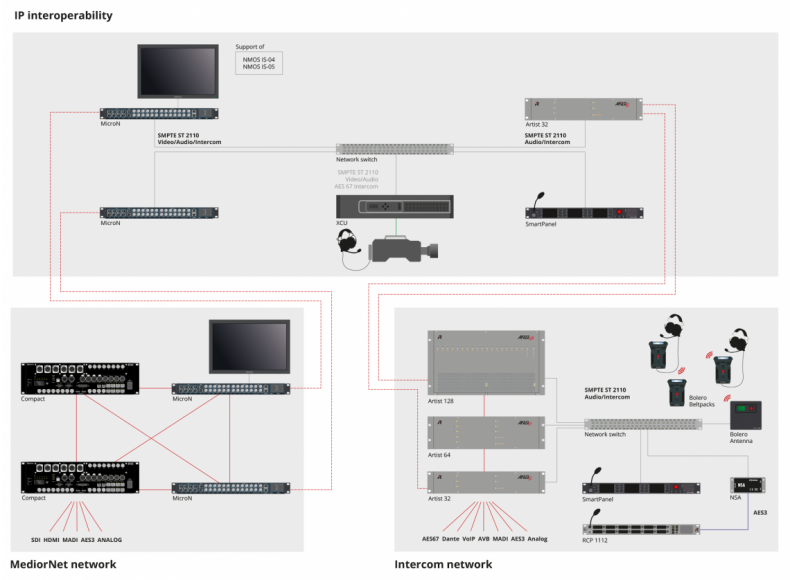 In a Hybrid workflow scenario, a MicroN with the IP app serves as a gateway to bring SDI signals into the IP realm. A 1RU MicroN unit includes support for one 10Gb optical SMPTE ST 2110 input and output, four bi-directional local baseband 3G-SDI inputs and four 3G-SDI outputs that can be dedicated to monitoring. IP stream monitoring is critical because when you start to move to video over IP, the timing becomes more important as the files become larger. However the underlying principals of how to move content across a network are the same. Therefore, deploying a product like MediorNet MicroN in the baseband realm helps establish this Hybrid workflow that can be leveraged to support multiple parts of a live or studio production.

Using the Hybrid approach, production teams can continue to use their existing baseband SDI equipment to leverage their significant SDI investment, and simultaneously add on the MediorNet MicroN appliance to their MediorNet system to get the most value out of the video-centric IT network. In an ideal hybrid world, you use the cameras and switchers as you already have, outputting baseband signals, then ingest them into an IP gateway product like MicroN IP for conversion to IP for distribution around the on-site production as well as for signal contribution back to the main broadcast center.

With the hybrid approach, the IP learning curve becomes much more gentle, allowing engineers to acquire the new skills that they will need at their own pace. Also, MediorNet provides the exact same experience for dealing with baseband signals and IP streams in terms of the user interface, removing another important pain-point on the road to our all-IP future.

So, there is no need to abandon baseband just yet! In these ways, production teams can cost-effectively leverage the benefits of IP in today’s SDI-dominated world.