IP offers the hope of cutting the cost of production if you know how to move the signal around using inexpensive equipment.

“Since it is increasingly important for producers to do more with less, I hear all the time they want to move toward using COTS (Common Off-the-Shelf) equipment,” Jean Lapierre, senior director of software engineering at Matrox Graphics told the 9:30 AM Wednesday morning audience in the Sacramento Room of the Westin Hotel during the SMPTE 2018 Annual Technical Conference & Exhibition. “For me, that basically amounts to using a computer, adding a graphics card and some software, and you can build a playout server. The issue, however, is the SDI infrastructure.”

SDI has a simple structure, Lapierre said, but it is format specific. So upgrading from HD to UHD can mean changing your whole infrastructure.

Enter SMPTE ST 2110, that lets you move whatever signal you want using less expensive IP technology, and do it in both directions. Great, right? Can’t we just replace the SDI card with an IP network card?

If only it were that simple.

Lapierre explained that moving uncompressed video over IP can be challenging.

“What if you have three sources, A, B and C, trying to send their signals through a network switch at the same time?” he asked. “The switch has to buffer, and all those signal packets can overwhelm it.” 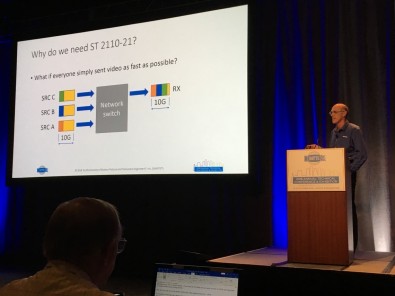 Think of it like the Three Stooges all trying to squeeze through a door at the same time.

So the switch starts to drop packets.

To the rescue comes ST 2110, which is actually a whole suite of standards.

ST 2110-21 introduces the idea of packet pacing,” Lapierre said, “which spreads the IP stream over time. So the switch only has to buffer much less information, letting source A go through while source B waits its turn. A new packet comes through every 4 microseconds.”

“There is a ‘sleep’ function during down time during which the operating system tries to fill the tiny pauses,” Lapierre said. “But for the OS to accomplish this switch takes more than the time allotted.”

He explained that it is theoretically possible to write software involving a timing loop that could compensate for this, but it wastes CPU cycles. A properly designed network card can pass the packets without a timing loop.

A better option is to use ST 2110-7 in hardware to do the job for you with an FPGA (Field-Programmable Gate Array) card.

It’s kind of like a dance, where all the packets are taught the proper steps. And the dancing master is SMPTE ST 2059, which in turn is based on IEEE 1588 Precision Time Protocol (PTP) to provide time-aligned signal generation.

“If everyone is moving at the right rate but doesn’t know what time it is, we need to get them lined up to the PTP clock,” Lapierre explained. “That’s where the PTP Grandmaster Clock comes in which tells the whole software stack the correct time.”

Lapierre used the Master/Slave analogy (I prefer Teacher/Student) but the idea is that the network card’s oscillator communicates with the Grandmaster and keeps everyone in sync, reducing the need for excessive buffering in the network switch.

However, to get enough data onto the dance floor, it is going to require two streams to achieve sufficient bandwidth.

That’s where SMPTE ST 2022-7, or “Seamless Protection Switching of SMPTE ST 2022 IP Datagrams”, comes in. It knows how to send two matching streams of packets to a source over different paths, have the receiver switch automatically between them, and then reconstruct them at the end.

“The software knows how to combine them to create the proper flow,” Lapierre said. 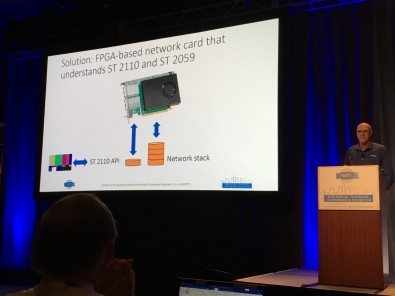 To go with the flow, you have to understand the flow.

Notice he has now used the term “flow” instead of “stream”. It is a word that better describes the way this data is being transmitted.

“What we suggest is using a FPGA network card that you can program to accomplish the task at hand,” he said. “That way you can reconstruct the data you are trying to pass through without overtaxing the CPU.

And since you can build this using COTS equipment, you are doing more with less.”