Recognizing signal polarity with traditional cable was easy because of the color coding. Not so with fiber.

Connecting a fiber system with correct polarity is the key to a successful installation. However, there is no “right” way to approach fiber polarity. Each manufacturer usually provides its own fiber polarity solution. Here’s some guidance.

Polarity of fiber is a challenge for many customers, says Belden. If it doesn’t work, many engineers just unplug the cord at one end and flip transmit and receive. However, with the advent of MPO (Multi-fiber Push On) connectivity in Base-12 (12 fibers) and Base-8 (eight fibers) with simplex, duplex and parallel optics, that is no longer a viable or good way to address the issue. 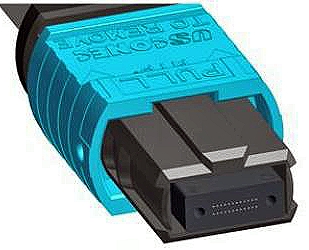 A Multi-fiber Push On (MPO) connector.

Polarity in its most basic form is making sure that transmit talks to receive (a simple analogy: the mouth always talks to the ear). It sounds simple, but failure to understand polarity has often led to problems.

As fiber becomes the media of choice for high-speed data transport, the number of fibers (and connections) is increasing, making apathy toward understanding polarity detrimental to the success of system installation.

These days, Belden said, life is more complex for fiber. Solutions or methods in TIA (Telecommunications Industry Association) standards terminology include varied components with similar labels (such as Type A, Type B and Type C) that can be interpreted in different ways.

The reason it’s so complicated has to do with how all of these components interact. There are issues of general fiber polarity (straight/flipped/crossed/other), gender (male/female), orientation (KeyUp/KeyUp or KeyUp/KeyDown) and end-face alignment (straight or angled). There is also pinning (in the case of MPOs, which are identical except for how the alignment pins are set). All of these factors impact polarity.

Here’s how to achieve the correct fiber polarity in a simple, repeatable and flexible way. In a method established by Belden, there are four basic rules that will allow users to construct both simple and complex channels using a series of common components and a unified strategy. 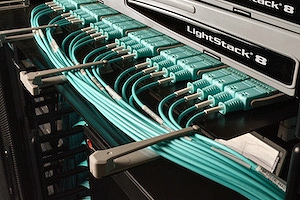 The rules, as written for Base-12, are that all patch cords and trunk cables should be Type B. See Figure 1. If the patch cord has an MPO connector, it must be female-female. All trunks are male-male. If the user has to extend a trunk, use a male-female Type A trunk extender.

If the installer is converting MPO trunks into a duplex environment, use Type A cassettes/hydras at each end. See Figure 2. To ensure that port mapping is correct, a Type A cassette is used at one end and a Type A alternate (to map ports correctly) is used at the other. If the user wants to use a hydra to pre-wire the switch in a traditional harness-type orientation, use a Type A hydra assembly to connect to the switch.

When installing Type A and Type A alternate components, always leave the Type A highest in the network hierarchy. Make sure that, when using OS2 connectivity, any duplex assemblies align from an end-face geometry (i.e. straight or angled polished). If this is not done, damage can occur and your system will not work. This only applies to duplex connectors. All OS2 MPO connectors are APC (Angled Physical Contact connector), so there is no mismatch possible.

Figure 1. A fiber Type B connection diagram. Click to enlarge.

When using Base-8, also sometimes referred to as SR4 (because this is the application it was originally written for), just use SR4 components at each end that requires it (instead of Type A).

If desired, Base-8 trunks can also be used to connect Base-8 components instead of a Base-12 trunk. The use of Base-12 trunks (even for SR4-type applications) should be considered. This reduces operational risk to the facility and lowers the variance in the number of components.

Those, Belden says, are the four basic rules. No special tricks or strange, proprietary components are required. Users will never have to stock both straight (Type A) and flipped (Type B) duplex patch cords again. More importantly, they will be certain each time they plug something in that transmit will actually be talking to receive. 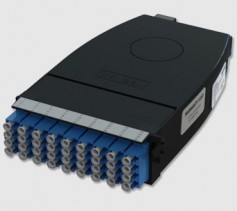 A user may ask about MPO connectors that are gender changing, polarity reversing or orientation flipping, thinking that they’re a “magic bullet” for polarity issues. See Figure 3. They are not. If one follows the four basic rules, these will never be needed.

Such connectors pose a significant operational risk because users have to verify each of those issues at both ends of the fiber cable each time they are used. Failure to do so will risk (at best) a network that doesn’t work, or (at worst) damage to expensive infrastructure equipment.

By utilizing the principles and rules listed above, Belden said users can address the fiber-configuration requirements of the overwhelming majority of applications.