In this series of articles, we will explain broadcasting for IT engineers. Television is an illusion, there are no moving pictures and todays broadcast formats are heavily dependent on decisions engineers made in the 1930’s and 1940’s, and in this article, we look at how color is represented.

In 1913, the International Commission on Illumination (CIE) was founded to provide a forum to promote the exchange of ideas and information to set standards for all things relating to light.

Experiments conducted by William David Wright and John Guild in the 1920’s helped us understand how color is interpreted by the HVS. Wright and Guild found that by shining three lamps of red, green and blue onto a screen, an observer could vary their intensity to match the color of a test color on an adjacent screen.

These tests were used to further understand the concept of color temperature and how we perceive color. And later, Wright and Guild demonstrated we could represent most colors using a mixture of red, green and blue colors. 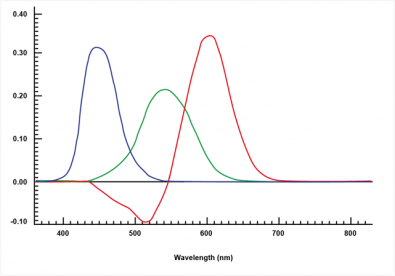 Diagram 1 – Results of the Wright-Guild experiments show the distinctive red, green and blue peaks of the human visual system.

Quite often, hints to this color system can be found in magazines, somewhere on the inside spine or edge of the back page you will see small squares of the colors yellow, magenta, cyan and black, or the letters CMYK for each of the colors – K is used to represent black so as not to mix the “b” with blue, and each one of these is added to the page during the printing process so the printer knows all the colors have been printed correctly.

Computer screens and television monitors work in an analogous manner, both use small dots of red, green and blue light sources to provide the appropriate mix for each individual pixel. In traditional cathode ray tube (CRT) devices, the light sources were phosphors that emitted a specific color when energized with the electron beam from inside the CRT. The brightness of each of the red, green and blue phosphors was proportional to the number of electrons hitting it from the three electron guns.

CRT’s using the flying electron beam system were dominant for many years right up until the late 1980’s. During the 1990’s, plasma screens soon started to appear in homes and used the X-Y matrix system to energize the red, green and blue plasma elements. An array of X and Y wires was placed behind the screen and the junction at each of the X and Y wires uniquely represented a pixel, so their brightness was individually set. And each pixel was further split into a red, green and blue plasma source so the correct color could be represented.

Liquid Crystal Display (LCD) screens soon followed behind plasma displays. Although their method of generating the three primary colors is different, the X-Y matrix is the same. A fluorescent white light source sits behind the screen and LCD elements are varied between on and off, so they allow light to pass through at a color of red green and blue.

Although we now use the X-Y matrix system to activate each of the RGB elements at each pixel, the system still relies on and is backwards compatible to the old line, frame and field system developed in the 1930’s. 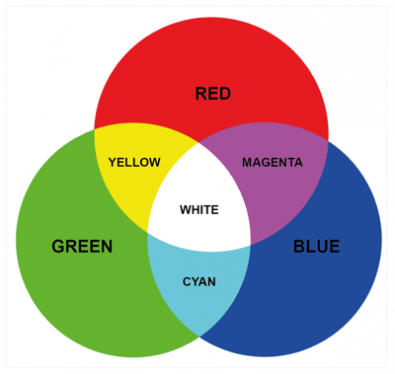 Color cameras work in the opposite way. Using a lens, light is focused onto sensors inside the camera. Each sensor detects either red, green or blue light, and provides the RGB source required in broadcast television systems.

Originally, color cameras used cathode ray tubes like the operation of a display CRT, but much smaller and working in reverse. The current scanning electron beam was determined by how much light fell on the face of the tube sensor, this gave a voltage which was proportional to light intensity for each color.

Consequently, a color television picture consists of three signals, one each for red, green and blue. But transmitting three signals is wasteful of radio frequency bandwidth and very expensive on cabling. If the cables are not identical in length or the signals do not have similar delay, then the red, green and blue images can be seen to separate, resulting in a registration problem.

To maintain the highest possible quality in analog stations, some areas of the broadcast facilities distributed the television picture as individual signals of red, green and blue. However, analog distribution has now been superseded by digital distribution using SDI (serial digital interface), but the RGB legacy is still a vital influence in the television distribution system.

YUV to the Rescue

In analog systems, RGB was generally difficult to work with due to its heavy demands on bandwidth and timing. And to maintain backwards compatibility with black-and-white television sets, a new format was created called YUV. “Y” represents the black-and-white compatible signal and the “U” and “V” represented the color difference signals. YUV will be discussed in greater depth in a later article.

Although the frame and line rates are different in PAL and NTSC, their fundamental operation is very similar, and YUV led the way for the formats. The Y signal forms the black-and-white component, and the U and V in PAL, or I and Q in NTSC forms the color part of the signal. The color components are modulated onto the Y signal using the color subcarrier system as discussed in article Broadcast For IT Part 4 and Broadcast For IT Part 5.

PAL and NTSC Are Not Interchangeable

Decisions on how we represent color in television broadcasting, and computing in general, were made back in the 1960’s. Although HD, 4K and 8K systems no longer use NTSC and PAL coding, they are still based on the RGB system, and are heavily influenced by NTSC and PAL, and they only really differ by how many bits we use to represent each of the RGB signals and how we distribute them.