The goal in world-class powerboat racing is to fly down an open water race course without leaving the surface, faster than anyone else. At this year’s Missouri’s Lake of the Ozarks race, the winner blasted through the finish-line at 244 MPH, setting a new event speed record.

At these high speeds, a 10,000 lb. race boat weighs only a few hundred pounds – just enough to keep the props in the water. If only set-up for the live TV broadcast and streaming video on the Internet of the event were so fast.

KRMS radio in Osage Beach MO produces live, wall-to-wall radio and television coverage of powerboat racing on the Lake of the Ozarks, which all runs 8 hours each day over a weekend. Local FOX TV affiliates carry the live coverage for three hours each day. The entire 16-hour production and overnight replay is carried on local cable and streamed on the Internet via ustream.tv to more than 16,000 viewers.

Streaming set-up used to be something of a dirty job. We used a station laptop, loaded like many station laptops with much more software than we need. Because of this, streaming setup tended to be time-consuming and problematic, and the streaming laptop took valuable real estate space in our cramped temporary control room.

At the latest Shootout race this August, we retired the streaming laptop and used a new Matrox Monarch HD for streaming. We couldn’t have been more pleased. It required virtually no real estate, was simple, powerful and it worked precisely as advertised. It was unboxed and set up with a laptop in about 15 minutes, mostly confirming that the presets were actually preset. The laptop was disconnected and the unit went on to continuously stream live video and audio without a hiccup for 50 hours including overnight replays, with one minor exception that was fixed before the production began.

The original source of the video content for the Monarch HD was the SDI output of a Panasonic AV-HS400A production switcher. The SDI program output was fed to another converter which embedded basic 600 ohm analog mono audio mixed for AM radio, into the SDI video to create a HDMI output for the Monarch HD input. The mono output of the audio mixer was physically bridged to feed the left and right channels for streaming.

Over time, setup for race production has become almost cookie cutter-like, and it nearly always reveals a fresh unexpected technical surprise. As setup was winding down, all gear appeared to be working together as intended. We were about to call it a day when we learned of a minor exception to our success. Someone discovered they couldn’t hear audio from our test content stream on their smartphone. We knew audio was on the stream because we could hear it on our computers and TV monitor, but not on smartphones. 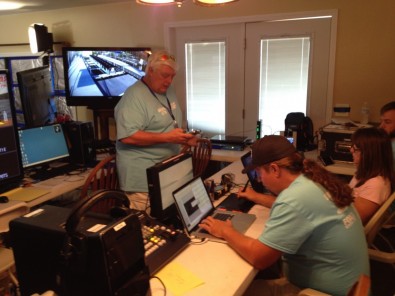 Three engineers with about 100 years of combined broadcasting experience do the setup. Two build and own radio stations. But, an audio problem still caused a bit of head scratching. The engineers all consider themselves audio experts. “Impossible!” said the set-up engineers, “The audio has to be in phase.”

We learned what happens when you lock three seasoned broadcast engineers in a control room plagued by one of the world’s simplest audio technical problems. You get three people who all strongly agree that none of them or their gear could possibly be at fault. About the time we discovered the missing smartphone audio, we got a call from our flagship FOX affiliate, KRBK-TV in Springfield MO, reporting our left and right audio channels were out of phase. After some serious head scratching, more denial and some soul searching, a slightly reluctant phone call was made to Matrox technical support.

The Matrox engineer was friendly, helpful and immune to panic. He confirmed our streaming audio was out of phase. Our perfectly balanced dual channel audio fully cancelled itself in the mono mix. Most smartphones mix stereo to create mono for the internal speaker, which explained the problem. It took some time and harrumphing before accepting the fact that the audio problem was of our own making, and physically rewiring the bridge to correct it. In the meantime, KRBK had already rewired our feed at their end to correct the phase problem. Once we discovered the problem, verified with Matrox that we owned the problem and fixed it, KRBK undid their wiring change and the telecast progressed as planned. 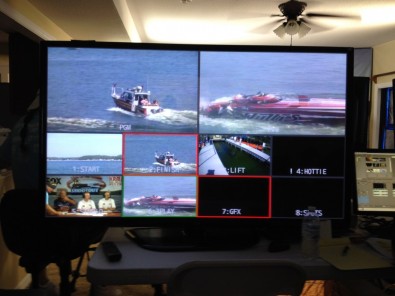 The 2014 Ozark Lake Shootout champion blasted through the finish-line at 244 MPH, setting a new speed record at the event. This boat flipped at high speed, severely damaging the stern as shown in the control room monitor.

The Monarch HD supports sharing its H.264 encoder between streaming and recording so recording quality and upload bandwidth are independent of each other. It also gives users the option of recording high quality H.264 video as MP4 or MOV files. Typical settings might be a master quality file at 25 Mbps and a simultaneous stream at a bit rate of 5 Mbps. The unit is designed to stream at bitrates up to 20 Mbps or record at bitrates as high as 30 Mbps. The Shootout streamed flawlessly at 5Mbps.

We were using a NewTek 3Play for replays and highlights and a laptop for master program recording, as we had in the past. About two hours into the first race day, a spectacular, but unfortunately fatal, accident occurred unexpectedly on the race course. A brand new race boat went airborne at about 170 MPH and crashed on the water upside down. The crash and rescue were surreal and sudden national news. From that moment, it didn’t take long to realize we should have also used the Monarch HD as a master recorder. A standard MOV file would have proven quite helpful. Lots of people wanted video from the accident and subsequent rescue. It would have been much easier to record, recover and share files from a USB drive than the ragged legacy laptop we used. Lesson learned.

Would of, could of and should of are not words generally associated with successful productions. But, reality demonstrates that outside broadcasting almost always includes technical surprises, some tiny, others potentially catastrophic. The best approach to live outside production success is to use the right gear, prepare for the worst possible scenarios, plan for the best production ever and never say never.