One of the most useful technological advancements for conducting interviews is Skype. Call anywhere in the world and — in most cases — get a clean audio and video feed that can be used on-the-air, in a documentary or on a podcast. A frequent question is how does one record a Skype call.

Let’s start by noting there are expensive, professional ways to deal with Skype calls and there methods that are almost free. Your budget and needs will determine which method to choose.

On the high-end, Skype TX for Broadcasting is a system that gives users the tools to control, adjust and preview multiple Skype calls in a workflow. Companies including Quicklink, NewTek and Riedel sell hardware interfaces that integrate broadcast systems with the Skype TX system. These can be controlled from the Skype TX Control software, that provides control over calls. The control software is available only for Windows PCs. 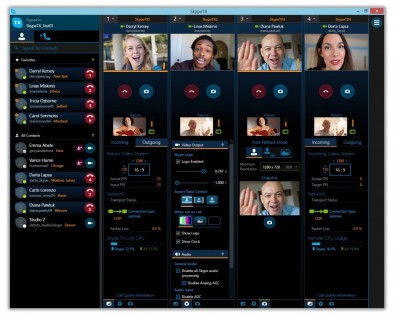 These professional systems are great for large broadcast studios or major shows handling a lot of Skype calls at once. But on a far simpler lever is software that allows any user of a Macintosh or PC to record the audio and/or video of any Skype call. In many cases, the best app allows the audio tracks to be split for easier post-production editing. The quality can be excellent.

For the Macintosh platform, Ecamm’s Call Recorder ($39.95) is considered one of the best apps available. It makes real time high definition video and/or audio recordings and allows them to be shown in a side-by-side or split-screen mode.

When the interviews is completed, Call Recorder has a multi-track editing feature for clean-up. After post, the app can convert the call into MP3 files for podcasting or internet-ready presentations for YouTube and Vimeo. (There is also a Call Recorder for FaceTime.) 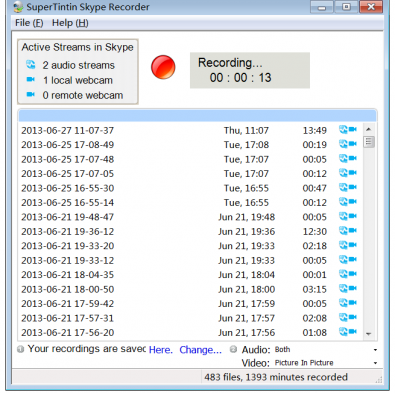 For the PC, SuperTintin ($29.95) is often recommended. It features picture-in-picture and side-by-side video and can record each of the four media streams separately (two video, two audio) or as one combined video. Once the user hits record for a Skype interview, the app takes over. When finished, it saves the media file.

Another method for recording Skype calls is called mix-minus. It requires more more gear and a higher level of technical know-how than just using the apps. However, it allows users to mix a show in real time, with in-studio and remote guests and offers the ability to patch in external audio sources.

To avoid the problem of the Skype guest hearing an echo of him or herself due to latency, it’s necessary to send them the entire mix, “minus” the Skype channel. That’s where the name comes from.

We’ll also need a mixer with at least one auxiliary output for creating a separate mix for the remote guest. If separate tracks for editing and mixing are desired, it should also have direct outputs on each track. (Inserts can be used as direct-outs).

To continue with the example, we’ll choose a Mackie ProFX12v2 that can handle two in-house guests on microphones, as well as one Skype caller and one audio player for sound effects. The mixer offers four inserts that can be used as direct outputs for recording.

Let’s say our hypothetical show has two in-studio guests on channels one and two, each using a Shure SM7B microphone. The headphone outputs of the Skype computer is connected to inputs three and four. A ⅛-inch TRS cable with a ¼-inch adapter from one of the aux outputs is run into the mic jack of the Skype computer.

Now we can hear the mix including the Skype caller on the studio end, while the Skype caller hears the mix minus themselves on their end. This avoids the echo caused by latency that would occur otherwise.

Regardless of the method used, occasional unexplained glitches happen or you may lose the connection. That, folks, is the internet in 2018. Live with it. When it happens, just re-dial and pick-up the interview from before where the problem occurred. You can edit out the problem later. Remember that the Skype system is free and the software is  cheap. Don’t expect perfection.

Also a major issue with VoIP technology, which Skype uses, are dropouts and digital artifacts in the audio. This depends on your how solid your internet connection is. It can widely vary.

A workaround is to record guests locally and have the remote guest call in on Skype using their mobile phone, while simultaneously recording themselves using a recording app or a computer setup with a USB mic and simple DAW like Audacity or GarageBand.

The guest would then send their audio file after the fact and the poor Skype recording could be replaced. This may or not always be feasible, but it is a good back-up strategy if it works.

Just like the internet, Skype is still a hit or miss technology. Sometimes it works brilliantly and sometimes it doesn’t work at all. But as time goes by, it is improving and becoming more reliable. When it works, it is a powerful tool that anyone on any size budget can harness for remote interviews.