Having spent much time and energy exploring AES67 (see our recent 3-part series, “Your practical guide to AES67, Parts 1-3”), we’d now like to turn our attention to AES70 – what is it, how does it relate to AES67 and why do we need it?

First, let’s explain what the AES70 standard encompasses. Essentially, AES70 is to control and monitoring what AES67 is to audio transport: while AES67 is the industry standard that defines the requirements for high performance Audio-over-IP interoperability, AES70 is an open standard for control and connection management of professional audio and AV media network devices. From a single device and controller to networks with almost any number of devices and multiple controllers, AES70 provides for powerful, scalable, high speed, low cost, robust system control and monitoring of devices from different manufacturers. It may be used in conjunction with any available transport protocol (RAVENNA, Dante, AVB etc.)

AES70 or OCA? I keep hearing both terms, but I don’t know the difference…

OCA, or Open Control Architecture, is an architecture for connection management and control of media devices over digital networks. In much the same way that the AES developed AES67 in order to provide a set of common standards to help integrators achieve interoperability in audio networks, the AES recognised that a similar initiative would be helpful to manage connection management, control and monitoring.

In most applications, OCA and AES70 terms may be considered as interchangeable, and are often used as such.

Hence, AES70, which was published in 2015, is the open public standard technical specification of OCA. It was built on the public OCA 1.3 specification, and technical differences between OCA and AES70 are minor and few. Thus, to all intents and purposes, the two terms may be considered as interchangeable, and are often used as such. However, for the purposes of this article, we are going to stick with AES70.

Is there a relationship between AES67 and AES70?

Not really, other than the fact that they are both ratified by the AES. However, the fact that both are open standards makes the combination of the two very interesting. AES70 can be used alongside any network protocol – Dante, RAVENNA etc. and can provide control and monitoring of devices across your network. However, the important element is that AES70 can also be used for connection management, so beyond controlling actual equipment settings such as EQ, it can be used to control the network connections themselves. 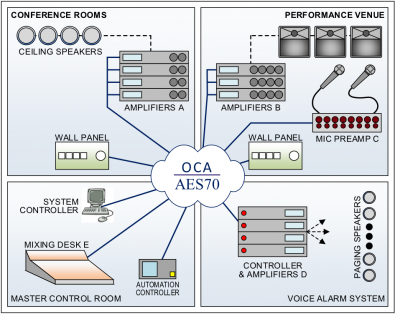 AES70 and OCA solutions can be combined in the same network, resulting in a wide variety of solution options.

AES70 can provide connection management for any protocol, but with AES67 it becomes more useful. If you have one device using RAVENNA and another using Dante, then AES70 could be used to put both those devices into AES67 mode and set up connections between them. AES67 was deliberately designed to be a little ‘dumb’ for maximum compatibility. AES70 can provide the intelligence that is missing.

So, whilst AES67 allows non-compatible devices (in other words, devices that use different audio transport protocols) to exchange audio streams and become part of a fully interoperable, high performance AoIP network, AES70 deals with the next step in the networking chain, which is control, and allows the control and monitoring of all parameters of a network device including the creation and deletion of signal paths, access control, control of processing and even firmware updates. This control data can be delivered over wired Ethernet or Wi-Fi.

AES70 is, therefore, a powerful tool when used in conjunction with AES67, but the relationship is by no means exclusive. As we’ve already seen, AES70 doesn’t provide a means of transporting audio; that can be achieved using a host network like RAVENNA, Dante, or (if you must) AVB. The big advantage of using AES70 with AES67 (via Dante/RAVENNA etc.) is that it provides the missing features needed to turn the transport protocol of AES67 into a complete AoIP solution.

AES70 is an open, license-free standard available to anyone. It is capable of working effectively with all kinds of devices from multiple manufacturers to provide fully interoperable multivendor networks.

It is a control protocol standard only and doesn’t define the programming design or user interfaces of devices or controllers, and nor does it provide audio transport, but it can be used in conjunction with AES67 or any other available transport protocol (RAVENNA, Dante, AVB etc.)

AES70 is both modular and scalable and can be used in all sizes of devices, from small wall controllers to large audio processors and mixers, and all sizes of network from the simplest to the most complex. It can also be deployed in subsets. For example, some products might only use the connection management features while others deploy just the audio processing features. Other still may use the entire feature set.

At the recent AES show in NYC, the OCA Alliance hosted a series of hands-on demos focused on the practical implementation of AES70. “How to make an AES70 device,” and “How to make an AES70 Controller,” offered step-by-step instruction and working demonstrations on how to build fully functional AES70 implementations utilizing the AES70 standard for controlling and connecting devices and AES67 for audio streaming over networks.

The OCA Alliance is a non-profit trade association of manufacturers dedicated to promoting the acceptance of AES70 (or OCA) as the de facto standard for media networking system control in professional applications.

OK, so I get what it is and why it’s useful – so how do I implement it into my products and start using it in the real world?

AES70 is just one part of a whole series of control options for audio so there’s still a lot more to cover, but we’ll do that in the next installment.

Links to the three-part instalment of AES67 tutorial articles mentioned above can be found at the following links. Combined, these articles represent an excellent companion to the AES70 standard and its capabilities, all of which will be covered in this new series.

Your Practical Guide To AES67- Part 1

Your Practical Guide to AES67—Part 2

Your Practical Guide to AES67—Part 3 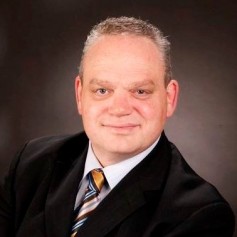