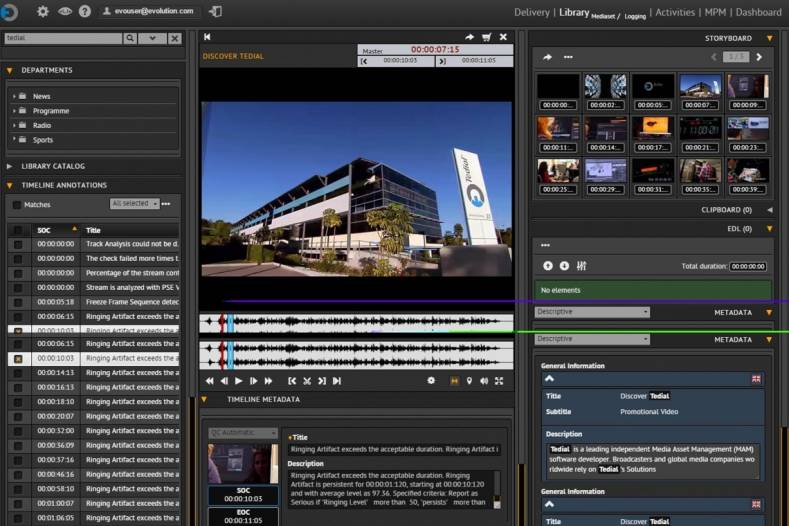 Broadcasters have finally been able to harmonize the Master Exchange Format (MXF) with the Digital Cinema Distribution format (DCP) and other international media exchange formats such as Digital Production Partnership (DPP). The result is a new specification called the Interoperable Master Format (IMF).

Business models for broadcasters are not what they used to be! Yesterday’s broadcasters are today’s media companies or content owners, and their success depends on uncovering new opportunities and outlets for programming, and maximizing distribution. But supporting all these new delivery channels is both labor intensive and expensive.

For decades, industry standards committees have focused on developing a functional interoperability platform, one able to manage the multiple other formats and standards that were created. The result is called Interoperable Master Format (IMF). IMF is a distribution media format built on tested and deployed standards that are further constrained to ensure media interoperability.

Major producers and distributors such as Sony Pictures Entertainment and Netflix have already standardized on IMF, pushing their suppliers to meet the new requirements for interchangeable content. The format simplifies content distribution because it makes media interoperable and reduces ambiguity. IMF methodologies allow companies adopting them measurable cost reductions in storage and device operations, as a title with all the related versions can be easily represented by logical descriptions rather than physical versions, reducing storage and processing requirements.

What is a IMF-MAM workflow?

To maximize these advantages, systems need to be able to offer an end-to-end IMF workflow that leverages the IMF specifications without overloading processes with internal conversions or limitations in the content management structure. New version generation needs to be managed efficiently to assure that no media is replicated until required. Different versions should merely reference the media masters in unique compositions that include the additional elements needed for new material.

MAM content delivery needs to fit seamlessly into an IMF specification so that the delivered package takes advantages of these “logical versions.” Add to this a flexible supporting mechanism to automatically select the proper components to deliver (video, audio subtitles, attachments, XML, etc.), in the correct order and with the proper media transformations required for a particular distribution reception site. To maximize the monetization of the media, a modern MAM needs to be able to support:

A MAM solution that best controls the IMF methodologies understands that the asset manager does not need to archive an intact IMF package as received. IMF is the vehicle that delivers and interprets different versions of that media asset. To maximize the benefits of these efficiencies, IMF end-to-end workflows must fully support IMF packages at all levels of the asset management tools and workflows. A word of caution: beware of ‘IMF-ish’ solutions that store and manage the media using “IMF labels”, but don’t actually process the assets to maximize the advantages of this new content management and exchange methodology.

IMF compliant MAMs require a title concentric design, where a title encompasses much more than it has in the past. Support for multiple Master versions co-existing within the same title is a key requirement of IMF compliant MAMs.

New version workflows depending on the company’s business rules, can automatically manage slate insertion, pre/mid/post rolls, and any formatting of the video content including bars, audio tones, blacks, etc. that might be needed to support client destinations, with or without an offline editor. A key feature of an IMF compliant MAM is the ability to manage new version assembly or control the import of the EDL from an editor to identify new fragments and create a logical asset referencing the Master in the MAM.

A word of caution: beware of ‘IMF-ish’ solutions that store and manage the media using “IMF labels”, but don’t actually process the assets to maximize the advantages of this new content management and exchange methodology.

To implement a true end-to-end IMF workflow, the MAM needs to be able to handle the relationships between different versions of the same title to represent a product that is created incrementally through the ingest of the IMF packages, all their components and any supplemental packages that are received.

IMF compliant MAMs significantly reduce storage requirements by maximizing the use of logical versions. In this case, any particular combination is not actually assembled until it is required for distribution and may not be stored as a new file because all its components are on hand and the MAM has the recipe.

And by employing the IMF concept of Output Play Lists (OPLs) as a distribution definition tool, IMF compliant workflow systems can manage thousands of output versions with a single workflow. Most MAM systems can “route” an imported IMF package through the software workflows and deliver them in the same compliant package as they were received. Yet, this simple workflow is not enough for a true end-to-end IMF workflow.

A true MAM solution must:

Having a true IMF end-to-end workflow maximizes the advantages of the standard for all business levels. Such a workflow affects system input/output, and puts serious demands on the internal MAM content structure to manage the content described in IMF packages.

An IMF compliant MAM system must be capable of generating any new IMF packages for distribution, even those that were never received. At the same time, the system needs to archive media in the most efficient manner, embracing the IMF philosophy. A real IMF end-to-end workflow inherently allows broad flexibility to support unique implementations, as well as scalability to meet any media company’s requirements or business rules.

Julián Fernández-Campón is the Director, Engineering Support at Tedial, S.L. Julián has a Computer Science Engineering degree from the Higher Technical School of Computer Engineering - University of Málaga, specializing in Telecommunications and Robotics, and is distinguished with first-class honors.