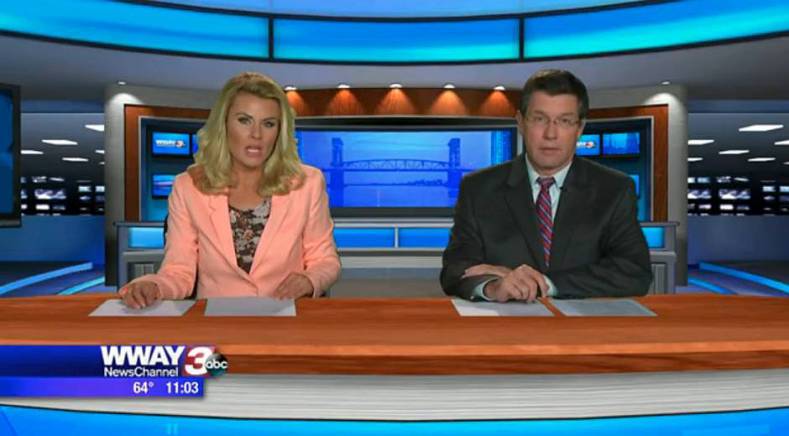 Virtual set technology arrived ahead of its time. When the first systems for broadcasters came on the scene about 15 years ago, they got a very bad rap. So bad, the name was virtually erased from the broadcast vocabulary for over a decade.

“Early on everyone was going virtual and they all bombed. CBS tried it in New York. Other stations did it. It was too expensive, too unwieldy, too cartoony, nobody liked it —in fact, everybody hated it — and they all scrapped it,” said Mack McLaughlin, CEO and creative director of FX Design Group, the broadcast set design company based in Ocoee, Florida. “For the next ten years, nobody talked about virtual at all.”

Virtual set technology, which evolved from the traditional "chromakey" technique, debuted in the form of a “technology presentation” by Ultimatte Corp. and IMP GmbH at NAB in 1994. A year later, the technology was successfully used in a production involving European music programming. 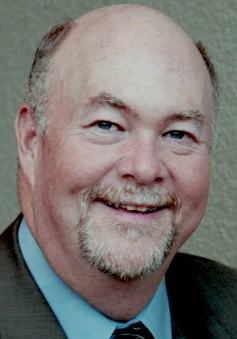 But for routine broadcast applications, early virtual studio systems were problematic. They cost nearly $1 million, were very complex to use, were difficult for on-air performers to navigate and didn’t look very genuine on the air — having jaggy edges and other messy artifacts.

To work flawlessly, a virtual set for broadcast has to allow the real-time combination of people or other real objects and computer generated environments and objects in a seamless manner. A real camera has to move in 3D space, while the image of the virtual camera is being rendered in real-time from the same perspective. The virtual scene has to adapt at any time to the camera settings (zoom, pan, angle, traveling, etc.). This is what differentiates a virtual studio from the traditional technique of chromakey. 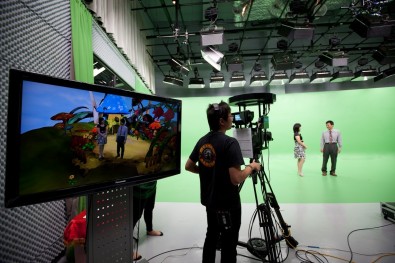 The complexity of a 3D virtual studio causes some broadcasters to hesitate. The cost, however, is attractive.

In motion picture film production, scenes are edited. In television, no post production is needed because the virtual studio works in real-time. A set designer, working as a graphic artist with 3D software, has to create a virtual set for the studio.

In the past few years, a combination of events have collided to propel virtual sets back into the limelight. First, the economic collapse of 2008 put huge economic pressure on broadcasters to cut operating costs and that hasn’t changed. At the same time, changes in the business of broadcasting has created the need for additional channels of programming with different sets.

Simultaneously, the cost of computing hardware and software has fallen dramatically. Virtual set technology tumbled in cost as well. And finally, a younger generation has come of age and are more open to accepting virtual sets than older viewers.

Billy Stratton, chief engineer at WWAY-TV, the ABC affiliate in Wilmington, NC, pushed his station to adopt a virtual studio in 2013. It has proven so successful that owner Morris Network is now converting all of its 14 stations across the South to virtual set technology.

“Some stations have been afraid of virtual reality because it doesn’t look real,” said Stratton. “But I think with the younger generation now and the fact video games have been around so long that people are accepting it more and are not really worried about how real it looks. The graphics have come a long way over the last few years. Within the next ten years, I’d be surprised if virtual reality is not in every station across the country.”

David Jorba, executive vice president of operations at Vizrt Americas says today's virtual set technology is simpler and much easier to use than previous designs.

“The hardware keeps getting cheaper and the solutions are getting more and more simple to use,” said David Jorba, executive vice president of operations at Vizrt Americas. “Virtual studio systems are now easier to set-up, there is much better integration with tracking systems and they are far more accurate.”

It’s the falling prices, though, that are really driving the market, Jorba said. “Economics are driving more and more stations to virtual sets. Three years ago, we didn’t have any virtual sets in local stations. Today, we have ten or so and its growing fast. Some station groups have adopted the technology.”

Jorba said some Vizrt customers can’t afford camera tracking systems, but still use virtual studios and are manually moving the cameras within the system. They use the “virtual camera” feature in the software to control the camera.

“Stations need to cut their budgets. But in addition to doing newscasts, some local stations are also trying to create entertainment shows to generate their own content,” said Jorba. “Since that requires additional sets, it can become very pricey. So they have the need to produce more with less money.”

In 2012, FX Design Group partnered with Frank N. Magid and Associates to do research on the state of virtual studios. Two-thirds of the 18 to 34 year-old-viewers chose the 3D digital set over real ones, while more than half of all women chose the virtual set for sports. The study gave FX Design the information it needed to see the market was viable. After that, it partnered with Hybrid, a firm that makes virtual studios and robotic systems.

“We found that when virtual sets were compared to real sets, the audience often picked the virtual sets as real,” said McLaughlin of FX Design. “They actually trusted anchors more on the digital set than the real set.”

When his company creates a virtual set, McLaughlin said, the designers actually gain features rather than give them up. “We gain those things we want in a design but could never afford to do in a real set. Now we can do it in virtual. Our philosophy around here is this is going to be the golden age of broadcast set design because people have been so limited, especially the past five years.

“Budgets have shrunk on hard sets from what they were in the late 1990s. Sets have changed and gotten smaller, materials cost more, shipping costs more. Now, with virtual, there’s no limit to the number of elements you can have. There’s no limit to the type of technology you can have in your set. If you want a three-foot wide by twenty-foot high video array, you can have it. If you went out to buy the real thing, the cost would be between three or four hundred thousand dollars.” 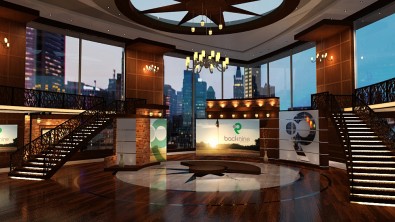 The Back9Network, a golf lifestyle television network based in Hartford, Connecticut, uses a virtual set for much of its production.

FX Design and Hybrid now work together on virtual studio jobs. FX Design does set designs for clients with Hybrid’s software and computer products. The two companies recently joined to build virtual sets for the new Back9Network, a golf lifestyle television network based in Hartford, Connecticut, that went on the air in October, 2014.

“Back9 came to us initially for a hard set design,” McLaughlin said. “About eight months ago, during the discussions, they outlined requirements that made a good argument for virtual sets. We took our designs and modified them for virtual sets. They just launched with two virtual sets and one hard set. Eventually, they’ll probably expand to half a dozen virtual sets.”

As for broadcasters still uncertain or concerned about taking the leap into virtual sets, McLaughlin recommends a hybrid solution to try the new technology.

“We tell clients to at least get started and get their feet wet. Do the anchor and weather set real. But get a small virtual reality system and do all the franchise pieces on a key wall as virtual sets,” he said. “They’ll either like it or hate it. If they like it, they’ll say I don’t need a bigger hard set, just give me a bigger key set and better designs and I’ll continue to work in virtual.”