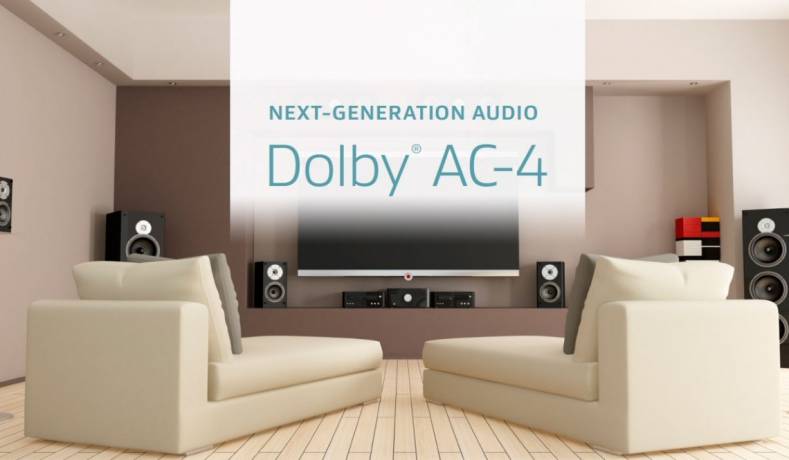 After more than two years of technology development, subcommittee discussions and field tests, on February 23rd the Advanced Television Systems Committee (ATSC) recommended that North American broadcasters choosing to migrate to the next-generation ATSC 3.0 specification use the Dolby AC-4 codec for OTA transmission. The Dolby system was up against a group of companies that have developed a competing system known as MPEG-H Audio

In February the FCC voted unanimously to allow American broadcasters to voluntarily adopt new ATSC 3.0 standards for next-generation TV services. Assuming the FCC rules do not mandate a specific audio system, a U.S. broadcaster could use either AC-4 or MPEG-H, but the later may not be receivable on some consumer devices sold in North America. MPEG-H has been designated for use in South Korea by that country’s Telecommunications Technology Association (TTA) and will be used for the upcoming 2018 Summer Olympics, which will be distributed terrestrially in the A/300 ATSC 3.0 System Candidate Standard system.

In May of 2016 the North American Broadcasters Association (NABA) officially recommended Dolby Labs' AC-4 as the preferred audio codec for OTA broadcast. This means broadcast organizations in North America have selected A/342, Part 2 (AC-4) and TTA has selected A/342, Part 3 (MPEG-H) for use in South Korea. It remains unknown as to the effect on world markets this differentiation may have.

Both AC-4 and MPEG-H were thought to have technical merit. Permitting the use of either technology provides different regions with the ability to choose the system that best fits their needs.

But, for  broadcasters in North America, Dolby’s AC-4 is now the format they will use to compress and send audio content from a myriad of sources.

For the industry, it took more than four years to get to this point. “There were a lot of moving parts and discussion, “ said Jeff Riedmiller, vice president of the Sound Group in the Office Of The CTO at Dolby. “It’s a fundamental change, replacing traditional broadcasting methods with a state-of-the-art system that will make OTA broadcasters more competitive in today’s highly fractured landscape. Given the monumental effort that the ATSC and its members went through to develop this next-generation systems, I’m not surprised it too this long.”

The goal with either audio codec is to significantly improve upon the capabilities of the current multi-channel broadcast digital television audio system and provide consumers with a more compelling, personalized and immersive experience. ATSC 3.0 audio personalization will include enhancements to the control of dialog, use of alternate audio tracks and mixing of assistive audio services, other-language dialog, special commentary, and music and effects.

ATSC 3.0 audio also will support both the normalization of content loudness and contouring of dynamic range, based on the specific capabilities of a user’s fixed or mobile devices and their unique sound environments.

Immersive audio functionality envelops the listener with precise sound source localization in azimuth, elevation and distance. Such features can be supported even without the requirement for a large number of physical speakers.

Dolby AC-4 can carry conventional channel-based soundtracks and object-based mixes. Whatever the source type, the decoder renders and optimizes the soundtrack to suit the playback device. Click to enlarge.

Dolby said its AC-4 audio compression system provides a practical, scalable and flexible set of tools to enable the efficient production, distribution and delivery of consumer broadcast experiences for all audiences today and in the future. This solution spans content creation, distribution and consumer delivery.

“The will of the industry supported Dolby AC-4,” said Riedmiller. “Broadcasters have a lot of history with Dolby and there’s a lot of trust there. We have a lot to bring to the entire chain, from Hollywood to the home. Everything from creation, post, distribution all the way to playback (mobile, living room, Laptop, etc.)”

To install the system, stations will have to buy a new video encoder with Dolby AC-4 software. Many manufacturers, including Elemental Technologies, Ericsson and Harmonic, are expected to show prototypes at the upcoming NAB show.

Stations can send one AC-4 stream that contains an immersive experience capable of being personalized. Viewers can pick specific announcers or different camera views in some live events. A Dolby software-based decoder is smart enough to adapt to the specific device it is bring received on. And this all can be accomplished with less bandwidth. In AC-3, stations could send multichannel 5.1 encoded content at 384 kbps. In AC-4 they can now deliver a great 5.1 experience at less than 100 kbps. That bandwidth savings can be used for other things.

“It’s a state of the art codec for a next-generation broadcast system,” Riedmiller said. Look for the next generation of 4KTVs to include a Dolby AC-4 decoder built-in. Riedmiller said major set makers like LG Electronics, Samsung, and Sony have all expressed interest in Dolby AC-4. To this end, at the 2017 CES Show in January, Dolby’s exhibit booth featured a 55-inch Sony TV with a built-in AC-4 decoder and user interface to show how consumers would interact with ATSC 3.0’s audio features. LG Electronics also showed a 65-inch class LG LED TV with an embedded ATSC 3.0 tuner, this one using MPEG-H to display HDR 4K/UHD programming as well as ATSC 3.0’s electronic service guide capabilities.

South Korean broadcasters were to begin real-world ATSC 3.0 broadcasts earlier this year, using the MPEG-H audio system developed by the Fraunhofer Institute, Technicolor and Qualcomm. Using a Rohde & Schwarz transmitter, Korean broadcaster SBS is preparing for the upcoming 2018 Olympic Games. It’s clear how many ATSC 3.0-comaptible TV sets are in the market at this time.

At the CES Show Fraunhofer showed its MPEG-H Audio technologies and products that will be available for the launch of South Korea’s terrestrial 4K TV broadcast service.

Dolby’s AC-4 codec has been tested at RTVE, in Spain, TVF, in France and KQED, the PBS member station in San Francisco. Riedmiller said everyone involved has reported positive results.

The issue now is how long these new codecs will get in the hands (and living rooms) of consumers both in North America and abroad. Many predict a situation, much like today, in which many broadcasters will continue to send out stereo while a few will distribute AC-4 or MPEG-H-encoded content. The A/300 ATSC 3.0 System Candidate Standard system makes accommodations for this.

“There are a few test stations already on the air in the U.S,” said ATSC’s president, Mark Richer. “I expect some additional stations will start transmission for testing and field trials in 2017. In 2018 we may see some stations start service.”

Look for live demonstrations of the new audio technology at the upcoming PBS Technical Conference, held two days prior to the 2017 NAB Show. The technologies will be highlighted in both the Dolby and Fraunhofer booths, as well in companys' partner booths and in the ATSC Pavilion.

“Deployment will take time,” said Dolby’s Riedmiller. “We’re here to serve the industry in whatever way we can. We’re going to follow their lead. A lot of people are eager to start playing with this stuff. Over this year we’ll begin to learn more. We’re excited to be the recommended audio system for North American broadcasters.