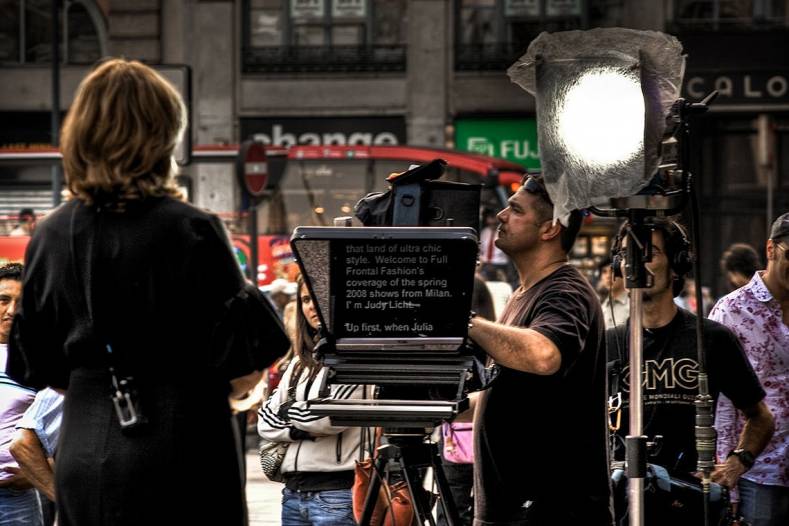 Prompting systems for outdoor use, like that shown above, require much brighter monitors than do studio configurations because of the likeli

Teleprompters go back to the earliest days of television. The idea came from an actor named Fred Barton Jr. who conceived the teleprompter as a means of helping television performers who had to memorize long dramatic scripts in a short amount of time.

Barton, along with Hubert Schlafly and Irving Berlin Kahn, founded the TelePrompTer Corp. in 1950. That same year, Schlafly designed and built the first teleprompter. It was a paper-based mechanical device, operated by a hidden technician, located near the camera.

The script — in one-inch-sized letters — was printed by a special electric typewriter on a paper scroll, which was advanced manually as the performer read. The first prompters rented for the then considerable sum of $30 an hour.

Paper-based prompters had a basic problem, though. The performers had to break eye contact with the camera to look at the script on the prompter.

In 1952, former President Herbert Hoover used a Schlafly-designed speech prompter to address the Republican National Convention in Chicago. Prompters have been used presidents ever since. President Obama uses a modern variation of the prompter designed for public speakers — though it works on the same theory as a broadcast prompter.

Jess Oppenheimer, a writer, producer and director on the I Love Lucy TV show, also developed a paper roll prompting system to help actors. Oppenheimer took out a patent on his system. He licensed the patent to the teleprompting company Autocue in the United Kingdom and QTV in the United States in 1955. Both companies started by renting their prompting equipment to studios. Look closely and on the left you'll see a prompting system used by Lyndon Johnson as he was signing the Civil Rights Act of 1964.

Oppenheimer’s paper roll system survived until 1969, when Autocue and QTV introduced the first closed-circuit prompter. This used a closed-circuit video camera system to shoot a scrolling paper script. The image was displayed on a monitor attached to the front of the camera.

Use of a two-way mirror system allowed the script’s image to be reflected onto a sheet of glass in front of the camera lens. For the first time, the performers were able to read their lines straight from the script while looking directly into the camera.

This was a major breakthrough in prompting. The script was not visible to the camera lens. The actors no longer lost eye contact. Though there would be many refinements in the future, this basic through-the-lens design is still the way most prompting systems operate to this day.

In the 1970s, both Autocue and QTV started selling hardware in addition to maintaining their rental operations. In 1984, QTV acquired Autocue and retained the two brands in their respective regions.

Prompting, of course, didn’t stand still. Digital prompting came with the computing age — leading to the development of scriptwriting and running order packages. The first personal computer-based teleprompter, Compu Prompt, appeared in 1982. Computer-driven prompting is now used by newsrooms, conferences, sitcoms, major drama productions and many other applications throughout the world.

In 1994, the Autocue Group introduced the first flat screen prompters, replacing fluorescent-based displays. This made prompters more compact and portable, and allowed them to be used on even the smallest portable video cameras. The falling prices of flat panel displays also made them considerably cheaper to manufacture.

Today, modern prompters work by reflecting the flat panel’s on-screen text on a partially silvered mirror placed directly in front of the camera lens. Eye contact is maintained by performers and viewers get the illusion of the speaker having memorized everything they are saying. Though the prompter still works in that basic way, most of the recent advancements have come with script processing and networking of prompter systems.

Computer networking has added many new prompter features including ingest, index and processing stories from news agency wires through newsroom systems. Autocue introduced the first IP-based prompting system, QMaster/QBox, which allows prompting over a network over any distance.

In 2013, the workflow division at Autocue/QTV underwent a management buyout and a new company called aQ Broadcast was formed. Significantly expanded, it now offers a single solution for newsroom, scripting, automation, media management, video servers, camera support, lighting and broadcast monitors — all with direct integration to the Autocue teleprompter line.

Today, aQ Broadcast’s customers include traditional broadcasters like Bloomberg, CNN, BBC, MTV, TF1, MBC and Doordarshan, as well as government, corporate and academic institutions such as the White House, Oman Ministry of Information, Bank of America, and Arkansas State, Lincoln and Salford universities. 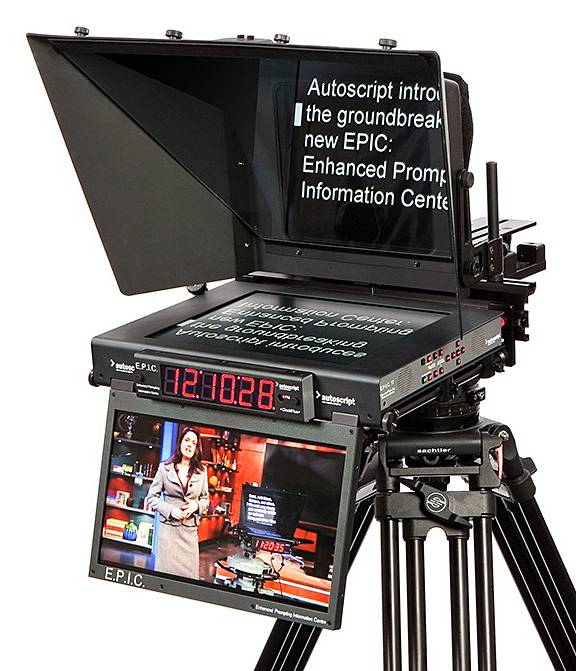 Most studio prompting configurations include a clock and a lower-mounted monitor so the talent can see what's being recorded or broadcast.

On the high-end of the prompter business is now Autocue and Autoscript. On the lower-cost side of the business, there’s been vast expansion in recent years. The players include Prompter People, Listec, Mirror Image, Telmax, ProPrompter, Ikan, Datavideo, CobraCrane, PRomptBox, Barber Tech, JonyPrompter and Dragon Image. Hundreds of low-cost prompters are also manufactured in China.

The market for teleprompters has been simultaneously driven by several trends. One is the sharp increase of global news channels throughout the world in recent years. This has expanded the need for prompting devices. Another was the introduction of Apple’s iPad in 2010, which is being widely used in small prompters, and the commodification of LCD displays and other parts for teleprompters. 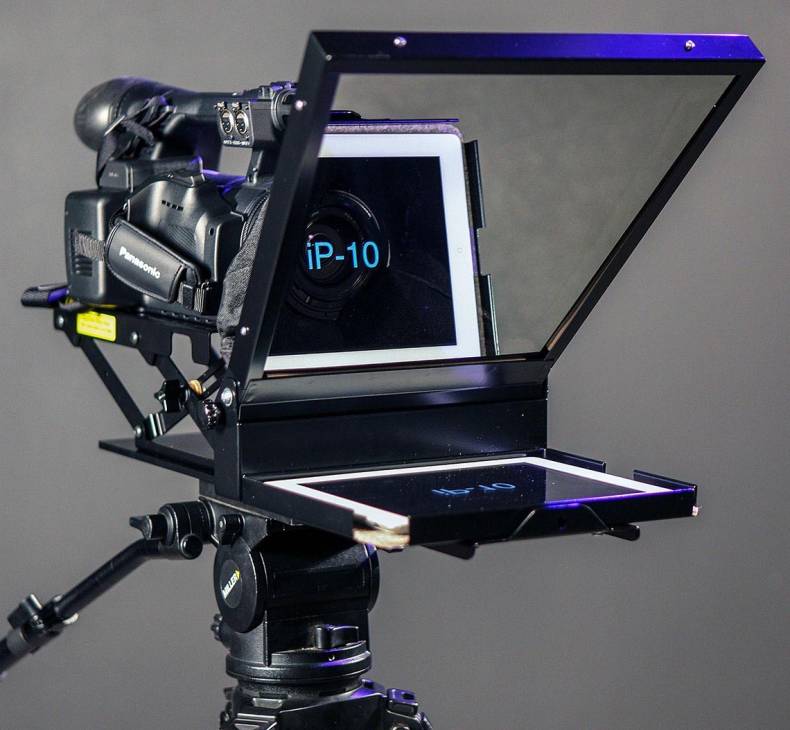 This Mirror Image Teleprompter uses an Apple iPad for the screen.

Today, the prompter market is divided into three categories — small, low-cost starter systems, professional systems and master class systems that require extreme customization. Starter systems using iPads, iPhones and other low-cost displays range in cost from a few hundred dollars to $2,500. Pro Systems appropriate for broadcasters range from $6,000 to over $10,000, depending on the feature sets and size of the display hardware.

“The big differentiators are brightness and contrast,” said Aaron Brady, managing director of Autocue in New York City. “Additional factors include input selection and customization. On the prosumer level, you will be using HDMI, DVI or VGA inputs. But at the broadcast level, you'll be using a far wider range of input standards. Many broadcast systems also come highly accessorized, all the way to networked prompter systems.

“Small one-man-band studios don’t need to accessorize as much. They’ll be running a prompter generally on its own. The broadcasters will add things like clocks, talent feedback monitors and tally lights. Those can really add to the weight and cost of an entire system.” 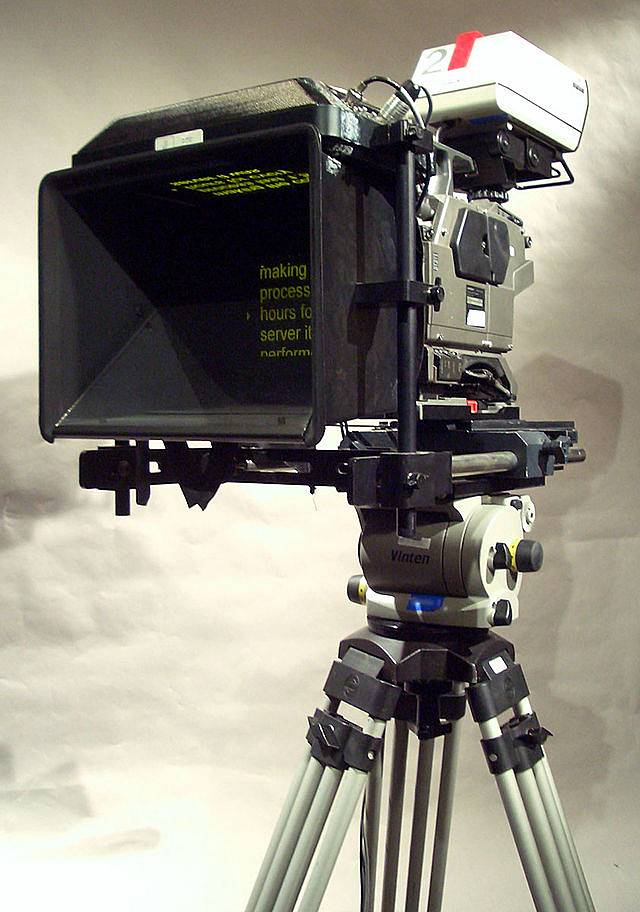 Prompting need not break the bank, but don't expect the bells and whistles a high-end system can provide.

Autocue writes most of its own prompting software. The starter and professional series is stripped down, while the high-end master series has multiple plugins and third party hooks.

“The master level allows broadcast users to highly customize the system,” Brady said. “They can integrate with a newsroom system or with an iOS device. They can prompt collaboratively so you can have IP video generation devices on a wide area network. That would mean a large network like CNN would be able to keep their operator in Atlanta even though they have talent in New York, London, Beijing and other cities all over the world. They can run a collaborative show globally.”

The biggest cost difference between systems is monitor brightness. Monitors bright enough for outdoor use on sunny days cost considerably more than iPads or standard prompter monitors best used in studio environments, Brady said. For outside use, most screens are 12-inches and for studio use the average screen size is 17-inches.

The biggest new trend in teleprompting, Brady added, are highly portable teleprompter systems for mobile use.

“Mobile use includes all of our three product categories — the starter, the professional and the master levels. For the starter, the mobile incarnation is usually the iOs device. For professional users, the answer is a very small, portable prompter they can carry around with extremely high brightness level. For the master, they want the brightness plus the collaborative IT environment where they are able to work anywhere.