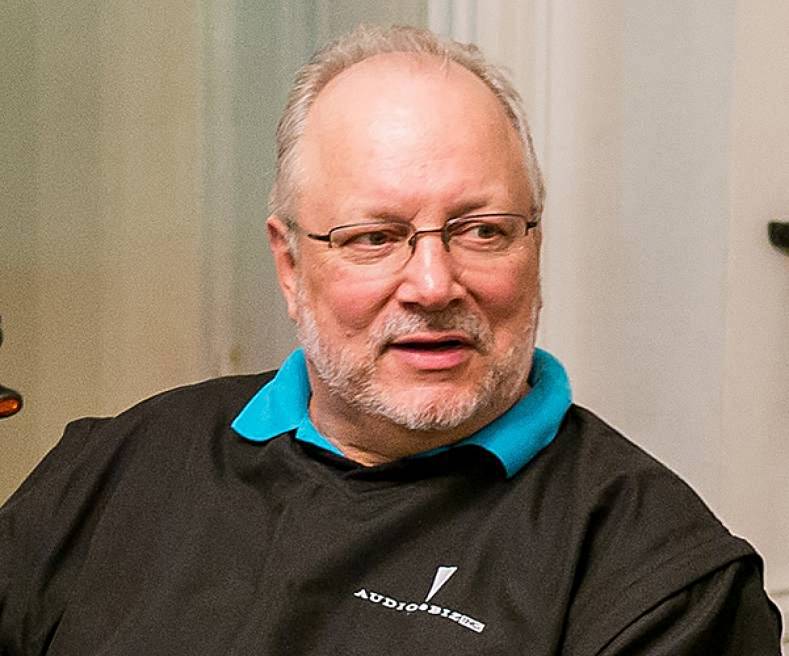 With the FCC’s upcoming auctions of broadcast spectrum, wireless microphones not only face technology challenges, but political ones as well over the next few years.

Wireless microphones are essentially a baby boomer phenomenon — coming of age in 1945 at the end of World War II. Many claim to have invented the microphone without a cord, but it’s uncertain who actually did.

Herbert “Mac” McClelland, founder of McClelland Sound in Wichita, Kansas, built an early wireless microphone in 1951 worn by baseball umpires at major league games broadcast by NBC from Lawrence-Dumont Stadium. The transmitter was strapped to the umpire’s back. Mac may have had a little help — his brother was Harold M. McClelland, the chief communications architect of the U.S. Air Force.

Shure said that its “Vagabond” system from 1953 was the first “wireless microphone system for performers.” Shure’s early system worked about 15-feet from the receiver.

In 1957, Sennheiser — at the time called Lab W — collaborated with the German broadcaster Norddeutscher Rundfunk (NDR), to demonstrate a wireless microphone system. From 1958, the system was marketed through Telefunken under the name of Mikroport. It transmitted at 37 MHz with a range of 300 feet.

The first wireless microphone patent was filed by Raymond A. Litke, an American electrical engineer at San Jose State College. Invented in 1957, Litke’s wireless system was designed for television, radio and classroom instruction. His U.S. patent number 3134074 was granted in May, 1964.

An early Vega microphone had political beginnings, as it was used at both the 1960 Republican and Democratic conventions.

The main transmitter module was a cigar-sized box that weighed seven ounces. The FCC granted Litke twelve frequencies. It was first tested at the Olympic trials held at Stanford University in 1959, then Vega Electronics Corp. manufactured the design later that year. The product was called the “Vega-Mike.”

The Vega wireless system was first used by the broadcast media at the 1960 Democratic and Republican National Conventions. It allowed television reporters to roam the floor of the convention to interview participants where Presidential candidates John F. Kennedy and Richard Nixon spoke into the wireless microphone. Television anchor John Daly praised the microphone during a TV news broadcast in July, 1960.

Wider dynamic range came with the introduction of the first compander wireless microphone offered by Nady Systems in 1976. The Rolling Stones and Todd Rundgren were the first popular musicians to use these systems live in concert. Nady joined CBS, Sennheiser and Vega in 1996 to receive a joint Emmy Award for “pioneering development of the broadcast wireless microphone.”

Since then wireless microphones have been widely used for entertainment events, television broadcasting and public speaking to allow performers to move about freely while using a microphone to amplify or broadcast their voices.

Wireless standards -- there are plenty of them.
There are many different standards, frequencies and transmission technologies used for wireless microphones. Wireless devices can transmit, for example, in radio waves using UHF or VHF frequencies, FM, AM or various digital modulation schemes. Some models operate on a single fixed frequency, but the more advanced models operate on a user selectable frequency to avoid interference and to allow the use of multiple microphones at the same time.

Professional wireless microphones usually transmit in VHF or UHF radio frequencies and have true diversity reception (two separate receiver modules each with its own antenna), which eliminates dead spots (caused by phase cancellation) and the effects caused by the reflection of the radio waves on walls and surfaces.

Each has made significant improvements in the technology while dramatically lowering the prices of entry level models. Systems have also become far more frequency efficient — with high-end models allowing for dozens of different microphones to operate simultaneously. Wireless microphone systems are now analog, hybrid digital or all-digital. 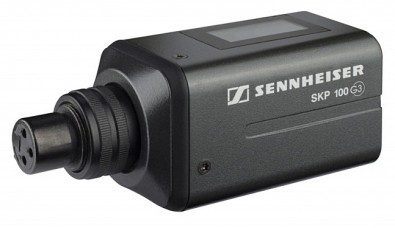 Transmitter modules like this Sennheiser SKP100 G3 can make any microphone wireless.

There are generally three wireless microphone form factors in the designs: handheld (which includes the transmitter inside a handheld microphone; a plug-in, cube-sized module that connects to any standard microphone; and a body-pack, a small battery-operated module that is hidden on the body of the performer. It attaches to a tiny lavalier microphone.

Wireless microphones had few problems in the years before the proliferation of mobile phones and especially smart phones, which created a spectrum shortage. Apple increased the problem when it introduced its popular iPhone in 2007.

In the United States, the UHF band extends from 470 MHz to 698 MHz. In 2010, the FCC issued new regulations on the operations of TV-band devices. The ruling banned wireless microphones operating in the 700 MHz band.

Other countries have similar band limits. For example, Great Britain’s UHF TV band currently (Jan, 2014) extends from 470 MHz to 790 MHz. Typically, wireless microphones operate on unused TV channels, with room for one to two microphones per megahertz of spectrum available.

Expect wireless microphone frequencies to soon change
The future, especially in the U.S., is already bringing more uncertainty. In the middle of 2015, the FCC plans to hold an auction with the intent of transferring spectrum currently allocated for over-the-air television service to mobile broadband.

The auction offers TV broadcasters the opportunity to relinquish or share their spectrum license in exchange for a portion of the proceeds generated by the auction. The broadcasters that operate on channels in the 600 MHz range that choose to stay on the air will be moved to a different TV channel during the subsequent repacking process, which is expected to take at least two years to complete. After that, wireless microphone operation in the 600 MHz may or may not be in jeopardy.

While it is uncertain whether the incentive auction will ultimately be successful, manufacturers are preparing for the possibility of a 600 MHz reallocation. It is not known yet, but wireless microphones may still be able to operate in some pockets of the 600 MHz, following FCC approval, in the planned guard band and the mid-band gap.

Reallocation may vary by market. The FCC plans to pursue a “down from 51” plan where a range will be reallocated, starting from TV channel 51 (698 MHz) on downwards. It is unclear how far down from 698 MHz space will be reallocated, in large part to the voluntary nature of the auction, but it could be as far as 578 MHz.

The FCC wants the allocation between TV and mobile broadband to vary by market, but faces strong opposition from those who want the divisions to be uniform nationwide.

Currently, there are two TV channels in each market that are reserved for wireless microphone and monitor use and are available to any operator. It is unclear whether this will still be the case after the repacking process.

The current situation has created a sense of nervousness among those who manufacture and use wireless microphones. Audio-Technica, a major manufacturer of wireless systems, did an end run around traditional UHF technology with its new System 10 wireless system for cameras, which operates in the 2.4 GHz spectrum.

Jackie Green, vice president of R&D and Engineering at Audio-Technica, said the System 10 helps prevent typical interference issues from Wi-Fi and other devices that operate on the 2.4 GHz band. “We use a new diversity system that works on three levels,” she said. We do the normal frequency, but also add time and space. Even if the signal is exactly the same, if you’re not at the same point in time that signal still will not be a problem. 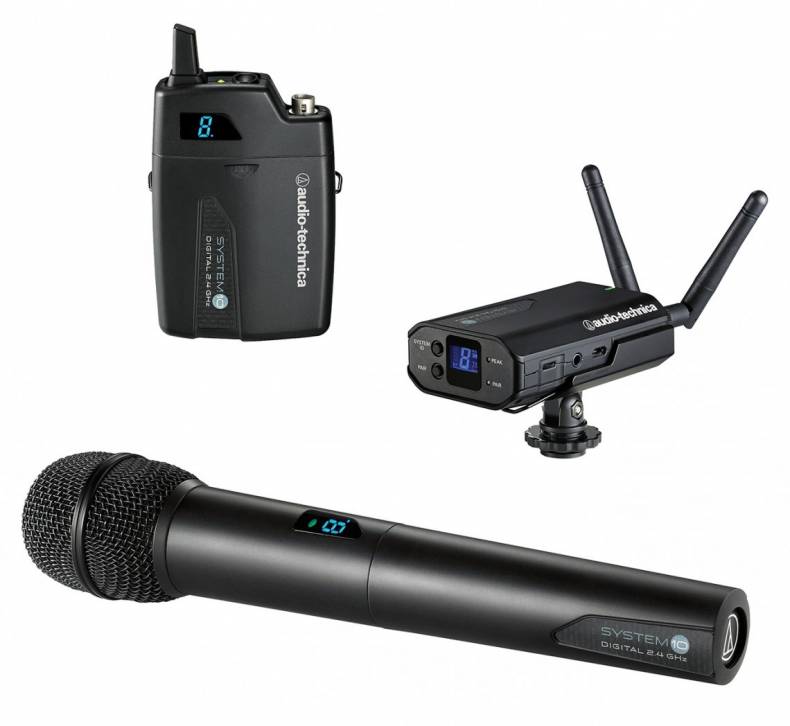 This Audio-Technica wireless microphone system operates in the 2.4GHz band and is said to provide three levels of diversity assurance: frequency, time, and space.

“Obviously 2.4 GHz devices are used everywhere,” she said. “But we tested the system in a theater with all its 2.4 GHz lighting controllers and other devices operating. Plus we set up six different brands of wireless routers all connected to the Internet. We set them at the highest power right next to the System 10 product and our system worked flawlessly with up to eight channels.”

The FCC’s uncertainly over the future of UHF, she said, had pushed Audio-Technica to put research and development funds into the robust new 2.4 GHz wireless technology. Other new products based on 2.4 GHz will be coming soon, she said.

Michael Pettersen, an executive at Shure, another major manufacturer of wireless microphones, noted the use of frequencies always involves the government in any country.

“The airwaves belong to the people. Since that’s the case, the governments of countries have the right to say what frequencies one can use there. The wireless thing is going to get increasingly crowded in the United States. Because everybody is carrying around a smartphone in their pocket these days, there is less and less spectrum for wireless microphones. The FCC is reallocating the TV spectrum away from television stations and wireless microphones and it’s being auctioned for use with cell phones.”

Pettersen said the political environment over wireless microphones in the United States is contentious because of competing uses for very valuable spectrum.

“The government sees billions of dollars to make — not from pro audio — but from Verizon and AT&T. So the available UHF spectrum for microphones continues to become smaller and smaller. What we as manufacturers have to do is become more efficient at how we use the frequencies we have.

“In the 1970s, where you might have been able to fit five wireless microphones on a slice of spectrum, we can now we can fit 40. It’s taking whatever they give us and figuring out how best to use it. Over the next five years, it will get increasingly challenging as this conflict continues.”

Pettersen also reminds users that any wireless microphone system can only be used in the country where it is bought.

Every country has its own set of legal frequencies for wireless microphones. “They shut down a Phil Collins show in Germany,” he said. “It’s so serious that if you buy a wireless microphone in this country and take it to Israel, you are on a military frequency. They don’t like that at all.”

“Even if you use wireless, always carry a cable and wired microphones. Wireless interference can come from many sources and you may not be able to figure it out quickly enough. Always carry a wired backup mic set-up to every event where wireless is being used. That’s the best advice I can give you.”