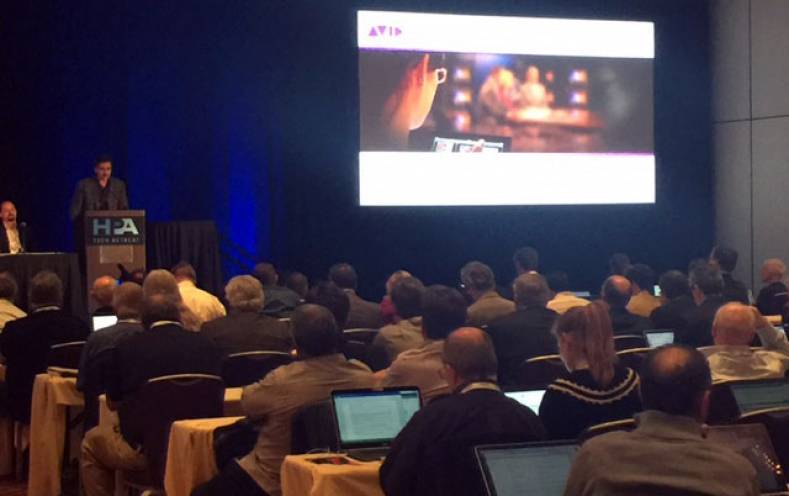 The Hollywood Professional Association (HPA)’s annual Technology Retreat has been a mainstay of the TV broadcast and production and postproduction communities since 1993, when it was run by the International Teleproduction Society; offering presentations, panel discussions, roundtable conversations, and working demonstrations of technologies currently in use and those that are on the horizon. It’s been said that everyone who’s anyone in the professional audio and video technology field considers it a “must attend” event.

This year the HPA Tech Retreat will be held on February 20-24, 2017 at the Hyatt Regency hotel in Indian Wells, Calif. The multifaceted gathering of the industry’s technology elite will kick off on Monday, February 20th (the day before the official opening of the HPA Tech Retreat) with two half-day sessions, one entitled “HPA TR-X,” which will provide a detailed look at the burgeoning fields of virtual reality, augmented reality and mixed reality; and the other on the ATSC 3.0 OTA signal distribution system. Subsequent days will feature presentations on UHD, 4K, IP, and many other technical issues facing engineers today.

Mark Schubin, a television engineer who has been instrumental in programming the HPA Retreat (and is often called its “master of ceremonies”), echoes the sentiment that the HPA Tech Retreat is more than just an informal gathering of like minded individuals. This year he’s giving two presentations: one on Wednesday, Feb. 21st entitled “Technology Year in Review” will cover everything from laboratory experiments to revenue streams. The second, and final presentation of the entire event is called “What the H? Did Pittsburg Give Us Our First Letter?” Schubin said it’s “about Hollywood the place and Hollywood the metonym and how the western Pennsylvania city might have actually created “The Biz” during a period when it was officially spelled without an ‘h.’”

“As I like to say, whatever your question, someone will be there who knows the answer,” Schubin said. “We have not only the top engineers of Hollywood studios, TV networks, and manufacturers in the U.S. and around the world (from Norway to New Zealand, from Mumbai to Montevideo) but also cinematographers, directors, editors, lawyers, economists, academics, and government officials.

“And,” he added, “we don't take anything but the information seriously.”

Alluding to its casual nature, one morning, years ago, Schubin recounts, the president and executive director of SMPTE showed up for their presentation in a bathrobe, sipping martinis. This year Matthew Goldman, senior vice president of technology, TV and media at Ericsson and the current SMPTE president, will be moderating a panel on the broadcast TV industry, with participation from, among others, CBS, Fox and PBS. He’s expected to be fully clothed. 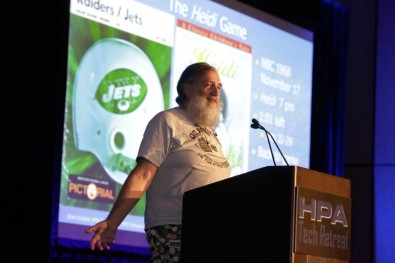 TV engineer Mark Schubin has given many standing-room-only presentations at the HPA Retreat.

The real attraction for long-time attendees is that technology suppliers and TV broadcast competitors come together as one industry to share ideas and help solve problems collectively. Technology manufacturers often use the HPA Tech Retreat to demo their new products and emerging technologies not yet ready (and sometimes never ready) for purchase by the general industry. An added attraction for attendees is the Tech Showcase exhibit floor, where commercial companies demonstrate their technology and network.

“We've had Panasonic engineers trying to make a Sony projector look as good as possible,” Schubin said, “and both companies (along with many others) have introduced new technologies at the retreat; eight years ago, we had a demo of full-motion, full-color holography.”

In past years the HPA Tech Retreat has attracted the top industry-engineering, technical, and creative talent, as well as strategic business leaders focused on technology, from all aspects of digital-cinema, post-production, film, television, video, and related technologies—all there for the exchange of information. Add to that more than 40 lively breakfast round tables, networking time, and the highly anticipated Innovation Zone (where companies and individuals can showcase what they are working on in a collaborative environment), and it’s clear why the event has been fully attended.

This year’s program will include a panel on artificial intelligence and machine learning. There will be another on software-defined-hardware and a presentation that will look at how much dynamic range can be achieved in a real-world movie theater. Another panel will focus on ‘the cloud’ and will be moderated, Schubin said, “by someone who doesn't make money from it.”

Virtually everyone agrees that the HPA Retreat is not to be missed, offering a chance to reconnect with old friends and interface with colleagues without the well-established program tracks that attendees often find cumbersome to navigate.

“We don't have tracks,” Schubin said. “Except for the breakfast round tables, which are a free-for-all, and some pre-retreat seminars, nothing is concurrent. We don't want people only interested in one topic to ignore others; we want everyone to learn from everything presented.”

Those interested are encouraged to register early, as the Retreat has sold out in years past.