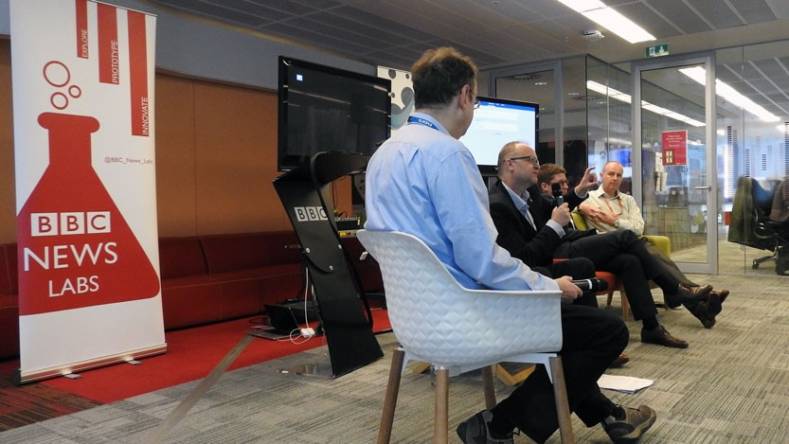 BBC News Labs has been giving the EBU tips on flexible content production.

Innovation has become a mantra for broadcasters, driven in part by the disruption of online content consumption and proliferation of video content sources which now number 1 billion globally by some counts. Innovation is seen as crucial for the very long term survival of traditional public service broadcasting, which must remain relevant by adapting to fast evolving content consumption patterns.

Some broadcasters are at least stepping up to the challenge, as is clearly apparent to inhabitants of Philadelphia where the skyline will in future be dominated by Comcast’s $1.5 billion 60-story, 1,121 foot Innovation and Technology Center, the tallest building in the Western Hemisphere outside Manhattan and Chicago.

While few European broadcasters or operators have Comcast’s resources they are just as serious about innovation, with the EBU raising its game by transforming its Integrated Media Production Strategies (IMPS) programme to focus more strongly on flexible content production. The EBU recognized that one of its members, the BBC, was already ahead of the game both in terms of technology development and equally importantly on the underlying changes in organizational structure needed to breed innovation. The EBU accordingly invited BBC News Labs to a workshop on the theme of how its members should “do innovation”.

The focus on news was significant in that traditional news broadcasting is under threat from the web more than any other TV category. Broadcasters are caught between the challenge to match the ability of individuals on the spot to be where news is breaking and a squeeze on budgets just when they need to differentiate themselves by maintaining high professional standards of coverage.

At the EBU workshop the BBC News Labs team led by digital development director James Montgomery first of all highlighted the obvious point that innovation was crucial for survival. “Innovation isn’t easy, particularly in organizations under financial or competitive pressure, which is the case for most EBU Members,” said Montgomery. “But it is important. It’s neither optional nor marginal. It needs to be central.”

A core message to emerge from the workshop was that establishing the right framework within the organization to encourage risk taking close to the coal face of production was almost more important than the enabling technology. Participants heard how BBC News Labs had been set up differently from R&D departments at other broadcasters, straddling three different departments to drive innovation towards the head of content production. In this way BBC News Labs operates as an incubator, with more than 20 projects running concurrently at a given time. It provides a safe almost “fuzzy” space where small, inter-disciplinary teams can develop prototypes fast without undue interference from management. Team members are removed from day-to-day responsibilities while they work on the projects, yet are located directly in the newsroom among the people who will ultimately use the tools they are developing. The BBC has described it as a safe space where innovation can flourish in the absence of pressure but yet with clear focus on the front line.

Although this approach to innovation at the production level may be relatively unique to the BBC it dovetails with a much more widespread trend in terms of systems integration and software development at a more technical level. This is the trend towards DevOps, meaning the convergence between development and operations during system projects such as migration to cloud DVR for example, designed to streamline the testing cycle so that products or services get to market quicker. DevOps also makes it easier to cut projects down into smaller chunks each of which can be deployed sequentially and therefore again faster, under the banner of microservices.

As it happens microservices orchestration is the core theme at the upcoming EBU Developers Conference 2016 being held on the first two days of November in Geneva. The BBC News Labs workshop therefore helps set the stage even though of course the Developer Conference will be far more technical.

Technology did feature at the News Labs workshop though in discussion of the BBC’s ALTO text-to-speech project, which is indeed innovative and very much a product of the multi-disciplinary approach. The BBC describes ALTO as a virtual voice-over tool for re-versioning video content into multiple languages using text-to-speech voice synthesis. The development was performed by a small multi-disciplinary team drawn from different parts of the organization, followed by a swift development process using fast prototyping, two-week sprints and then daily stand-up meetings to track progress. There was a clear goal to hand the product over to operations as quickly as possible, yet there was an equally clear message that nobody would be blamed if the project failed.

ALTO allows any news editor to generate translated audio tracks with multiple voices. The software then automatically attaches the new translated audio to the video file on top of the natural sound track. It was launched as a pilot service in Japanese on 16 December 2015 followed by a second trial in Russian on 18 April 2016. At a later stage the BBC plans to extend ALTO to generate subtitles automatically and translate graphics as well as name straps.

Among other BBC News Labs projects presented to EBU IMPS participants at the workshop were application of Virtual Reality consumer technology to create more immersive experiences and Atomized News. The latter is aimed at Millennials in the 16 to 24 year old category and as the name suggests means presenting news in constituent parts under topic headings rather than as linear broadcasts. It exploits so called Object Based Broadcasting, where the innovation lies in exploiting metadata describing associations within and between content to break assets down under headings such that they can then be served on the basis of user requests or even known preferences.