As the industry increasingly adopts IP and virtualisation technologies, the role of the video server is rapidly changing toward being a tool for managing the process of converting streams to files and vice versa, whatever flavour those streams/files happen to be in. In part two of an examination of these changes The Broadcast Bridge airs the views of Dalet, Harmonic and Grass Valley.

There are two key advantages of a software-based platform when it comes to handling new formats and resolutions. First, according to Dalet director of marketing, Ben Davenport, is that architecture need not be restricted to a certain frame rate or frame size. Secondly, Dalet feels it can be incredibly responsive in adopting new codecs and standards.

“This enabled us to ensure that Dalet Brio was one of the (if not the) first video servers to market with native UHD support,” says Davenport.

The latest release, 3.4, Dalet Brio features support for the ST 2022-2 and -6 standards for video-over-IP, managed through a new, web-based interface or RESTful API. The product also now supports dynamic audio routing not only on playout but also on ingest, giving extended flexibility in that stream-to-file conversion.

“It seems unlikely that customers will simply replace existing SDI infrastructure with IP, though should they chose to, users will be presented with the same familiar and intuitive interfaces to manage that IO,” says Davenport. “Where IP is adopted for new operational practices, Brio is capable of supporting all-IP or hybrid deployments through a common interface, easing that adoption for users.” 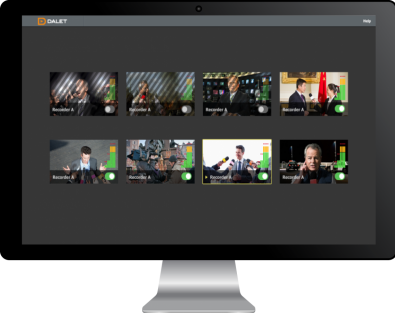 Not specifically as a product, but more as an organisation, Dalet says it is committed to working with other vendors to ensure interoperability – something that will also be key in adopting IP.

“The landscape of video-over-IP is still evolving and will continue to do so for a little while yet,” says Davenport. “When selecting video server technology, it is therefore important to select a platform that can, where necessary, be responsive to that evolution, protecting your investment. It seems unlikely that, ultimately, there will be a 'wrong' path to go down or that this will turn into a VHS vs Betamax debate. In a way that we’ve not really seen before, the whole media and entertainment community (vendors and end users) seem to be pulling together to solve the challenges that video-over-IP presents, and it would appear that this will result in a common solution supported by all.” Davenport adds that he just might be being a bit optimistic here.

As a founding member of AIMS, Grass Valley promotes the adoption of “open and sustainable standards” such as SMPTE-2022-6, VSF TR-04, and VSF TR-03.

“Customers have told us that they have different timetables for transitioning to an IP infrastructure,” says the company's Adolfo Rodriguez, Director, Servers and Storage. “So, Grass Valley is committed to offering products and solutions that are Future Ready. The K2 platform offers IP support today for those who need it, and is easily upgraded to meet the needs of broadcasters as they make the IP transition at their own pace.”

A new addition to the K2 range, the K2 Summit IP, enables SMPTE ST 2022-6 IP connectivity for audio and video in production applications. This summer Grass Valley is introducing support for 2-Sample-Interleave (2SI) and additional implementations of TICO compression.

“All of our current products are 4K capable, and in our roadmap we have plans for supporting higher resolutions beyond 4K as well as higher frame rates,” explains Rodriguez. “K2 Summit IP with TICO lossless transport compression allows 12G 4K (UHD-1/3840x2160p50/59.94) over SDI and IP-based infrastructures with minimal processing and 4:1 compression. This allows a single 3G-SDI cable to carry a 4K signal, as opposed to four 3G cables where the signal will have to be split into four components and then re-assembled.

By providing a broad range of ingest, channel in a box/integrated channel playout and baseband playout features Harmonic says that its Spectrum X offers much more than a conventional video server.

“Supporting internal and shared storage, as well as direct ingest to Harmonic’s MediaGrid scale out storage system, Spectrum enables operators to use one video server for a vast array of video production workflows and broadcast applications,” says Andrew Warman, Director of Product Line Management, Servers and Storage at Harmonic.

The server is software licensed, allowing updates to existing and future features and comprises a standard PC platform with Harmonic-designed SDI hardware and a Linux operating system. It supports codecs including Sony XAVC and Panasonic AVC-Ultra, all DVCPRO, MPEG-2 and XDCAM/XDCAM HD.

“While other video servers require operators to use the same vendor automation for channel in a box or integrated channel playout workflows, Spectrum X is unique in allowing any third-party control system to drive playout, graphics, effects, audio, DVE, clip, live switching and more,” says Warman. “Of course, when Spectrum is complemented by Harmonic’s range of Polaris automation products, operators can easily create channel in a box, integrated channel and integrated master control systems for scheduled and live event workflows. The result is a video server that casts the widest net for ingest, playout and branded output available.”

The platform supports 525/625, 720p, 1080i, 1080p and 4K/UHD, including playout of full-frame UHD-1 resolution media using AVC-based codecs. Since this is a CPU-based product, other resolutions will be accessible in the future. In addition to supporting UHD for playout, Spectrum X also includes channel in a box functionality including graphics branding, live input and simulcast of UHD and HD resolutions driven from onboard or external automation.

When it comes to transitioning broadcasters and playout service providers to IP transition, the Spectrum X features a full set of SDI playout functionality, and supports SMPTE 2022-6 input and output. Critically, it supports the ability to mix SDI and IP I/O for a channel at the same time.

“This extends to workflows where there may still be SDI inputs (ingest or live sources) from an SDI router, but playout needs to be IP, or there needs to be IP ingest or live inputs, to play into an SDI infrastructure,” says Warman. “For those operators that need to support SDI and IP outputs simultaneously, Spectrum X offers SDI and IP simulcast, meaning SDI and IP are played out in sync as a single channel for automation control, with either matching or independent channel branding, effects, audio channel management and more.”

“The AIMS approach has garnered a lot of industry support and appears to be the most likely route to IP for our industry,” says Warman. “Harmonic already supports 2022-6, the cornerstone of the AIMS roadmap and will be offering SMPTE 2110 (VSF TR-03) support as a software upgrade.

However, Harmonic remains open to other IP approaches, dictated by the market. If additional methods gain favour, Harmonic says it can add these to available supported IP protocols.